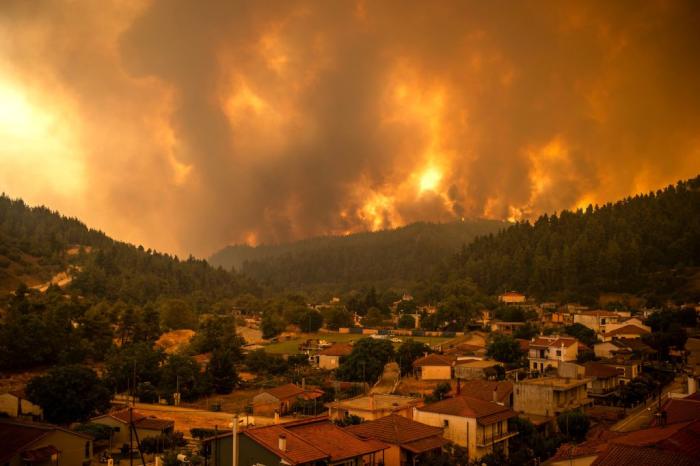 We Have Crossed the Threshold: The IPCC Delivers Its Starkest Warning About the Coming Decades

And so here it is.

The much anticipated IPCC report on the state of the Earth’s climate and humanity’s effect on it has arrived. The International Panel on Climate Change is the world’s leading authority on the field. 234 scientists from 66 countries have spent 8 years pouring over 14,000 research papers in order to deliver today’s verdict on where we stand as a species and as a civilization. The IPCC reports typically lead the conversation around the issue of climate change, with countries—at least nominally anyway (ha!)—taking its findings as a guide for policy (or, you know, empty rhetoric).

It won’t surprise anyone to read that the news isn’t good.

The report describes a planet riven by ‘unprecedented’ changes to its climate brought about by capitalist industry, and it states that the much-touted threshold figure of 1.5 degrees Centigrade above pre-industrial levels—the global temperature rise that must be avoided if humanity is to escape the worst of climate chaos in the coming decades and centuries—is now overwhelmingly likely to be crossed within, at most, the next twenty or so years.

Rapid and wholesale alterations to the world’s systems of production and energy generation are needed if we are to prevent the nightmare scenarios that will follow that temperature being breached. Indeed the IPCC report—the sixth of its kind since the first was released in 1988—describes how the nightmares have already begun, and how the world’s corporations and elites have created a world that is proving to be hostile to human and animal life in a way that hasn’t been the case for thousands or hundreds of thousands of years.

Thanks to the actions of a tiny proportion of the planet’s population, the long period of temperate, liveable conditions that facilitated the rise and flourishing of humanity in the first place is now over.

The report goes on to paint a picture of the planet as it is now, describing how:

- CO2 levels are higher than they have been in 2 million years.

- The frequency and severity of heatwaves and other extreme weather events that we are now seeing are ‘unequivocally’ tied to human activity.

- Some changes to things like ice coverage and sea levels and ocean acidification are now baked in, and in many cases irreversible for hundreds or thousands of years.

- Though every region on the Earth has now been affected by climate change, some areas are being affected faster, including—worryingly—the Arctic, which is heating at twice the rate of other areas.

- While the 1.5 degrees Centigrade goal is now highly likely to be reached, it is also looking likelier and likelier that we will cross the 2 degree goal. 1.5 degrees will still result in increased storms, drought, and floods, but the damage at 2 degrees would be dramatically worse. Every tiny increment above that produces rapidly worsening apocalyptic visions.

The report’s central conclusion is that while we are not ‘doomed’ per se, humanity has crossed over a threshold that it cannot return from, and if we wish to avert the worst of the damage, every single action that can be done and is done will prove to be crucial. Every fraction of a degree of heating that we can prevent will translate to potentially millions of lives being saved.

According to The Guardian, Doug Parr, the chief scientist at Greenpeace UK, said: ‘This is not the first generation of world leaders to be warned by scientists about the gravity of the climate crisis, but they’re the last that can afford to ignore them. The increasing frequency, scale and intensity of climate disasters that have scorched and flooded many parts of the world in recent months is the result of past inaction. Unless world leaders finally start to act on these warnings, things will get much, much worse.’

The IPCC report comes a few months ahead of the Cop26 global climate talks set to be held in Glasgow in November. That summit will be attended by the leaders of 197 countries, each of which is being asked to bring to the table a fresh set of plans on how to reduce carbon and methane emissions.

As per the same Guardian link, the UN secretary general, António Guterres, has called the report ‘a code red for humanity’. He continued, saying that: ‘The alarm bells are deafening, and the evidence is irrefutable: greenhouse gas emissions from fossil fuel burning and deforestation are choking our planet and putting billions of people at immediate risk.”

Today’s report is to be followed by two more from the IPCC. Both are due to arrive next year, with the first focusing on the impacts of climate change, and the second looking at possible solutions.

I’ve been writing about climate change for quite some time. I’ve written about how the Amazon rainforest is now a net contributor to climate change rather than the absorber of carbon that it once was. And about how the tropics are set to be uninhabitable by 2050. About how the world’s fisheries are set to be destroyed. About how Britain’s Ministry of Defense is prepping for the worst possible outcomes and treating them as the most likely scenarios (the absolute cheek of the country that has historically contributed the most to climate change and that helped usher in the carbon capitalist era more than any other to simply shrug its shoulders and prepare to flex its military might as a response to a world it forced into existence). And so on and so on and so on.

I’ve written too about how climate change is affecting my own mental health, and about how that is nothing compared to the impact that is already being felt around the world by those communities that have historically had the least to do with causing climate change. To be quite honest, I’m running out of mental energy. There are days I just want to look away and bury my head in the sand. Of course, that’s exactly what the profit-seeking corporations and enterprises that have been the main drivers of climate change would want us to do, so that they can keep on maximising their income until the world literally collapses around them. We can’t afford to do that.

We need systemic change on a truly unprecedented scale. Every increment will help, but the inequalities and modes built into our current economic paradigm will not allow for the kind of change we need to avert the worst of the disaster to come. Capitalism is incompatible with humanity’s survival on this planet—never mind the billions of other animals that we share our home with. How we choose to address that, and the massive historical and present-day inequalities between the global North and global South, is going to define the next few decades of life on this pale blue dot.

Our warnings were greeted with denial and insults: we were accused of being jeremiahs, killjoys, communists, fascists etc, etc. Even those who paid lip service to the science refused to act on it. They made speeches and set targets, but shunned the necessary economic change.

Even now, as the fires rage, governments delay, obfuscate, look the other way. And we, our senses dulled by consumerism, trivia and the lies and misdirections of the media, remain quiescent.

The longer we wait, the worse it will become. It's too late for the towns and homesteads and magnificent ecosystems that have already been incinerated. It might be too late for much else besides. But we must save all we can. There are no excuses any more.

We must be brave, braver than we have ever been before, pushing past our old timidity and social restraint, standing up to those who wreck our living planet, confronting our own desire for a quiet life of consumerism and complacency.