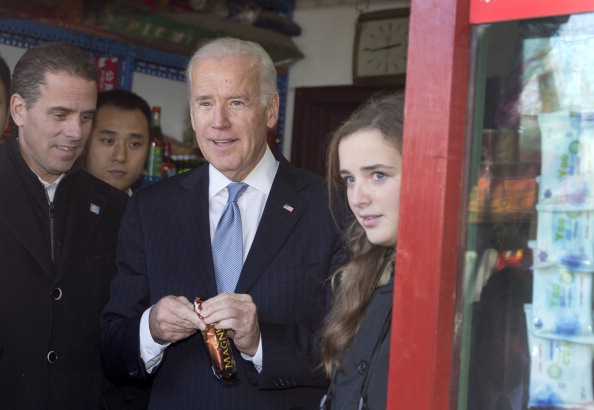 There are 15 days until the election. Here is where we are:

Donald Trump and his surrogates continue to use Fox News to launder Russian disinformation, mostly surrounding Hunter Biden. Over four years with Trump, and barely a week has gone by without multiple scandals erupting in the Trump Administration, so many that it’s exhausting to list them all. With less than a month until the election, Republicans — led by Steve Bannon and Rudy Giuliani, with an assist from folks like Senator Ron Johnson — are trying to get the same story that got Trump impeached a year ago to stick to Biden. Again. And they’re trying to, uh, make some insidious implications, and Maria Bartiromo — who was once a legitimate reporter — is trying to give those allegations air.

Ron Johnson is on Fox News suggesting there's child pornography on the computer that purportedly belongs to Hunter Biden pic.twitter.com/rwvyL1UH4i

I don’t know why they’re so obsessed with this story. Assuming it was 100 percent accurate, exactly as the Republicans have depicted it — that Hunter Biden used his connections to secure a well-paid job on the board of a natural gas company in Ukraine, and then asked his dad to get a corrupt prosecutor fired for investigating that natural gas company — then it would be a fairly small scandal measured against the misdeeds of the Trump Administration, which, for instance, helped Saudi Arabia cover up the murder and dismemberment of a Washington Post journalist because Kushner is buddies with Prince Mohammed of the Saudi Royal family. The Hunter Biden story is absolute malarkey — total made-up bullsh*t that no legit news organization will get behind — but even the worst implications that can be drawn from it are nothing, comparatively speaking.

Meanwhile, the reporting of that Hunter Biden story in the NY Post itself is insane. First off: No legitimate news organization is going to accept evidence from Steve Bannon and Rudy Giuliani three weeks before an election without vigorous fact-checking, which is precisely why Giuliani gave it to the post. He says himself that he didn’t want to take it to another newspaper that might waste a lot of time fact-checking. Hell, even reporters inside the NYPost itself had problems with the story. The guy who wrote it refused to put his name on it. They ended up slapping two bylines on it, one belonging to a former producer on Sean Hannity’s show who did next to no reporting on the story, and the other belonging to a woman who didn’t even know she had a byline on the story until after it was published.

Meanwhile, Guiliani can’t even do a smear job right. Folks who aren’t Sean Hannity or Maria Bartiromo do not give a sh*t about Giuliani’s attempts to sh*t all over Joe Biden.

LOL poor Rudy. Fox and Friends doesn't even give a shit pic.twitter.com/wuklOXiiTy

There is one exchange, however, that has gotten a lot of attention online. Who do you want as President? The guy who berates his kid and hits him in from of his college roommate, or this guy?

pretty impressive for Guiliani to step on his own dick this bad with this attempt at ratfucking pic.twitter.com/4XkPcNIjq7

I’m sure that Don Jr. would prefer Joe Biden for a father, and I KNOW that Rudy Giuliani’s daughter would, because she wrote a whole article on Vanity Fair endorsing Biden and calling her Dad a shitbag.

And yet … despite record-setting early voting numbers among Black people and those over the age of 65, despite how much more money Democrats are raising than Republicans, despite how Biden is dominating television commercial time, and despite a comfortable lead both nationally and in the battleground states, and yet, there is still a huge sense of dread, concerns that the polling leads are a mirage. Is this Hillary all over again? Is Hunter Biden “but her emails?” Is Trump going to eke out a victory in the battleground states because he refused to denounce QAnon?

If you haven’t voted yet, let that fear and dread motivate you! If you have voted already and returned your ballot, I think it’s OK to be cautiously optimistic for the next two weeks, if only for your mental health. I don’t think the “but his emails” thing will work this time around. Joe is more well-liked than Hillary, because Joe is not a woman, and because sexist voters used Hillary’s emails as their excuse not to vote for a woman they weren’t going to vote for anyway.