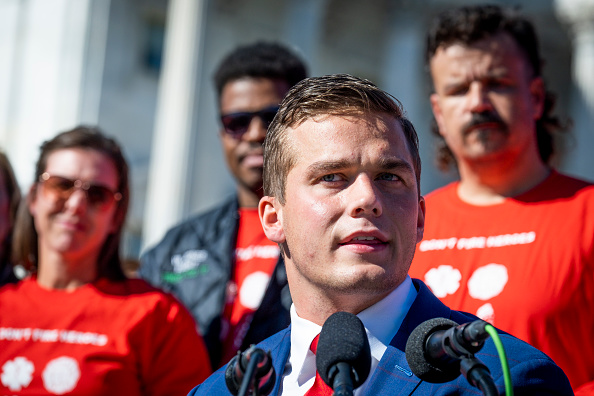 The GOP Should Destroy Madison Cawthorn, But They Should Do It For the Right Reasons

Another day, and another Madison Cawthorn oppo dump. This time, someone released video footage that Wikipedia describes as “Cawthorn naked in bed, thrusting his genitals towards another man’s face.” That other man may or may not be the same person in the other video grazing Cawthorn’s crotch with his hand. Cawthorn has confirmed the authenticity of both videos (as well as the one where he’s wearing a bra on a cruise), and chalked it all up to “horseplay” or “joking around” or the indiscretions of youth.

We’re not interested in linking to the videos or characterizing the content of them. You can make up your own mind, or don’t, because it doesn’t matter. It’s obvious that someone — probably someone within the GOP — is trying to destroy Madison Cawthorn’s reelection chances.

I really hope he doesn’t win, although I’m not confident he’ll be replaced by anyone better (more likely, it’ll be someone with the same political beliefs, but more effective). Madison Cawthorn should not be an elected representative at any level, much less a United States Congressman. But not because of this, but because he’s a buffoon. Because of a lengthy history of sexual harassment and assault. Because he attempted to carry a gun onto a commercial flight, because he was caught speeding while his driver’s license was revoked, because he violated insider trading rules for Congress members, because of a number of ethics violations, because of his extreme far-right ideologies, his sympathizing with white supremacists, for calling a white journalist a traitor to his race for working for “non-white males,” for pushing the Big Lie, and for being involved in the January 6th insurrection.

I’m sure there are many other reasons to sink Cawthorn’s reelection bid or, better yet, expel him from Congress. The Republicans, however, have decided to humiliate him by giving the illusion that he is gay. Maybe he is. Maybe he isn’t. It doesn’t matter, except that it speaks volumes about the Republican party that this is their go-to, instead of the many, many, many other reasons involving corruption, ethical violations, and simple incompetence that the party could level against Cawthorn. Instead, they’re trying to weaponize these videos against him, and it’s working. Because the GOP knows that Cawthorn’s voters will be turned off by them, and they also know that his critics will be just as quick to use these videos to illustrate Cawthorn’s hypocrisy.

They do display an abundance of hypocrisy, and for his critics, it’s been fun rubbing his nose in it, but since when has hypocrisy doomed a GOP reelection campaign? Republicans don’t give a shit about hypocrisy — look at the last … all the years. Republicans care because Cawthorn might be sexually attracted to men, and that’s where they draw the line, not participating and encouraging an actual insurrection or showing an actual fondness for Adolf Hitler. Those things are fine, but ew, he might like boys! THIS MAN HAS GONE TOO FAR.

Screw off, Republicans. Sink him on the merits. Expel him for substantive reasons. Tank his career for the right reasons, and not because he wore a bra on a cruise.

← Netflix Investors Are Suing the Streaming Service for Fraud Now | Reddit Asks the Question: 'What Makes You Not Want To Have Kids?' →