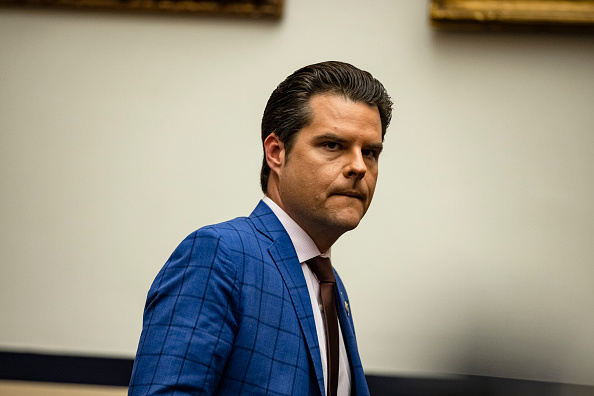 There’s a lot going on in The Daily Beast’s new piece on Matt Gaetz, in which Joel Greenberg — the sleazeball buddy of Gaetz’s — confesses everything to Roger Stone in an effort to secure a pardon from Donald Trump. (Greenberg offered Stone $250,000 to do so, but apparently, Stone could not convince Trump). The part that sticks out the most to me about the confession letter that Greenberg wrote to Stone, obtained by The Daily Beast, is where Greenberg basically guilts the 17-year-old girl with whom he and Gaetz were having sex into apologizing to them for lying about her age.

Greenberg said he learned she was underage on Sept. 4, 2017, from “an anonymous tip” and quickly contacted Gaetz.

“Immediately I called the congressman and warned him to stay clear of this person and informed him she was underage,” Greenberg wrote. “He was equally shocked and disturbed by this revelation.”

Greenberg continued in the handwritten draft that he “confronted” the then-17-year-old and explained to her “how serious of a situation this was, how many people she put in danger.”

“She apologized and recognized that by lying about her age, she endangered many people,” he continued. “There was no further contact with this individual until after her 18th birthday.”

Wait, wait, what? She apologized to them, and then they kept their distance until her 18th birthday, because while it is still amoral and gross, technically it’s legal?

(Oh please, Jerry. You’re the last one who should be shuddering about an underage sexual relationship with a girl.)

In any respect, the “confession letter” that Greenberg wrote to Stone is both hilariously damning and hilariously dumb.

“On more than one occasion, this individual was involved in sexual activities with several of the other girls, the congressman from Florida’s 1st Congressional District and myself,” Greenberg wrote in reference to the 17-year-old.

He could not have wrapped it up in a bow better for authorities. This is not just dumb, it’s Florida dumb. I wonder how many other letters confessing to crimes in an effort to secure a pardon are out there? Stone and Trump’s other cronies must be sitting on a trash heap of leverage?

I’m not a lawyer, but next time someone says “Just go ahead and write down all your crimes and give it to me.” you should probably not do that. https://t.co/FNT9PWrpXn

I also love this text exchange, in which Stone sought to ameliorate Greenberg about his “shot for justice,” while Greenberg prayed to God, as though this were all a case of mistaken identity rather than a confession to paying an underage girl for sex.

An update from Stone came just after midnight on Dec. 8: “Your thing is being looked at and I will have an answer by Saturday as to whether you have a viable shot for justice and how to go about it.”

“Thank you so much Roger,” Greenberg replied. “I am very thankful for you. I pray that the Lord will help. I remain optimistic and will wait to hear back from you.”

The pardon didn’t come, and you know why? “This is treacherous territory with a lot of different players such as Jared and Giuliani playing a hand,” Stone told Greenberg. So, Rudy and Jared were pulling all the strings, huh? Meanwhile, Rudy just had his apartment searched, and his defense to whatever he did is apparently, “Hunter Biden did it!”

Where is Jared these days, anyway?