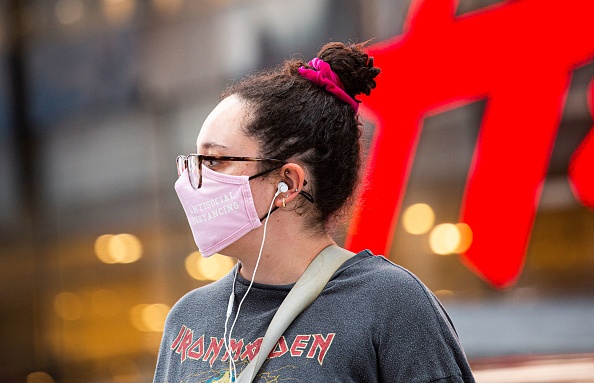 The Delta Variant is a Real POS

Listen, y’all: This Delta variant ain’t f**king around. The CDC is appropriately stepping up its messaging, in fact, after a new document revealed that this variant is as transmissible as chickenpox (1,000x more transmissible than the alpha strain) and that vaccinated folks are spreading it, too. That’s based on a study showing that 882 infections have been tied to a single cluster in Cape Cod and over 70 percent of them were vaccinated.

What does that mean? It means vaccinated people should put their masks back on while they are indoors, although vaccinated people should also know that because this strain is so transmissible, even our masks are less effective against it. So, if you have unvaccinated people (including anyone under the age of 12, obviously) or immunocompromised people in your lives, maybe don’t go to the bar tonight with or without a mask. And please, for the love of God, stop licking subway poles.

Because that’s the other thing: Delta is more transmissible, but the vaccine is still effective at preventing disease. A look at those in the hospital in New York City reveals that most of the people there right now are either unvaccinated or vaccinated but are immunocompromised. I suspect it’s the same all across the country. I mean, obviously, the vaccines work, otherwise numbers would not be significantly lower in places with high vaccination rates. (Hello, Vermont!)

Conversely, things have gone from bad to worse in some parts of the country. One in 5 new infections right now are in Florida, which has returned to its January peak (as has Louisianna). Well done, Ron DeSantis! Although now that sh*t has gotten bad in Florida and DeSantis is desperate enough to push vaccinations, the anti-vaxxer conservatives are coming for him, calling him a sellout and suggesting he is taking kickbacks to push vaccinations. Ha!

What’s Biden doing about it? Besides encouraging more mask use, he’s now requiring that federal employees — including active military personnel — either get vaccinated or face frequent testing and other restrictions. This is starting to spread to private employers, too, including Netflix, Facebook, and Google, who are likewise compelling vaccinations. Granted, with the country already suffering from labor shortages, this may exacerbate the problem when prideful anti-vaxxers walk off the job rather than get vaccinated, like the 150 hospital employees in Houston who were fired or resigned last month rather than get vaccinated. (And yes: Your private employer can legally compel you to get vaccinated). Biden is also encouraging state and local governments to use some of that stimulus money to pay folks $100 to get their vaccinations. It sucks that the government has to pay people to save their own lives, but it is what it is.

What’s the upside here, besides the fact that vaccines are very effective at preventing severe disease and death? It’s that these cases will eventually peak — God knows when — and hopefully, the next waves will be increasingly less severe. Until then, maybe avoid those big gatherings, especially with those who are unvaccinated or refuse to wear a mask. Also, if you have kids under the age of 12, especially in places where they refuse to wear masks, God help you.