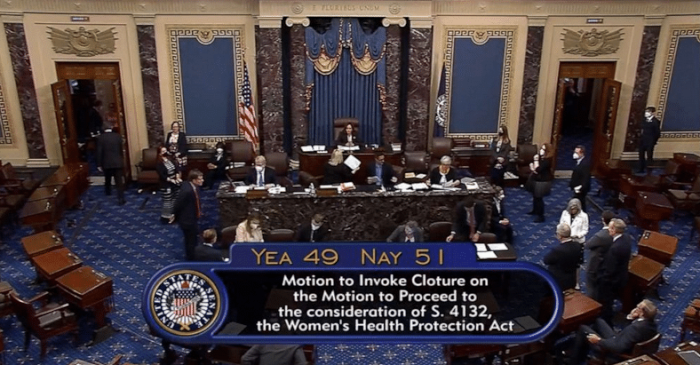 Well, that’s that I guess. I know it was a test manufactured by Chuck Schumer to force everyone to show their hand, and I knew it was destined to fail. It still hurts to know that yesterday the abortion rights bill was voted down 49-51 in Senate. Forty-nine? Who could be the one Democrat who DIDN’T vote yay on that bill?
It was West Virginia’s Joe Manchin, of course. THANKS, JOE!

MANCHIN votes "NO" on the Democrats' abortion rights bill — He was the last to vote and the only Democrat to vote with the GOP.

We needed 60 votes for this bill to pass. It was an impossible goal, we all knew that. I spent all of last week being mad as hell about Alito’s leaked decision. Now I’m just disappointed.
I’m disappointed in Susan Collins for calling the cops about some sidewalk chalk:

I’m disappointed in the mainstream media for taking the side of the judiciary in matters of public protesting and framing protestors as threats to judges’ safety. Remember when The Washington Post changed their slogan to “Democracy Dies In Darkness”? I guess that only applies to some democracy.

To picket a judge’s home is problematic, the Editorial Board writes.

It tries to bring direct public pressure to bear on a decision-making process that must be controlled, evidence-based and rational if there is to be any hope of an independent judiciary. https://t.co/uyXOm6MZH2

While the House Dems marched through the halls to the Senate chamber to protest the Supreme Court’s overturning of Roe v. Wade before the vote, I’m disappointed that no one stuck around during the vote:

But, despite the days of rhetoric leading up to the vote, hardly anyone is sticking around on the Senate floor. pic.twitter.com/6qlJFGfcgT

Back in February the Women’s Health Protection Act also failed to pass a Senate vote (all it got was a lousy 46 votes, those jerks.) Collins and her buddy, Lisa Murkowski of Alaska, introduced a compromise bill that would give the states some rights to enact abortion-related statutes but only if they were in line with the Supreme Court’s rulings in Roe v. Wade and Planned Parenthood v. Casey. Schumer, rightfully, isn’t playing any games with abortion access and rejected that bill outright, saying there’s no room for compromise here. There is no room for compromise. We’ve been in a state of compromise on abortion since Roe v. Wade and look where it’s gotten us. The right to abortion access is an all-or-nothing proposition. Sadly, we’re getting very close to nothing here, folks.

Every day, Republicans say more of the quiet parts out loud about their plans for the future. When the frenzy of anti-trans bills started passing back in March it became clear that all of this was tied together in a terrible way. Once Roe v Wade is officially struck down all of the other laws that are based, at least in part, on a person’s right to privacy are going to be fair game.

In the past week, conservatives have signaled they're coming for:

They're telling you their plan! https://t.co/WQuB4VQ4OI

Texas Governor Greg Abbott is already dreaming of overturning Plyler v. Doe, which protects the rights of undocumented children to receive a public education. If you think he’ll stop with undocumented kids, you don’t know Texas.

But right now we’re here on the cusp of losing Roe v. Wade and we have to deal with that. Evil Turtle, Mitch McConnell has told us that Republicans will likely try to pass a national ban on abortion if they win a Senate majority in the midterms. Turtle-face also said that Democrats are “out of step” with what people want on the issue of abortion:

Today’s Democratic Party is profoundly out of step with the American people on this issue. Their extreme position ignores modern science and public opinion. Leader Schumer wants the Senate to vote again on a Democratic bill that would effectively legalize abortion on demand through all nine months.

But a recent Monmouth University poll belies that idea completely. It found that some 57% of people believe Roe should stand, and 64% believe abortion should be unreservedly legal or legal with some limitations.

So, who’s really the radical minority here, Mitch? It’s you. I know it makes old white dudes super antsy to hear that they’re in the minority on anything. But thems the facts! I suppose this failed test vote could serve up some good talking points for Democrats in the run-up to the midterms if they’re willing to play hardball. We all know that Democrats are terrible at lobbing the grenades sometimes handed to them on silver platters. I’m preemptively disappointed in the Democratic Party right now, too. I’m firmly in the Vote Blue, No Matter Who camp (except for that one guy) but I know that it’s more complicated than that in many parts of our country. I know it’s not as easy as reminding everyone how important it is to vote. I’m going to do it anyway. Be loud about the things you think are important. Abortion access is important. Bodily autonomy is important. If 50-65% of Americans believe that abortion access should be protected in one way or another, maybe they can be swayed to vote their conscience this fall. We won’t know unless we try.


← Is Gwyneth Paltrow Really Selling Bejeweled Diapers? | How Bad Is the Crypto Crash? Bad Enough that Matt Damon Is Trending on Twitter →