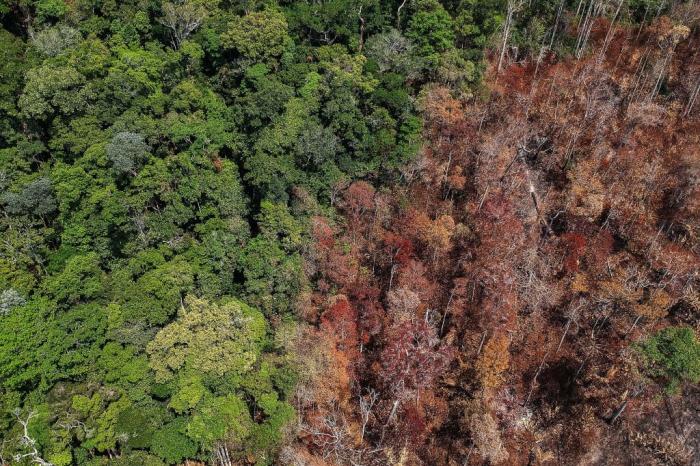 We Are All So Absolutely, Incredibly, Truly Fu**ed

It still feels like something surreal, doesn’t it? Something far away and remote; perhaps just a relic of a dark thought, an ephemeral afterimage of a bad nightmare that will fade in time. Like something that, when, if, it happens, won’t actually affect you specifically. Even though it’s already here. The disappearance of Arctic ice; the collapse of insect populations and mass extinctions of land and sea fauna in general; the warming and acidification of the oceans and the disruption of fragile ecological chains worldwide; the dramatic spike in extreme weather events displacing and affecting millions of often the most vulnerable communities around the world. The capitalist climate catastrophe is very much already here, yet what the world has seen so far is but a meagre tip of the iceberg compared to what is soon to come. We have at most a decade left to comprehensively put in alternative energy systems and cut emissions in such a way so as to stave off the worst case projections for the century—projections that paint a picture of such compelling doom that they might be straight out of a science fiction novel.

Yet I don’t know about you, but because I’m relatively shielded from the very worst of it by my privileged position in the global pecking order, I still often feel as if this is a faraway problem. An issue for others, a crisis for those yet born. And that’s despite my somewhat obsessive interest in the subject matter. I would wager that more than most people I keep up to date with the data, the projections, the discoveries, and the worst case scenarios—to the extent that it’s become a mental health issue for me—and still despite all that I don’t feel it is as being as real as I should. As it is. Climate change is a problem of problems, a complete dynamiting of our systems and processes and—crucially—of the system that contains all the others. We’ve never faced anything like this. We are not just under-prepared as a species, but we are rushing headlong into the maw of death, in a way that to any outside observer would surely look like suicidal glee. That’s majorly due to the vested capitalist interests that prize short-term profits over long term survival, but tied up into this is the conceptual difficulty of dealing with such a vast, all-encompassing problem, especially on a collective level.

It doesn’t help that even our brightest minds, singularly focused on the problem, are learning as they go along, forever uncovering new, further boundaries of our ignorance. Sometimes it seems as if a week doesn’t go by without a new wrinkle to the story of how we are so incredibly fu**ed. The latest wrinkle? Well, only the revelation that it looks like that the Amazon rainforest—one of the single most important entities on the planet when it comes to survival of life as we know it thanks to its ‘lungs of the Earth’ ability to absorb vast quantities of carbon in the atmosphere—may be turned from a carbon absorber, into a carbon emitter by climate change. And, uh, when? Within a decade. As The TERF Guardian reports:

Tropical forests are taking up less carbon dioxide from the air, reducing their ability to act as “carbon sinks” and bringing closer the prospect of accelerating climate breakdown.

The Amazon could turn into a source of carbon in the atmosphere, instead of one of the biggest absorbers of the gas, as soon as the next decade, owing to the damage caused by loggers and farming interests and the impacts of the climate crisis, new research has found.

If that happens, climate breakdown is likely to become much more severe in its impacts, and the world will have to cut down much faster on carbon-producing activities to counteract the loss of the carbon sinks.

The Amazon’s transformation from a brave sentinel holding the wolves at bay at the door to a snarling werewolf turning its sights inwards is a prime example of climate change being the ultimate problem of problems. Even the things that we turn to for hope will be morphed by this poison and will help to damn us.

As the Imperialist Guardian report continues:

“We’ve found that one of the most worrying impacts of climate change has already begun,” said Simon Lewis, professor in the school of geography at Leeds University, one of the senior authors of the research. “This is decades ahead of even the most pessimistic climate models.”

For the last three decades, the amount of carbon absorbed by the world’s intact tropical forests has fallen, according to the study from nearly 100 scientific institutions. They are now taking up a third less carbon than they did in the 1990s, owing to the impacts of higher temperatures, droughts and deforestation. That downward trend is likely to continue, as forests come under increasing threat from climate change and exploitation. The typical tropical forest may become a carbon source by the 2060s, according to Lewis.

“Humans have been lucky so far, as tropical forests are mopping up lots of our pollution, but they can’t keep doing that indefinitely,” he told the Guardian. “We need to curb fossil fuel emissions before the global carbon cycle starts working against us. The time for action is now.”

‘Feedback mechanisms’. ‘Tipping point’. These are phrases that keep cropping up in climate change research. Author David Wallace-Wells spends the opening parts of his book ‘The Uninhabitable Earth’ describing these phenomena in depressingly evocative ways:

It would seem, then, that in the face of such overwhelming, runaway armageddon, the temptation would be to despair. To withdraw into a shell of hopelessness and nihilism. If you’re in your later years, perhaps it’s easy to stick your head in the sand and await the small, private end that will come for you before the void opens up to swallow the rest of us all together. Both positions reveal huge amounts of privilege, and are unacceptable. We are all in this together, now more than ever. You know all those disaster movies that we watched in the 90’s? That first act where the shadow rises and the tidal wave builds. We’re living in it right now. So stand alongside the young climate activists who are fighting for the right to live. Stand alongside Mari Copeny and Jamie Margolin and Xiye Bastida and Elsa Mengistu and Isra Hirsi, Ilhan Omar’s daughter, singularly brave souls who have taken on a burden that no-one of their age should ever have to do, because they have no choice. Get involved in whatever project can help even a little bit, because this fight is not All or Nothing. Every single 0.1 degree of warming we can prevent will lessen the damage significantly. So fight for a green socialism. Fight against the billionaires. And if you’re in America, for the love of god fight like hell for Bernie Sanders and his Green New Deal.

← Nick Offerman Being Silly For St. Patrick's Day Is Very Hot | Jonathan is Dead on 'Riverdale'? Wait! Who Is Jonathan? →