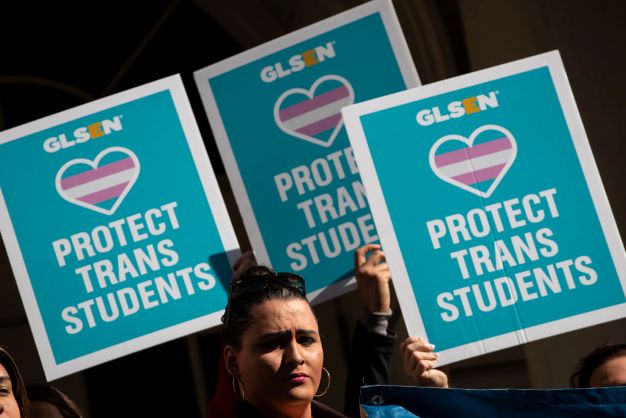 Long, deep sigh. I try really hard with Texas and Florida. OK, I don’t actually try that hard with Texas because I prefer my Mex without the Tex and my BBQ from the Carolinas. But they’re both extra special dumpster fires right now at the legislative level and it makes me want to throw things that break with loud, satisfying, noises. How far do you think I can throw a couple of Governors?

Last week, Florida fast-tracked two devastating bills pushed by Governor Ron DeSantis. The “don’t say gay” bill would ban discussion of LGBTQ+ topics in primary grades and the Stop Woke Act would allow parents of students to sue schools teaching critical race theory or anything that could make students uncomfortable. That’s not vague at all.

🚨 ALERT 🚨 @GovRonDeSantis is fast-tracking the #DontSayGay bill, banning discussion of LGBTQ people or issues in classrooms. Help us stop the DeSantis Censorship and Surveillance State agenda.

I’m going to say this again, even though I know you all know. Some other people continue to be complete f*cknuts about it so it bears repeating. No one is teaching anything that vaguely qualifies as “CRT” (Critical Race Theory) to anyone outside of specialized, graduate-level law classes. Just because our society’s history of racism (and sexism, and homophobia, and … oh, you know) makes you uncomfortable doesn’t mean it shouldn’t be taught. It goes without saying that just because you ignore something doesn’t magically blink it out of existence.

If we’re going to ban discussion of things that make students uncomfortable I would like to suggest we start with algebra and then move on to covalent bonds. If learning about the struggle for equality that Black and brown people have been fighting in this country since 1619 is making some students uncomfortable, those are the kids who would most benefit from these lessons. You can’t hide from our history, you can’t erase it and you can’t disown it. It’s ours — the good, the bad, the ugly, the ridiculous. All of it, all together, is what is at the heart of our country. The earlier we learn how to talk about it, the more likely we are to eventually, some day, reckon with it and make it right. Somehow.

You can’t “catch” gay by talking about it so Florida is also doing an incredibly harmful disservice to its youngest citizens with this “don’t say gay” muzzle. This is not to mention the irreparable harm that is being done to members of our LGBTQ+ communities in Florida, and all around the country, as they watch this bill (and its fellows) get thrown around as if their lives mean nothing. As if they can be erased. It’s hard enough to be a kid who is questioning their gender identity without injecting adult politics into the picture.

The Florida bill known as Don’t Say Gay Is fucking disgusting. Any adult who participates in that piece of shit should be dragged to hell by their taint hairs and left to roast for a million years please let me know if I’m being too “over the top”

Florida State Rep Joe Harding also introduced an amendment to the “don’t say gay” bill that would require schools to “out” students to their parents if the school discovered they were questioning their gender identity or … what? I don’t even know, boys wearing eyeliner? Girls in slacks? After some of his colleagues on the other side of the aisle spoke out eloquently against the proposed bills, the amendment was removed.

I asked the #DontSayGay sponsor to explain what topics about LGBTQ people like myself he considers to be inappropriate in our schools.

Speaker Sprowls told us not make things personal, but for me that's really hard— attacks on our community are always deeply personal to me. 😢 pic.twitter.com/MDnxT5s4PA

For two hours, Democrats like @CarlosGSmith, @micheleforfl, and @AnnaForFlorida urged them to support amendments to make it less cruel.

The GOP voted them all down.

This was a remarkable scene: pic.twitter.com/b5QpQaLB0n

This week Texas said, “Hold my Shiner Bock” when Governor Greg Abbott and Attorney General Ken Paxton declared gender-affirming treatments — such as puberty blockers, gender affirmation surgery, and hormone treatment — as child abuse. The Governor also directed the state’s Family and Protective Services agencies to begin investigating the families of trans youth and prosecuting anyone who is providing any sort of care for their own trans children as child abusers. This could mean children are pulled out of their homes and put into state custody. It could mean that teachers and doctors will face prosecution for not reporting these families to the state. I don’t have much to say about this that wouldn’t just be published as a string of special characters because this is disgusting. It’s effectively a ban on transgender children in the state of Texas. It is one nightmarish step away from requiring trans youth to go through conversion therapy. You may say to yourself, well I’m not trans, neither is my kid and we don’t live in Texas sooooooo. Well listen bub, I hate to break it to you but if you think they’re going to stop after taking away the rights of trans kids in Texas, you’re an idiot.

Just like we’re seeing the fight to dismantle Roe v. Wade morph into a fight against birth control (again) these laws being put in place that “only” affect the gay and trans communities in super red states are just the beginning. You know what, even if they weren’t — even if all that was at stake were the lives of some kids in a couple of states — isn’t that enough? Shouldn’t we be fighting for these kids as if they were our own? Shouldn’t their rights, and their lives, be as important as anyone else’s? We’re all just trying to live our lives and love our people.

Every Trans person is the bravest person I’ve ever met. Choosing to live your truest life in the face of adversity in a world that couldn’t care less is just about the realest thing you could do.

We’re not just breathing, but living.

This is frankly terrible, and we all need to desperately work to love and protect trans communities right now. Just impossible to overstate how bad it is. #TransRightsAreHumanRights https://t.co/3Pv2sKyFZ1

There’s no reason to legislate LGBTQ+ people out of existence except fear. There’s no reason to legislate properly taught history out of the classrooms except fear. But what are they afraid of? They’re afraid that the waning population numbers for “white” Americans mean they’ll be in the minority soon and will find the tables turned on them. They’re afraid that a Christian God will smite them into a lake of fire if boys aren’t “boys” and girls aren’t “girls.” Well, guess what? “White” doesn’t mean anything and God’s greatest commandment was to love each other and treat each other as we ourselves would be treated. This is the one rule that transcends all others across every religion going back to Zoroastrianism. And if you can’t do that, it doesn’t matter what good deeds you think you’re doing with your Quiverfull movement or your hateful rhetoric.

Really seems to be a race to the bottom between Florida and Texas these days. DeSantis and Abbott just egging each other on in their endless culture wars and targeting of whichever marginalized group they think is most vulnerable at the moment.

I don’t have a lot of hope that Florida or Texas will magically turn blue and vote these heinous a$$holes out of office any time soon. Texas tried, and failed, to pass this bill last year. So I do have hope that the average citizens of those states, and the others, can come together to make our voices heard and lend our help to the organizations who are fighting these awful bills and laws that seem to be snowballing.

TransEquality has a Texas Action Center

Lambda Legal has a Transgender Rights Toolkit on their website.

The ACLU is always accepting donations and they’re very good at being loud in court.

Act Blue/Equality Florida is fighting against the Florida bills here

Here’s where you can share your opinion with Texas’ Governor.

Here’s where you can share your thoughts with Florida’s Governor.

If you live in Florida or Texas, I strongly urge you to vote, get your friends and family to vote, maybe sign up some neighbors while you’re at it. Perhaps offer some folks a ride to the polls. The rest of us can contact our Senators in support of the long-overdue Equality Act

Be vocal in your support of LGBTQ+ rights. Be vocal in your love for our LGBTQ+ kids and adults. Shout it out on social media, and in person. Let them know we’ve got their backs in this fight.

Hi! In light of our home state of Texas being under the continued leadership of a monster, we encourage you to join us in funneling that anger into action. If your finances allow it, consider making a donation to @MontroseCenter. https://t.co/gXjGkgQkN3

The despair and frustration is real. Just leave trans people alone. Just let trans people, including and especially kids, live their lives. Sending all my love and support to my trans friends. I know it's not nearly enough — you deserve so much better.

Abbott Elementary is the only Abbott we acknowledge.