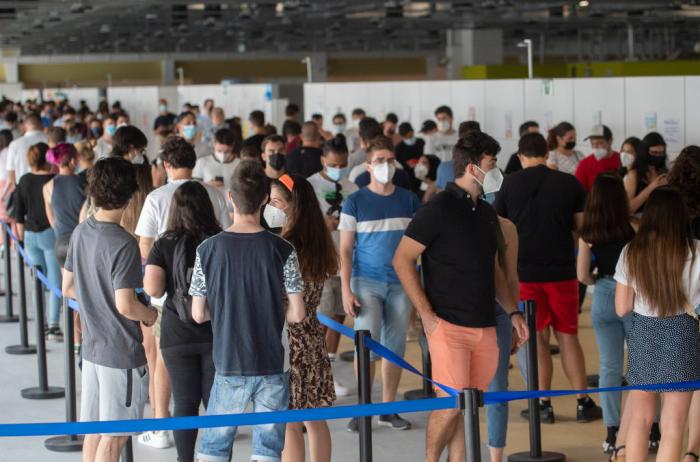 Tennessee Sides with Tetanus, Polio, and HPV in the Fight Against Vaccines

Do you know what I miss most about my youth? It’s not the lack of back pain or all the free time, though those were great. It certainly wasn’t all the virginity. I miss having the time to absorb the first terrible thing before the next one starts. Blame the 24-hour news cycle or the Time Variance Authority, but this constant acceleration of the timeline is absurd. We haven’t even gotten through our current pandemic, and here’s Tennessee starting up the next. Which pandemic? That remains to be seen.

Fresh off their crusade to make trans kids as miserable as possible, Tennessee Republicans forced their health department to cease all vaccine outreach to anyone under 18. Not just Covid-19, though that was the impetus. All vaccines for all illnesses. The Tennessee Health Department may be dissolved entirely because they did their job.

The great state of Tennessee already fought health crises about as well as they do civil wars, given their ranking in national healthcare and their skyrocketing Covid numbers. This particular crisis began because Republican lawmakers and childhood disease enthusiasts were infuriated to learn the Mature Minor Doctrine allowed teens aged 14-18 to get vaccinated without parental permission. It makes sense. Regressive, religious fundamentalist parents are not capable of making rational healthcare decisions for their children. This may go a long way in explaining why Tennessee has the 10th highest rate of teen pregnancy in the country as well as some of the highest rates of STD transmission. The Mature Minor Doctrine was used 8 times this year, and 3 of those were by the children of the Health Commissioner herself. But the child of Baptist fundamentalists may want the HPV vaccine despite their parents’ opinions. Or DTAP, or measles, or the damn chickenpox. The Mature Minor Doctrine exists specifically to work around these sorts of fundamentalists. Unfortunately, the fundamentalists now control everything.

Tennessee’s top vaccine official, Dr. Michelle Fiscus, was unceremoniously fired on Monday for the decades-old rule. In addition, the Health Department has been ordered to stop all vaccine clinics at schools, even if they’re for adults. In many small towns, elementary or high school gymnasiums are the only indoor spaces large enough to hold a crowd. That spells the end of rural vaccination drives, and not only for Covid — flu clinics are also out. Postcard reminders will no longer be sent to those teens requiring a second Covid shot. With a vaccination rate of only 38% and no chance of reaching even 50% before next March, the department is hamstrung. Worse, they can no longer use proactive outreach to inform parents and students about routine vaccines like DTAP, and can’t do anyoutreach about HPV. This is where they show their hand. As usual, it comes down to sexual repression. Covid-19 is merely an excuse to do something the fundamentalists running Tennessee wanted to do since it was announced people might engage in recreational sexual activity without worrying about genital warts. I can’t imagine punishing my daughter for premarital sex by forcing her to get HPV and have a baby, but then, I’m not a bad parent.

Next to fire and sanitation, vaccines may be the most effective life-saving advance in human history. It’s no exaggeration to say vaccines save millions of lives every single year. Despite their overwhelming success and the fact they’re almost entirely risk-free, the same brand of uneducated, ignorant, backward thinking that led to George Washington’s death via blood-letting continues to put us all at risk. It’s well past time to accept that anyone so anti-vaccine is not a good but misguided person. People who use a religious exemption to get out of their public health responsibilities are not good people. They are selfish and vindictive, more interested in keeping their children sick and under their thumbs than they are in any actual wellbeing. We know this to be true, because the same people against vaccines in general and the Covid-19 vaccine, in particular, are the same ones against face masks. They are actively on the side of the Covid-19 virus. And HPV, and tetanus, and flu, and any other illness their children might get.

This isn’t a condemnation of the whole state. Plenty of parents want to vaccinate their kids. The Health Department and any number of doctors are outraged at this heavy-handed conservative influence on public health. But so long as the state is run by religious fundamentalists with a hard-on for sexual repression and communicable disease, nothing will change. If anything, their influence will spread, and it won’t be long before elected conservatives in other southern and midwestern states begin pushing for the same rollback of vaccination programs. Today’s Republican party demonstrated repeatedly that their ideal citizen is sick, uneducated, and poor. Peasants, in other words. It took 245 years and an orange moron in the White House, but Republicans have succeeded in making one-third of Americans long for the good old days of monarchs and death by plague. Here’s hoping we can get them out of power before we end up back in the Dark Ages.