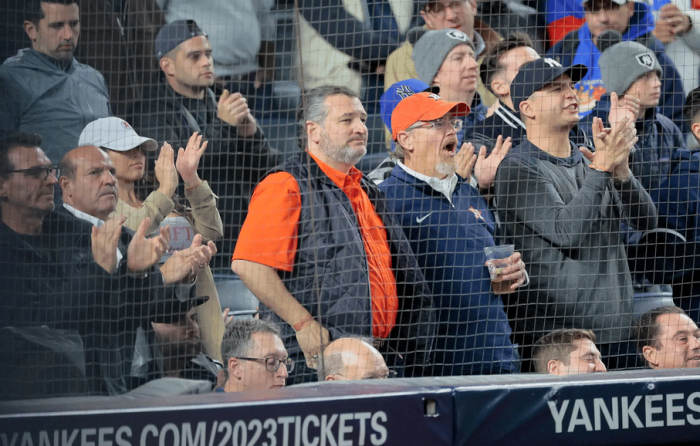 Ted Cruz Gets A Proper Bronx Welcome To Yankee Stadium

My condolences to all of the Yankee fans in my life on their ALCS loss to The Houston Astros last night. The Yankees are not my team, with continued regrets to half of my family, but I gotta say that their fans sure do know how to make a stupid, racist ass feel welcome in The Bronx.

Ted Cruz, who has zero self-awareness, showed up at last night’s rain-delayed game. Ostensibly he was there to cheer on The Astros. But he’s the one who got cheered. The ol’ Bronx Cheer that is.

"You f*cking loser. Racist piece of sh*t. Go back to Cancun"

That’s the deluxe version of The Bronx Cheer. It only gets upgraded on special occasions, or for the most soulless bastids who dare to show their face in The House That Ruth Built (yes, I know it’s an entirely new stadium but the point still stands.)

I invite you all to become honorary New Yorkers and live in that video for a little while today. Just let all of that animosity wash over you, and give you strength in these last two weeks before Election Day. There are actual political issues I could be reporting on right now, but I haven’t quite figured out how to write about this sort of thing without putting a hole through a wall.


← The Nanny Now Claims that Florence Pugh and Harry Styles Had an Affair | Watch the Trailer for the Inexplicable Sequel to 'R.I.P.D.', 'R.I.P.D. 2' →