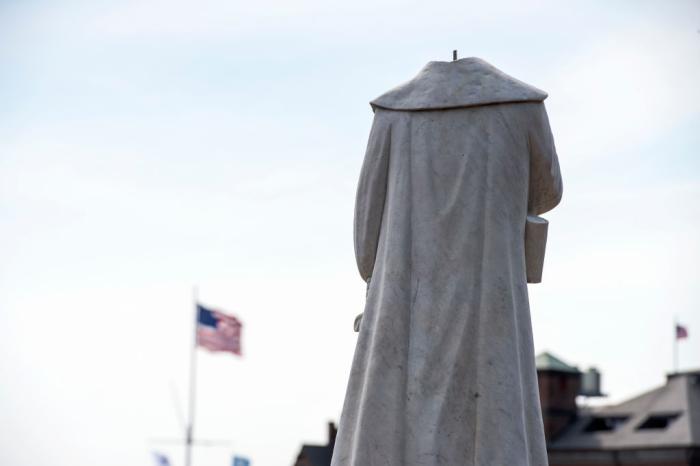 Black Lives Matter protests may no longer fill your timeline, but they are going strong across America and around the globe. The demonstrations have spurred renewed conversation about police brutality, systemic racism, and white supremacy that infects much of American life. Plus, these protests have spurred a renewed call for dismantling tributes to these societal evils. Confederate monuments and slaver statues are falling so frequently that this is the third round-up of such news we’ve done in under two weeks!

The pic on the left is pure poetry https://t.co/31tkdN05BZ

Across the nation, Christopher Columbus statues are being targeted by vandalism because the long-heralded explorer was a colonizer, slave trader, and tyrant whose greatest accomplishment was discovering a land where untold indigenous people already lived.

In Boston, Massachusetts, a Columbus statue had been repeatedly vandalized during Black Lives Matter protests before being beheaded on Tuesday night. Following that, the city’s officials took the decapitated statue down. (CNN)

Protesters in Virginia tore down a statue of Christopher Columbus, setting it on fire and throwing it into a lake. Protesters said: "We have to start with the people who stood first on this land."

It was replaced with the words: "Columbus represents genocide." (Photos: AP/WWBT) pic.twitter.com/UPMLHg1fKQ

In Richmond, Virginia, a Columbus statue was dismantled by protesters, then pitched in a lake. (CNN)

Also in Richmond, protesters toppled a statue of Jefferson Davis, who was the president of the Confederacy. Mayor Levar Stoney had previously announced plans to dismantle the structure along with three other Confederate commemorations; however, that proposal wouldn’t be introduced until July. (NYT)

Organizers were from American Indian Movement & footage from moments ago: pic.twitter.com/nZIb780wva

In St. Paul, Minnesota, protesters lassoed a statue of Christopher Columbus that stood in front of the state Capitol, then tugged it off its pedestal. The demonstrators announced their plan ahead of time on social media, and police and politicians pronounced hopes for an alternative, but ultimately did not intervene. (Star Tribune)

Across our northern border, residents of Montreal are employing a petition to pull down a statue of John A. Macdonald, the country’s first prime minister and a proud white nationalist who enacted blatantly racist policies. The petition notes its organizers were inspired by the BLM movement and Americans’ efforts to tear down Confederate statues to combat the damaging impact of whitewashing our collective history. (Change.org)

Across the pond in Plymouth, England, a public square will be renamed so it no longer will pay tribute to Sir John Hawkins, an Elizabethan sailor known as the first English slave trader.

In a statement, Plymouth City Council leader Tudor Evans said, “This terrible event in the US illustrates how deeply discrimination and oppression both past and present are felt, and it has highlighted once again that Plymouth needs to continue to acknowledge some aspects of its own past.”(BBC)

The statue of Robert Milligan, slave trader and founder of West India Docks, has been removed. @SkyNews #BlackLivesMatterUK pic.twitter.com/Se0JXougxd

The Museum of London Docklands took down a statue of prominent British slave trader Robert Milligan, which sat outside their building.

The museum offered the following statement about the dismantling, “The Museum of London recognises that the monument is part of the ongoing problematic regime of white-washing history, which disregards the pain of those who are still wrestling with the remnants of the crimes Milligan committed against humanity.”

London mayor Sadiq Khan has called for a re-assessment of all of London’s statues and street names, urging that any that glorify slavery should be removed or renamed. (BBC)

Statue of Belgium's King Leopold II is removed in Antwerp https://t.co/UlOOmdC6ej via @MailOnline

We have an update on Belgium’s efforts to tear down tributes to colonizing King Leopold II. Last week, protesters in Antwerp set their Leo II statue on fire. This week, authorities officially took it down. Petitions to remove others in Ghent and Brussels are ongoing. (NYT)

NASCAR has announced they are banning the Confederate flag from all events and properties. This proclamation came two days after the racing organization was challenged to do so by Darrell “Bubba” Wallace Jr., the first Black driver in 50 years to claim victory in one of NASCAR’s top three national touring series. Wallace said “bravo” over the news of the ban, and went on to race Tuesday night in a car that’d been repainted to read “#blacklivesmatter.” (NYT) 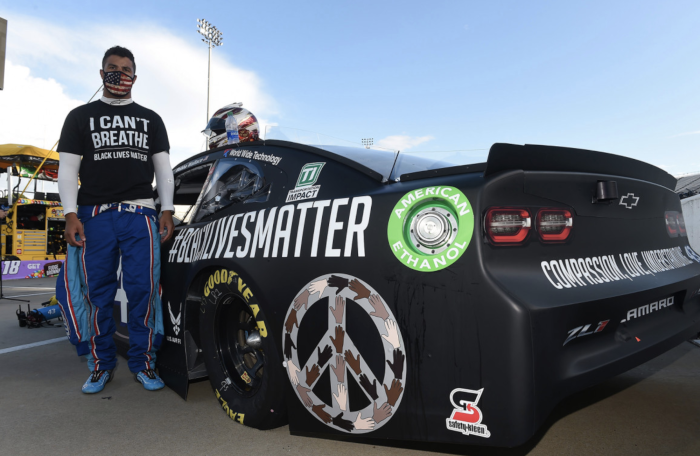 The Navy has also announced they will no longer fly the Confederate flag, nor will this symbol continue to be painted on warships, submarines, and bases. They are following in the footsteps of the Marine Corps, who announced such a change back in February. (Task and Purpose)

The Army is considering renaming 10 bases named after Confederates leaders. As writer Jeff Schogol explains it, “The long-standing issue of why the Army honors Confederate officers who betrayed their country during the Civil War came under renewed scrutiny in February when Marine Corps Commandant Gen. David Berger announced that Confederate flags and other paraphernalia would be banned from Corps installations.” (Task and Purpose)

But hold up, President Donald Trump has vowed to put a stop to that. The White House said he’d even refuse to sign the annual defense authorization bill to keep the names of treasonous racists on Army bases. (NYT)

Meanwhile, Trump’s star on the Hollywood Walk of Fame has been destroyed again. This time it’s been spray-painted black and smeared with sh*t. Previously, the star has been spray-painted with a swastika, a “mute” symbol, spatter in spit, shattered by a sledgehammer and a pick-ax. Yet the Hollywood Chamber of Commerce keeps replacing it on the basis of preserving the star for historical value. (LA Times)

In Nashville, Tennessee, other Republicans blocked the removal of a bust of Nathan Bedford Forrest from the state Capitol in an 11-5 vote. Forrest was a Confederate General who was also a noted member of the Ku Klux Klan. His likeness was added to the Capitol building in the 1970s. (WBIR)

In related news, there’s a petition to officially designate the KKK as a terrorist organization. Despite, the fact the KKK is a white supremacy group known chiefly for harassment and violence against Black Americans, it’s somehow not already designated as such. (NY Post)

In TV news, copaganda shows are being shut down. Last week, two popular police documentary series were pulled off air, Paramount’s Cops and A&E’s Live PD. The protests over the death of George Floyd, who was killed by an officer, was directly stated as the cause for the schedule change. This week, both networks have announced the cancelation of these shows.

Live PD was one of A&E’s most-watched shows, which might be why the network teased a potential return, saying, “Going forward, we will determine if there is a clear pathway to tell the stories of both the community and the police officers whose role it is to serve them. And with that, we will be meeting with community and civil rights leaders as well as police departments.”

Cops has run since 1989. To learn more about why it’s a racist monument, we suggest listening to the podcast Running From Cops. (Variety, Deadline)

Did we miss the toppling of a racist monument? Please share below in comments.

← 'We Are in the End-Game of Early-Stage Authoritarianism,' Says Stacey Abrams | All The 'Harry Potter' Stars Who've Denounced J.K. Rowling's Transphobic Tirades, From Daniel Radcliffe And Emma Watson To Percy Weasley →