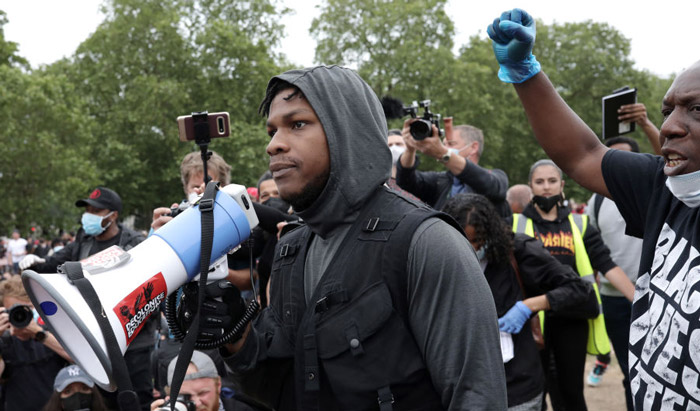 John Boyega is well aware that Star Wars fans want him to smile and be funny like his character, Finn. He knows some are disturbed when he follows in this Resistance hero’s footsteps by speaking out and fighting back against a fascist system that abuses the marginalized. Last week, Boyega faced bizarre blowback for tweeting, “I really f*cking hate racists.” This week, he’s joined the Black Lives Matter protest in London, where he delivered an impassioned speech that included the acknowledgment, “I don’t know if I’m going to have a career after this, but f*ck that.”

With a megaphone in his hand and voice streaked with pain, Boyega spoke to his fellow protesters. Snippets of his speech were captured on video and shared on Twitter.

“how painful it is to be reminded everyday that your race means nothing….” Thank you @JohnBoyega #BlackLivesMattter pic.twitter.com/OcQ1YtU4Mx

In the above video, Boyega says:

This message is specifically for Black men: Black men, we need to take care of our Black women. We need to take care of them. They are ours. They are our hearts. They are our future. We cannot demonize our own. We are the pillars of the family. Imagine this: A nation that is set up with individual families that are thriving. That are healthy. That communicate. That raise their children in love, have a better rate at becoming better human beings. That’s what we need to create. Black men, it starts with you…We have to be better. Do you understand? I’m speaking to you from my heart. Look, I don’t know if I’m going to have a career after this, but f*ck that.”

Tens of thousands marched in London to protest the police killing of #GeorgeFloyd and racism in the UK: "This has been years in the coming. Years and years and years of white supremacy."

They were joined by actor John Boyega: "We're fighting for our rights." pic.twitter.com/I5gmBIbXj7

“We are a physical representation of our support for George Floyd…for Sandra Bland…for Trayvon Martin… for Stephen Lawrence… I don’t know if I’m going to have a career after this, but f*** that” - John Boyega at London’s #BlackLivesMattter march 👑 https://t.co/pxf0lf3KFq pic.twitter.com/ckHVswRz6h

White privilege is Mel Gibson getting Oscar nominations after decades of racism, sexism, and anti-semitism when John Boyega says his career is at risk for telling cops to stop killing black people.

I will be buying extra movie tix for whatever John Boyega is. https://t.co/3zqveW89fM

white celebs do the bare minimum and get praised. john boyega speaks out and spreads awareness but is seen as unprofessional and hateful and now feels uncertain as to whether he’ll still have a career. don’t tell me white privilege isn’t real. pic.twitter.com/d6l0u9FSf9

Imagine having your hero storyline cut in Star Wars just to become one in real life… https://t.co/uOXActq47r

Star Wars taught me that at the end of the day, there are terrible people in this world, and a resistance is built within the people, people that stand up and want to bring change. John Boyega has embodied this, and Im so glad he’s using his voice and platform. https://t.co/IZNrsn1V0K

Outside parliament @JohnBoyega tells everyone to take a knee and says black people “I love you” pic.twitter.com/2egDZwmBzE

This is no time to mince words: John Boyega is a hero. He is at the Hyde Park march using his famous face to draw attention to the cause of Black Lives Matter. He is using his platform to dismantle white supremacy. And he’s doing all of this in full awareness that it could cost him his career, his safety, and his life.

← Dale Murphy Speaks Out about Black Lives Matter, Reaffirms That He Remains the Best | Black Artists Share Their Skills With #DrawingWhileBlack →