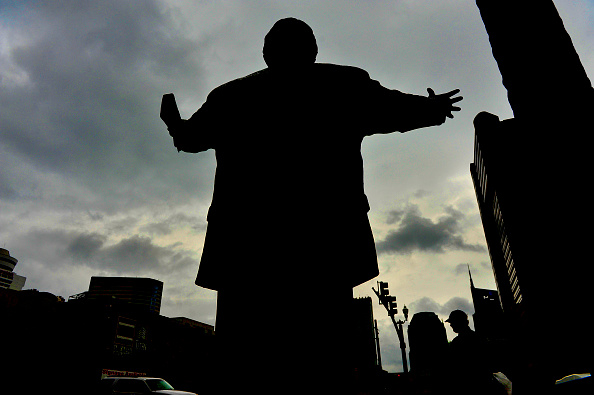 Southern Baptists to the Catholic Church: Hold My Beer

I spent a fair amount of time in Southern Baptist churches growing up, and — as opposed to the Methodist in my town, where the Democrats and families with working mothers attended — they had the stifling energy of an authoritarian father trying to ensure his daughter waited until marriage to have sex. There were church camps, overnights at skating rinks where they screened End Times films on the wall, and services where terrified newcomers were scared into getting saved every single week only to be admonished for allowing themselves to be saved more than once because to do so is to doubt the power of Jesus. These men would knock on your door with their soft voices and brochures and lure you into their churches with promises of a better, more prosperous future with a community of friends only to emotionally overpower you once you entered their doors. They do not like congregants who refuse to submit or express independent thought. I recall attending a Southern Baptist church with a girlfriend when I was about 15, and I was specifically held after service, and — in front of my girlfriend and her parents — was asked not to return again because I wore an earring. “What does your father think of your earring, son?” the pastor asked me.

“He liked it so much he got his own ears pierced,” I told him.
It is within that environment — where good old boys in cheap suits preach abstinence and casually drop the N-word into small talk — that sexual abuse has, unsurprisingly, flourished. The Catholic Church is well known for its sexual abuse scandals, but that’s only because they got caught. The Southern Baptists, until this week, had managed to keep a lid on their problems. The Catholics swept abuse under the rug and quietly reassigned their clergymen. The Southern Baptists, on the other hand, not only kept their church leaders on, they refused to report or even acknowledge sexual abuse committed by their own ministers and smeared the reputations of those who attempted to report sexual assaults. They suggested sexual abuse survivors were “opportunistic,” had a “hidden agenda of lawsuits,” and were “professional victims.” They likened reporting sexual abuse to the work of the devil: “This whole thing should be seen for what it is. It is a satanic scheme to completely distract us from evangelism. It is not the gospel. It is not even a part of the gospel. It is a misdirection play.”

Take, for instance, a Florida pastor who was accused by 44 women — 44! — of inappropriate sexual conduct, but “in almost every case, they were reportedly shamed for [reporting the abuse] and left feeling they were not believed.” When one woman tried to report that the pastor had attempted to rape her, she was told not to do so because “it would be embarrassing for her.” That pastor, during one stretch, left four churches in four years because of allegations, but the Southern Baptists never stopped hiring him. He was finally convicted in 2007 and sentenced to three years in prison for having lewd contact with teenage girls.

A scathing report released this week listed hundreds of pastors and others associated with the church who have been accused of sexual abuse since 2000. It was not easy to collect the data, however, because church leaders did not record reports of abuse. The hundreds of names collected came from one guy in the Southern Baptist executive committee who basically kept a file of newspaper clippings in a drawer anytime an employee associated with the Southern Baptist church was accused of sexual abuse. That means that the list of hundreds of men accused only comes from those who actually filed police reports that were recorded in newspapers after church leaders dismissed their complaints and shamed them.

In recent years, rather than focusing their efforts to rid the church of abusers, Southern Baptist church leaders have been more preoccupied with culture wars, sham fights over critical race theory, as well as trying to stop women from gaining positions of leadership within the church. When Beth Moore, a prominent white evangelical woman, gave a Mother’s Day sermon attacking “the sexism and misogyny that is rampant” among Southern Baptists, she was chased out of the denomination.

“If you still refuse to believe facts stacked Himalayan high before your eyes and insist the independent group hired to conduct the investigation is part of a (liberal!) human conspiracy or demonic attack, you’re not just deceived,” Beth Moore said in a tweet (per the NYTimes). “You are part of the deception.”

When one Southern Baptist Church ordained three women, church leaders discussed booting the church from the denomination, and actually expelled two other churches for allowing gay couples to be members.

If you look at the roles of MAGA voters, you’ll find that they are dominated by Southern Baptist, which itself is controlled by men who shame their own congregants for reporting sexual abuse, who suggests rape victims are opportunistic conspirators of the devil. These men — in many cases — do not believe what these women and children are accusing them of are acts of abuse. These men believe they are entitled to rape and molest, and that the victims should be grateful for the attention. I know these men. I grew up with these men. These men beat their daughters if they find out they are kissing a boy (sometimes in front of the boy), because they insist on asserting control and ownership over women, but also because they think that all men are as gross and violative as they are.

Sexual abuse is not a small problem in Southern Baptist churches. It is flourishing because of a misogynistic culture where men don’t just look the other way, they protect each other. If my children were in any way involved with the SBC, I would get them the hell away as quickly as possible. I literally would not trust a church official, pastor, youth minister, or even a member of one of these churches to be left alone in the same room with a loved one for more than 20 seconds.

They know as much about God as I know about anime.