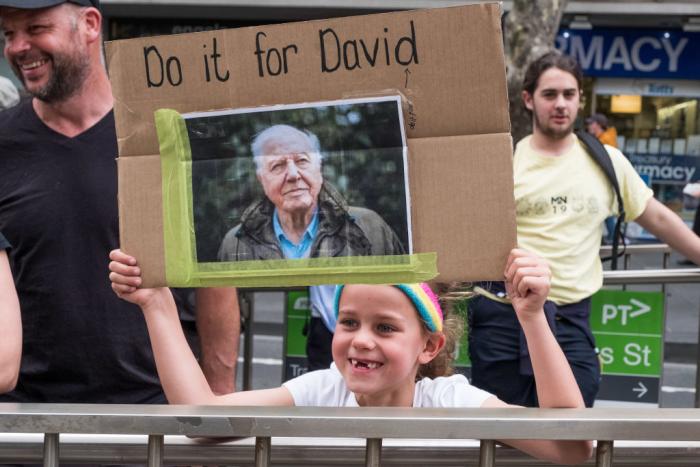 David Attenborough is in a good few ways a bit of a hero of mine. The 95-year old broadcaster and natural historian has been an icon and champion of conservationanism and the natural world for twice as long as I’ve been alive. His BBC series—including such groundbreaking classics like The Blue Planet and Planet Earth—remain some of the most astonishing documents ever made: Technically unparalleled, beautiful, heartfelt accounts of the teeming, precious life that exists on our lonely pixel in space.

It’s one of the saddest thoughts imaginable then to contemplate the studies coming out recently describing how in just half of David Attenborough’s lifetime humans have managed to wipe 70% of that life from existence. According to a report in CBS:

Nearly 21,000 monitored populations of mammals, fish, birds, reptiles and amphibians, encompassing almost 4,400 species around the world, have declined an average of 68% between 1970 and 2016, according to the World Wildlife Fund’s Living Planet Report 2020. Species in Latin America and the Caribbean, as well as global freshwater habitats, were disproportionately impacted, declining, on average, 94% and 84%, respectively.

It’s easy, when pondering statistics like this, to lapse into reflexive, Agent Smith-y thinking. A ‘Humanity is a virus’ sort of thing. I know I’ve done so a number of times. When contemplating how much of an extinction level event we as a species appear to be, it’s easy to blame that nebulous notion of ‘humanity’ and to give up and leave it at that. But to assume that ‘humanity’ is the problem—that this level of death and destruction is something deeply inherent and immutable in our very nature—is to fall into a cynical, misanthropic trap. A trap that perpetuates the problem.

It isn’t ‘humanity’ that’s the problem. It’s our methods.

People aren’t the problem. Capitalism is.

It’s capitalism that has made the world as it is, bringing it to catastrophic climate chaos and countless species to extinction. ‘People’ have existed in innumerable different states and societal organisations throughout history. Yet it’s only in the last few hundred years—a period marked by rampant, fossil-fuel driven capitalism—that we have seen the scale of extinction and artificially made climate change that we are starting to reckon with now. The vast majority of carbon emissions contributing to that climate change have been released in our very recent history. As a report in the European Institute for Environmental Policy states:

Not only has humanity not succeed in reducing emissions following warnings on climate change in the late 1980s and 90s, but the emissions have also grown substantially, and we have now emitted as much since 1990 as in all of history before that time.

This has not been inevitable. This is the result of choices made, of subjugating all other needs and sacrificing everything upon the altar of short-term profits and endless, fossil-fuel driven growth. Endless growth on a planet with finite resources. Capitalism is ruthless, not smart. It’s also only one possible avenue. One we have been frogmarched down, with the vast majority of the world getting no say whatsoever in whether or not this is the path they would choose. Often, when they have tried to choose others, they have been destroyed. But there are others. As the late, great David Graeber used to say: ‘The ultimate hidden truth of the world is that it is something we make, and could just as easily make differently’. This depressing state of affairs is not set in stone. It wasn’t fated to be. We have the chance, still, to make a different future. But to do that, we have to know what we are up against.

This distinction, between blaming humanity, and blaming capitalism, is crucial. If we don’t diagnose the problem properly, we have no hope of curing it. Which is why it’s so disappointing to see people like David Attenborough—who has an immensely huge platform, and who is so often seen as a prime authority on the subject—centring things like ‘overpopulation’ when discussing the damage our economic system has done to the world.

Attenborough has been busy lately. He joined Instagram—becoming the account to reach one million followers the quickest, beating out the previous record holder, Jennifer Aniston. His reasoning behind joining the popular social media network is sound, at least on the surface of it. Attenborough states that climate change is a problem of communication, that more people need to desperately hear how bad the situation has become, and that a platform with as much reach as Instagram can be a powerful tool for that communication. He’s not wrong. But he’s not exactly correct either. Climate change, now impacting more and more people in the countries most responsible for it in the first place, is less and less of a fringe issue in the Global North (the Global South and Indigenous communities have been steps ahead for a long time, both in tragedy and awareness). We are still not taking it nearly as seriously as we should of course—neither legislatively, nor in terms of popular discourse—but the problem is arguably now much less evenly distributed between those two poles than it used to be. Now, people are demanding change, salvation; it’s the capitalist politicians still mostly refusing to deliver it that are the problem. That shouldn’t be a surprise. They serve different masters. Vested interests that profit immensely from the continued destruction of our ecosphere.

The crux of the matter is not humanity, it’s our systems. The strange evolutionary determinism that is implied by the former framing has to be discarded. Similarly, it’s not about how many of us there are, it’s how resources are allocated. Overpopulation is by itself not an issue. Not when a tiny proportion of the world’s population is responsible for the majority of the problems we face. Not when the richest 1% cause double the CO2 emissions of the bottom 50%. Not when just 100 companies are responsible for 71% of global emissions. These are systemic problems endemic to one very specific, historically aberrant economic system that require structural analysis and correct diagnosis. Which is why it is a shame when a figure as important and iconic as David Attenborough defaults to the lazy tactic of blaming ‘overpopulation’ for the planet’s woes. As well as joining Instagram, David Attenborough also has a new Netflix film out. Called A Life On Our Planet. Attenborough has decried ‘overpopulation’ before. It would perhaps be too much to expect the BBC to invite on their show someone calling for the urgent overthrowing of capitalism, but, well, a boy can dream.

"We've overrun the planet"
In an exclusive interview with #BBCBreakfast Sir David Attenborough reveals his grave concerns for the planet and where his hope for the future lies.
Watch it in full here: https://t.co/Z35e8ggaW3 pic.twitter.com/GUrzSxV2Qj

‘Overpopulation’ is dangerous, racist rhetoric. There is more than enough room on this planet, more than enough resources to feed everyone and to give everyone a good life. Those profiting from the exploitative economic model we live under will make every effort to make sure we forget that simple fact. In the coming decades, as climate chaos worsens further and further and people suffer and look for someone to blame, politicians in thrall to capital will use any tactic to distract attention away from the real culprit. ‘Overpopulation’ will gain greater traction and we’ll see it deployed alongside ‘immigration’ more and more often. Ecofascism will rise and while we may well see a mildly greener form of capitalism arise in our societies, we will end up with an even crueler power imbalance between the Global North and South. We’re already seeing the first bubbles of this, as white nationalists like Tucker Carlson—sensing the overwhelming hunger for change—marry economically progressive rhetoric to racist and xenophobic talking points. It’s only going to get worse. A new age of imperialism will be born on a heat-ravaged planet roiling with endless storms. The displaced millions from the Global South will bear the brunt of it. The powers of the Global North will go to war to ensure they can keep their empires running on fumes for a precious few years more.

Lest that sounds like hyperbole, sections of the ruling elite in those empires are already planning along those lines. A recent, truly remarakable report in Vice describes how the UK armed forces are already planning for a mid-century temperature rise that is in line with the worst case scenarios currently modeled by climate scientists. As Vice reports:

A potential 3.5°C temperature rise is well beyond the 1.5°C level considered by scientists as an upper ‘safe limit’ to avoid tipping planetary ecosystems into a dangerous climate era.

What’s notable is that the report to the MOD [Ministry of Defense] doesn’t treat this as merely one potential worst-case scenario out of many, for the purpose of contingency planning. Instead, it puts forward the scenario unequivocally as an outcome which the UK government should simply expect to happen, rather than attempt to avoid.

This level of temperature rise, it acknowledges, would usher in a new era of catastrophes consisting of more frequent “extreme weather events, such as droughts, heatwaves, floods, heavy rainfall, storms or hurricanes”; the disappearance of Arctic sea ice “before 2050”; “rising sea levels in coastal regions and severe droughts in the Sub-Saharan region” which could “trigger population displacement”; as well as “natural resource shortages and competition as drinking water becomes scarcer and crop yields lower, or as crops are destroyed by extreme weather.”

The MOD report doesn’t go into how a 3.5 degree rise—cataclysmic as it already is—may well be a better case scenario than the one we are heading for. 3.5—again, already totally catastrophic—is based on the assumption that the countries signed up to the Paris agreement meet its meagre goals. Recent news reports have made it clear where we are right now: Nobody is meeting any of the goals. We are heading for worse.

The Vice report goes on:

There could be broad ideological reasons behind the consistent reluctance of world governments to step up their climate commitments.

It so happens that the 3.5°C scenario has been prominently articulated not by the IPCC, but by the Dynamic Integrated Climate-Economy (DICE) model developed by economist William Nordhaus of Yale University. In this scenario, the world reaches 3.5°C by around 2100 and then continues to warm up to 4°C through the next century.

This model, which has significantly influenced government thinking around climate mitigation, sees 3.5°C as a desirable goal for international climate policy. But rather than aiming for climate safety, its goal is “economic efficiency.”

The idea is that it is better to ensure GDP growth now even if this locks-in dangerous warming, because this will mean that future generations will have far more wealth and therefore greater capacity to respond to climate catastrophe.

It’s at this point that I have to say I’m putting down the keyboard, and I am gonna go find a patch of grass to stare at numbly, slack-jawed with despair.

But hey, at least Attenborough himself might actually be starting to say the right stuff now, as in a recent interview he seemed to address the politics and power dynamics of climate change, rather than pointing the finger at ‘overpopulation’ and giving ammunition to all the wrong people while distracting from the real issue:

There must now be cooperation between nations, and cooperation requires giving up things, as well as gaining them. Internationalism must be our approach. There must be greater equality between what nations take from the natural world. The wealthier nations, such as those in western Europe, have taken a lot and the time, perhaps, has now come to give.

Baby steps. I wish they were enough.