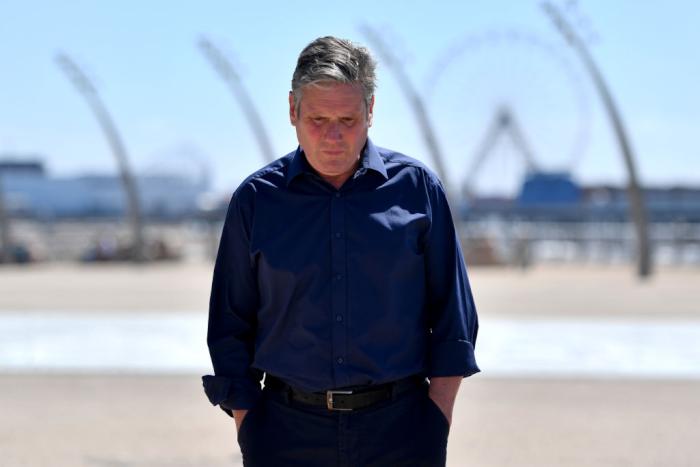 The Labour MP and father of the NHS, Nye Bevan, once said: ‘No attempt at ethical or social seduction can eradicate from my heart a deep burning hatred for the Tory party. So far as I am concerned they are lower than vermin.’ I share that sentiment. But I also extend it, with probably even more vitriol, to the right wing of the Labour Party itself. To Tony Blair’s New Labour and its acolytes. And most definitely to the current Labour leader, Sir Keir Starmer.

People who have been around here for a few years may have noticed that I’ve stopped covering UK politics pretty much entirely. That’s because there’s nothing left to cover. It’s a scorched wasteland of scurrying cockroaches and cannibalistic rats. There’s nothing to be gained from reporting on this. It’d be like setting up a 24-hour feed of an irradiated landfill.

Like so many millions in the UK, especially of my generation, I spent the vast majority of my youth and adult life divorced from politics in this country. It was an assembly line of identikit PR men and bankers all preaching the same neoliberal imperialist dogma, selling off the country’s assets and privatising everything they could get their hands on while setting corporations free to run amok and wreak havoc on workers’ rights and the environment. War, crisis after crisis, and a looming apocalypse. That was our backdrop.

And then came the strangest blip in living memory. In longer than living memory. A politician who was the real deal. A deeply principled, lifelong campaigner for justice and peace who, through a series of incredible circumstances became leader of the Labour party. It all seems like some strange fever dream now, the Jeremy Corbyn years. A half-glimpsed phantom in the fog, dissipated by a breeze. For nearly five years we had hope. Real hope that things could get better. That electoral politics could achieve actual, systemic change. I wish I could conjure up the words to do justice to the atmosphere of those days. I’ve never felt anything like it. For the first time in my life, I became a member of a political party.

In the general election of 2017, a Labour party led by Jeremy Corbyn came within two thousand votes of potentially winning the election. This was a remarkable achievement, considering that it was done in the face of the most relentless propaganda campaign in modern history, and the vicious opposition of the party’s right wing who actively worked to sabotage the party’s chances. It’s easy to forget the scale of what happened. The UK establishment threw everything it had at Corbyn and the millions of people he empowered—everything—and despite all that he almost walked through the doors of 10 Downing Street. No matter how long I live or how senile I get, I’ll never forget the energy of those days, and especially of that summer. It was, in the oft-quoted words of Hunter S. Thompson: ‘The kind of peak that never comes again.’

There was madness in any direction, at any hour. You could strike sparks anywhere. There was a fantastic universal sense that whatever we were doing was right, that we were winning…

And that, I think, was the handle — that sense of inevitable victory over the forces of Old and Evil. Not in any mean or military sense; we didn’t need that. Our energy would simply PREVAIL. There was no point in fighting — on our side or theirs. We had all the momentum; we were riding the crest of a high and beautiful wave…

So now, less than five years later, you can go up on a steep hill in Las Vegas and look West, and with the right kind of eyes you can almost see the high water mark — that place where the wave finally broke, and rolled back.

Sadly, the wave in the UK rolled back too. The forces of reaction and of the status quo proved too strong. At the same time, Corbyn and his team did not act as they should have (and as they were nevertheless accused of doing by the press): Ruthlessly remaking the party in their image. Instead, they gave olive branch after olive branch, naively trusting some of the most wretched and treacherous people this country has ever produced. Between the 2017 election and the 2019 one, the media had an extra few years to run its propaganda campaign and the Labour right took every opportunity to undermine the party leadership. Defeat was nigh-on inevitable. The leadership of Jeremy Corbyn had brought hope to millions of people not just in the UK but around the world too, but following this defeat he stepped down as head of the party.

The snakes wasted no time in regaining control of the party and doing precisely what Corbyn was accused of doing and arguably should have done: Mercilessly purging the party of ideological opponents and stacking its apparatus with allies. Now, less than two years since Corbyn’s departure, it is almost as if he had never been there. Its new leader, Sir Keir Starmer, has suspended him, expelled and proscribed thousands of members—tens of thousands of whom have also left of their own volition, and the party is now pursuing the same neoliberal antidemocratic agenda that—one small, strange, wonderful blip aside—has been its hallmark for all of my adult life. The Labour party now as it exists under Keir Starmer has only one purpose: to crush the left and to drive whatever influence it might’ve gained during the Corbyn years out of the party. It’s not a vehicle for challenging the Tories or providing an alternative. It’s agenda is to reassure the wealthy donors who controlled Labour before Corbyn’s leadership swelled party’s membership and its coffers through small donations that it is open for corrupt business yet again, and now free from the brief poison burst of democracy. I’ve spent a good few paragraphs here, rambling my way to a statement that I could’ve just put at the start and left it at that I suppose, but sh*t, sometimes you just need a good venting. Nevertheless, in conclusion: F**k the Labour Party. I’m gonna go do something more productive with my day.

Here’s Ken Loach with a video for Double Down News with more to assist me because I can’t commit any more energy to this nonsense today: