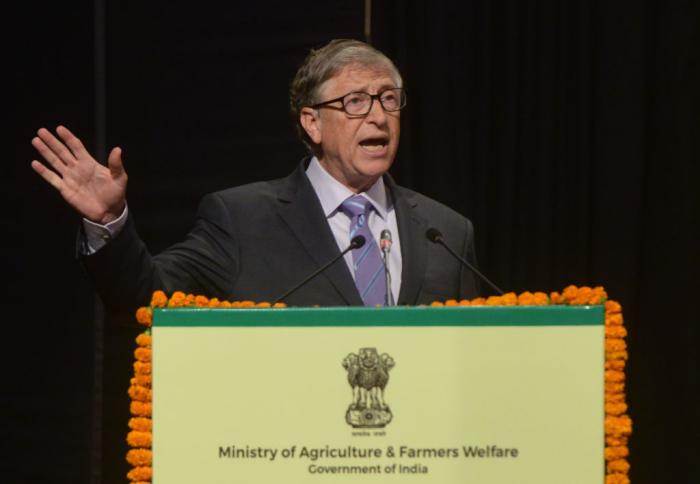 One of the most tiring rhetorical dances to watch play out in the public sphere in the past decade and more has been the reconfiguring of Bill Gates from a predatory, monopolistic capitalist into saintly ‘good billionaire’ philanthropist. It’s not quite as nauseating as the periodic legs of the never-ending George W. Bush image rehabilitation tour (Thanks to overwhelming demand, more tickets now available! Come see the auteur behind such hits as the Iraq War, the Patriot Act, ICE, and many more, now touring brand new material! Catch him on the sofas of beloved gurning empire apologists like Jimmy Kimmel this Spring!) but it’s up there.

Bill Gates originally made his name with Microsoft as a celebrity billionaire tech nerd and businessman. Later he became mired in controversy over his company’s monopolistic business practices and the anti-trust case that was brought against it as a result in 2001. That may have tarnished his image for a while but it had a neglibile effect on his power and wealth. For the 22 year span between 1995 and 2017 Bill Gates was the richest person in the world for 18 of those years.

For a while now, however, it’s arguably not Microsoft that Bill Gates is most often associated with, but instead the Bill & Melinda Gates Foundation, the world’s largest private charitable entity, which holds up to $46.8 billion in assets. As with any such foundation that very publically makes it its business to be concerned with the plight of the world’s poor and ‘underprivileged’, the Bill & Melinda Gates Foundation’s real raison d’etre is the projection of undemocratic power and public relations management on behalf of that power. A billionaire perpetuating his influence while pretending to be doing it for the good of the world, in other words. The exploiter trying his hardest to make sure the word ‘underprivileged’ keeps on being used instead of the more accurate term, ‘exploited’.

Bill Gates likely couldn’t be happier that his name is now mostly associated with various acts of philanthropy rather than the predatory capitalism that made him who he is. That means that his foundation is working as he wants it to. To many, philanthropy is seen as having a net positive effect on the world. Even those people who accept that the wealth that gives individuals like Gates the power to become a philanthropist in the first place is inextricably tied to unethical business practices and the exploitation of a global working class sometimes like to highlight the examples of public good that philanthropists do with their various projects. The danger with philanthropy however is that it is no substitute for proper, accountable, democratically decided public policy, and is in fact a danger just as often, or more so, as it might be a boon. As Andrew Bowman writes in a piece in the New Internationalist on the Bill & Melinda Gates Foundation:

A study in the Lancet in 2009 showed only 1.4 per cent of the Foundation’s grants between 1998 and 2007 went to public-sector organizations, while of the 659 NGOs receiving grants, only 37 were headquartered in low- or middle-income countries.

In many Majority World countries, state healthcare was eviscerated by structural adjustment programmes enforced by the World Bank and International Monetary Fund, and by the continued loss of skilled personnel in globalized labour markets. Now, says McCoy, NGOs have stepped into the breach but have also created a ‘fragmented “patchwork quilt” landscape of healthcare provision’ which governments struggle to co-ordinate and align to national priorities.

This has potentially serious implications. Polly Clayden of i-Base, an HIV information and activist organization, says, ‘some of the research Gates funds is ill-advised, but if you had HIV and somebody was paying for your antiretroviral drugs in a trial, perhaps you wouldn’t really care [who provided it]. What you really want is for those people to be treated.’

‘However,’ she warns, ‘the problem is sustainability. Donors are quite capricious: AIDS might be the priority one year, and then suddenly they will go on to something else.’

Research by Devi Sridhar at Oxford University warns that philanthropic interventions are ‘radically skewing public health programmes towards issues of the greatest concern to wealthy donors’. ‘Issues,’ she writes, ‘which are not necessarily top priority for people in the recipient country.’

The situation is replicated at an international level. With the rise of health partnerships, the proportion of global health funding channelled through the UN fell from 32 to 14 per cent between 1990 and 2008, placing major limits on the possibility for poorer nations to influence international health policy. Although the Gates Foundation provides considerable support to the WHO, the money is, as with much of the WHO’s funding nowadays, earmarked for preconceived projects rather than the decisions of the World Health Assembly.

For critics, then, the way ‘venture philanthropy’ focuses on measurable impact may obscure the less tangible, but equally important, goals of democracy and empowerment. As the philanthropy analyst Michael Edwards has asked: ‘Would philanthrocapitalism have helped fund the civil rights movement in the US? I hope so, but it wasn’t “data driven”, it didn’t operate through competition, it couldn’t generate much revenue, and it didn’t measure its impact in terms of the numbers of people who were served each day. Yet it changed the world forever.’

As if the fact that a small number of wealthy individuals like Bill Gates already get to have veto power over some of the most important policy decisions in the world wasn’t bad enough, the past year or so has shown, in stark relief, the true devastating effect that billionaire lobbyists have on the planet—and especially on those in the Global South. Earlier this month Alexander Zaitchik wrote an incendiary piece in the New Republic that detailed the lengths that Bill Gates, through his foundation, has gone to to protect medicine patents while governments representing billions of the most vulnerable people around the world beseech the wealthy Global North nations to relax patents and save millions upon millions of lives that will otherwise be lost to COVID-19. Zaitchik writes:

Few have observed Bill Gates’s devotion to monopoly medicine more closely than James Love, founder and director of Knowledge Ecology International, a Washington, D.C.-based group that studies the broad nexus of federal policy, the pharmaceutical industry, and intellectual property. Love entered the world of global public health policy around the same time Gates did, and for two decades has watched him scale its heights while reinforcing the system responsible for the very problems he claims to be trying to solve. The through-line for Gates has been his unwavering commitment to drug companies’ right to exclusive control over medical science and the markets for its products.

“Things could have gone either way,” says Love, “but Gates wanted exclusive rights maintained. He acted fast to stop the push for sharing the knowledge needed to make the products—the know-how, the data, the cell lines, the tech transfer, the transparency that is critically important in a dozen ways. The pooling approach represented by C-TAP included all of that. Instead of backing those early discussions, he raced ahead and signaled support for business-as-usual on intellectual property by announcing the ACT-Accelerator in March.”

The picture couldn’t be more dramatic. The grim, remorseless logic of market supremacy continues to be dictated and reinforced by foul agents like Gates, no matter the scale of emergency calling for a different approach nor the consequences for humanity. Zaitchik continues in the New Republic piece:

As of this writing in early April, fewer than 600 million vaccine doses have been administered around the world; three-quarters of those in just 10 mostly high-income countries. Close to 130 countries containing 2.5 billion people have yet to administer a single dose. The timeline for supplying poor and middle-income countries with enough vaccines to achieve herd immunity, meanwhile, has been pushed into 2024. These numbers represent more than the “catastrophic moral failure” the director general of the WHO warned about this January. It is a stark reminder than any policy that obstructs or inhibits vaccine production risks being self-defeating for the rich countries defending exclusive rights and gobbling up the lion’s share of available vaccine supplies. The truth repeated so often throughout the pandemic—no one is safe until everyone is safe—remains in force.

This easily anticipated market failure—together with the C-TAP’s failure to launch—led developing countries to open a new front against intellectual property barriers in the World Trade Organization. Since October, the WTO’s Trade-Related Aspects of Intellectual Property Rights Council has been center ring in a dramatic north-south standoff over rights to control vaccine knowledge, technology, and markets. More than 100 low- and middle-income countries support a call by India and South Africa to waive certain provisions related to Covid-19 intellectual property for the duration of the pandemic. Although Gates and his organization do not have an official position on the debate roiling the WTO, Gates and his deputies have left little doubt about their opposition to the waiver proposal. Just as he did following the rollout of the WHO’s C-TAP, Gates has chosen to stand with the drug companies and their government patrons.

Gates can’t seem to help himself, with Salon reporting the billionaire doubling down on his position against relaxing patents. The reactions on social media were predictable and appropriate:

How the fuck did Bill Gates get to be the one to decide https://t.co/1YcvHiZe4W

Bill Gates could pay the entire $25 billion needed to vaccinate low- and middle-income countries globally and he would still be $31.5 billion richer than he was before the pandemic. Greed is a terrible addiction that must be cured by taxing the rich and ending drug monopolies. https://t.co/hbCElXeEmA

Bill Gates dedicated his entire professional life to ruthlessly consolidating his monopoly, why on earth would he share vaccines lol https://t.co/eAvfX6HctO

Some weird Bill Gates/microchip vaccine conspiracy theories out there, but imo they only serve to provide cover for stuff like this, the very real ways in which he's restricted vaccine access to the Global South https://t.co/mF4QcOgTje

Bill Gates, 65 years old, doesn't give a shit about saving human lives, will still be revered by half the world for being a "generous" billionaire https://t.co/BRsLzFoCE8

Bill Gates is a eugenicist and ecofascist. This is very on brand for him and he's using his wealth to kill people in the Global South https://t.co/gcP3Km7dII

the remarkable thing about Bill Gates is that he’s a huge piece of shit but was perhaps the first uber wealthy person of his generation to figure out how to successfully rebrand as a good, philanthropic billionaire https://t.co/T6ikvHKj8S

whenever Bill Gates gives one of this softball interviews to a fawning reporter (and he only gives softball interviews) his critics are always held up as anti vaxx rightwing cranks, he’s never asked to engage with principled left criticisms, it’s a brilliant way to limit debate

If you've ever wondered whether Bill Gates actually cares about the "global poor", here is your answer. https://t.co/USnsDGsHK6

"Bill Gates is one of the good billionaires"

We done pretending now? Cause this is so ugly. https://t.co/A3n9S6xyib

bill gates opposes making the vaccine formula public for the same reason he opposes higher taxes on corporations and billionaires like himself: he wants to ensure power remains concentrated in his hands, even if it means countless will die. economist thomas piketty explains: pic.twitter.com/j1KlzibtDZ

F**k Bill Gates. He’s a walking, talking, sweater-wearing avatar of capitalism’s avarice and expansionary nature, swanning around the globe dictating the direction of policy that will influence how billions live or die. Colonialism never went away. Nobody voted for him. He represents the supremacy of capital over democracy and he, just like every other single billionaire, should be taxed into oblivion. But no, instead these parasites are held up as heroes and geniuses, and brought on to host Saturday Night Live, and I’m so fu*king exhausted of living in a culture in that tries to force-feed us respect for these egregious symbols of a fundamentally poison system.


← Youn Yuh-jung Is Not Impressed with Brad Pitt | What Will it Take for the Age of the Hollywood Tyrant to End? →