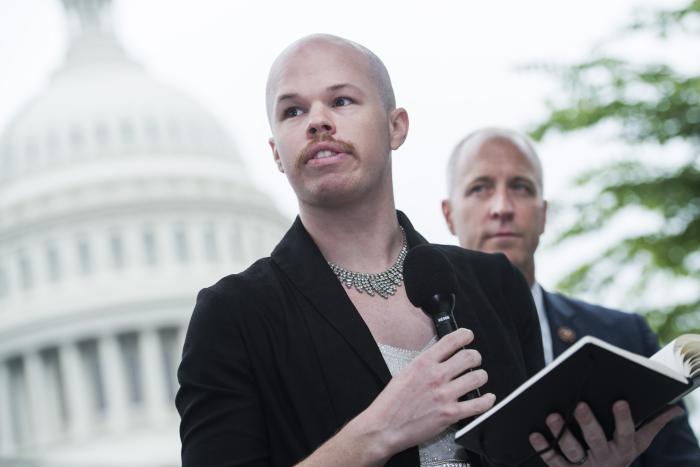 Sam Brinton Is the Future (And American Conservatism the Tragic Past)

(Trigger Warning, and like, I can’t stress this enough, there will be gross, horrific examples of hatred towards non-binary people or enbyphobia, transphobia, homophobia, basically all hatred based phobias. Also, if you love the sciences, you’re gonna be pissed)

Sam Brinton is (deep breath while checking their Linkedin): A Dual-Bachelor of Science in Mechanical Engineering with Nuclear Engineering Option and in Vocal Music Performance from the Kansas State University; a Dual Master of Science in Nuclear Engineering and in Technology and Policy from the Massachusetts Institute of Technology. Has been an intern or research assistant in places such as the Argonne National Laboratory, Dow Chemical, Global Zero, and the MIT itself, while later working as a consultant or fellow in places such as the Third Way think tank, the Bipartisan Policy Center and working in Director positions at Deep Isolation, a start-up focused on nuclear waste management. They have been an advisor on nuclear waste management to Obama and the former guy’s administration (whether the former guy’s goons listened to him is irrelevant) and was recently selected by the Biden administration as (copies straight from their Twitter) Deputy Assistant Secretary of Spent Fuel and Waste Disposition in the Office of Nuclear Energy for the Department of Energy. Also, they are around 33-34, because that’s just what I needed, more overachieving mid-Millennials making me look like a bum.

Sam Brinton is also a prominent LGTBIQ+ activist, working at The Trevor Project in the Department of Advocacy and Government Affairs, spearheading campaigns to ban conversion therapy after surviving of those still-legal torture camps. As you might guess, they identify as non-binary, proudly, openly, and always donning killer stilettos. In their private life, apparently, Brinton is into role-playing kinks, which were disseminated for the entire world to see (thanks DailyFail!)… and which apparently they were never ashamed of, as Brinton published some of these photos in their social media. It appears these and their pro-kink statements on social-media are no longer public, probably to avoid any more hoopla. They are also happily married, by the way.

So what we have here is a brilliant young person who has accomplished more in 33 years of life than the entirety of the Congressional GOP, including their academic achievements. Just the fact that they were able to go from being raised by Southern Baptist preachers to become an MIT graduate in Nuclear Engineering is an all-American story of overcoming adversity. They will, in turn, have a key position in addressing a key issue in fighting the climate crisis: What to do with nuclear waste,since we’re gonna need nuclear power to wipe out fossil fuels. And they did all that while turning the pain they survived into direct, policy-focused activism that will change the lives of millions of young queer people.

So as you might imagine, the US fascists and GOPers LOST. THEIR. GOD. DAMNED. MINDS.

Up next, there is a collection of all the vitriol Brinton has been getting on Twitter. I didn’t need to search deep; they are the overwhelming majority of posts that come up when your search social media. Once again, I need to trigger warn you because these are some of the most heinous, virulent, ignorantly vile things you could say about any queer person, and the only reason I’m posting them is for you to report and block these accounts. 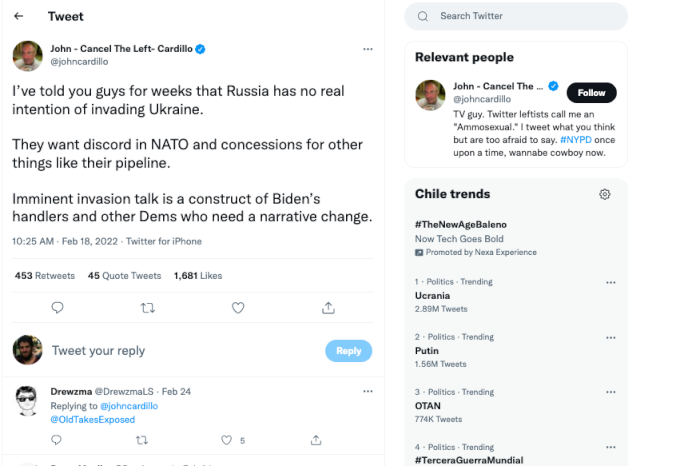 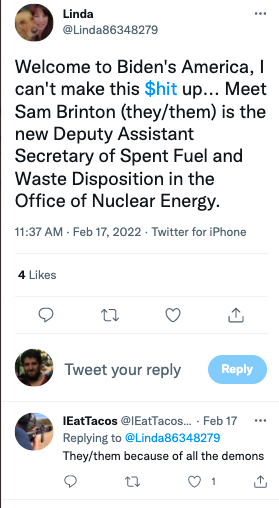 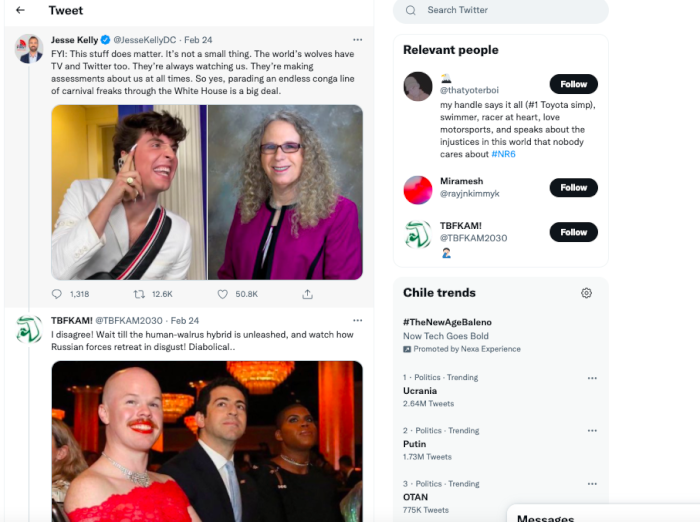 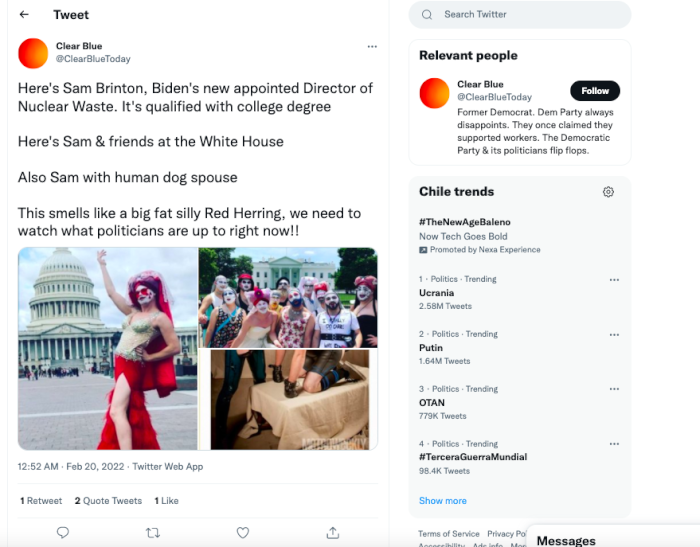 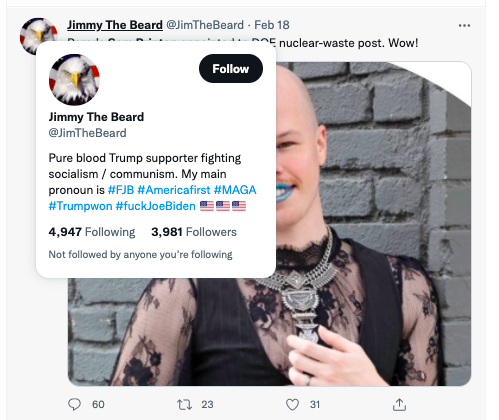 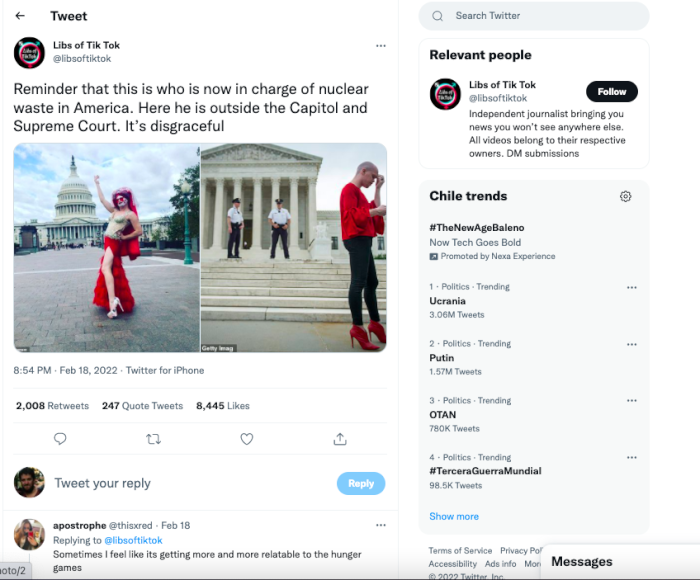 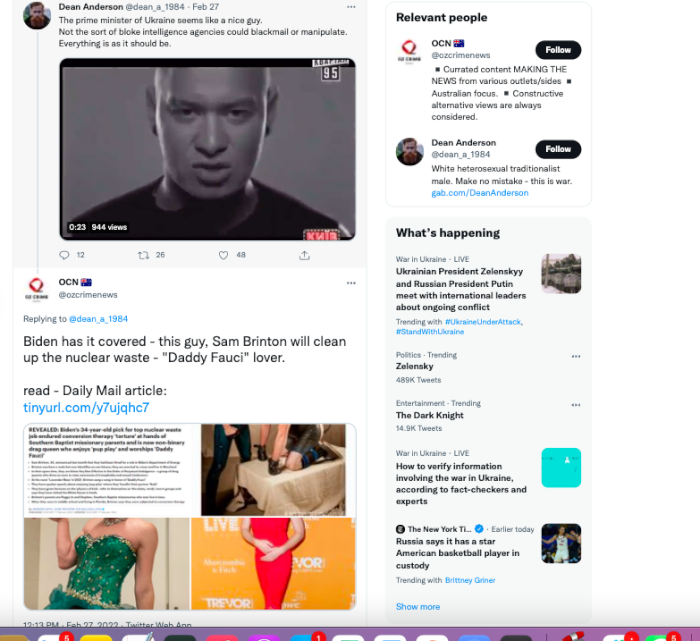 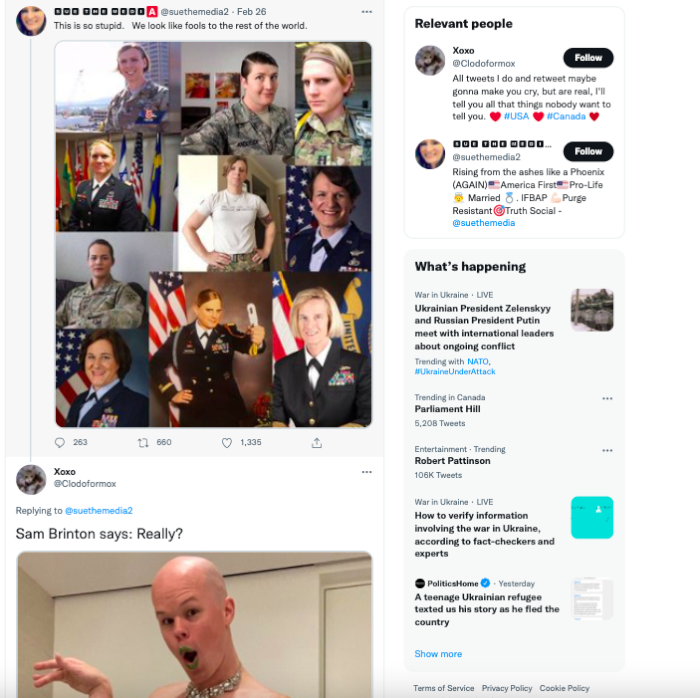 That’s the tip of the iceberg, not to mention attacks against Brinton from more “institutional” sources, not just loser bigots with an iPhone: 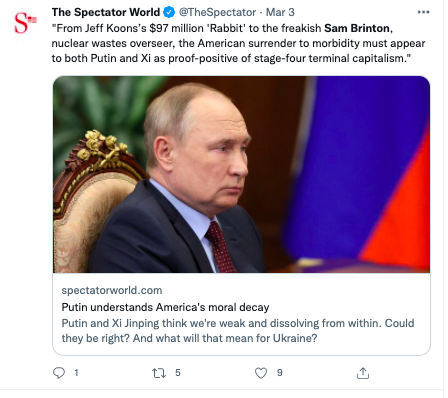 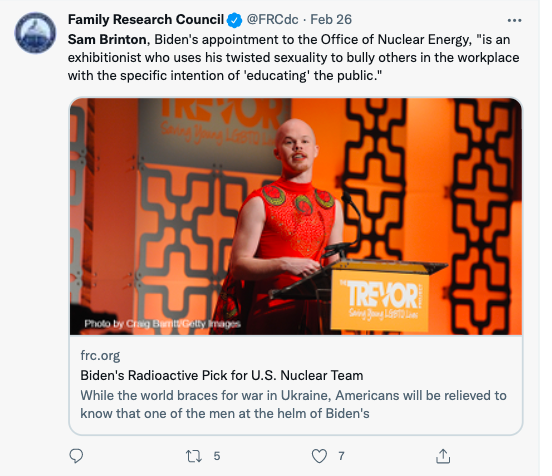 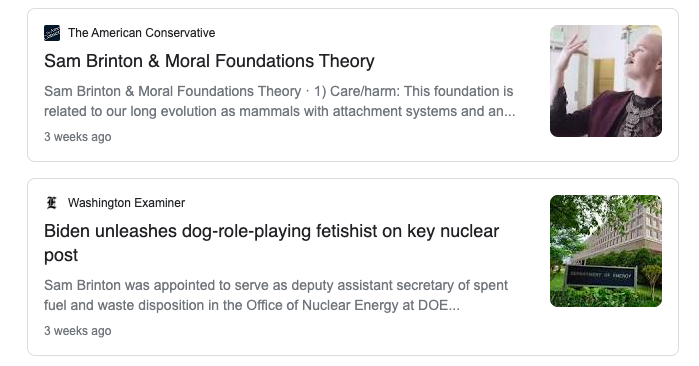 There’s even a bullshit campaign calling Brinton a fraudster and questioning their experience in the conversion camps. I checked it out, and it turns out it’s being promoted by some sort of ex-gay activist group. It’s sad. 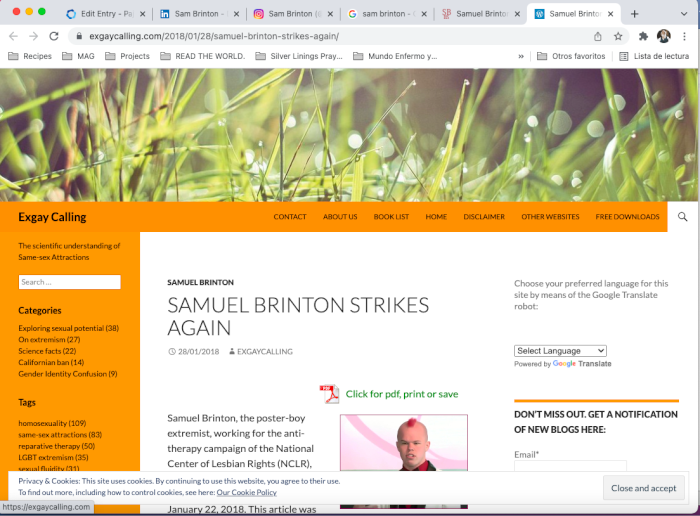 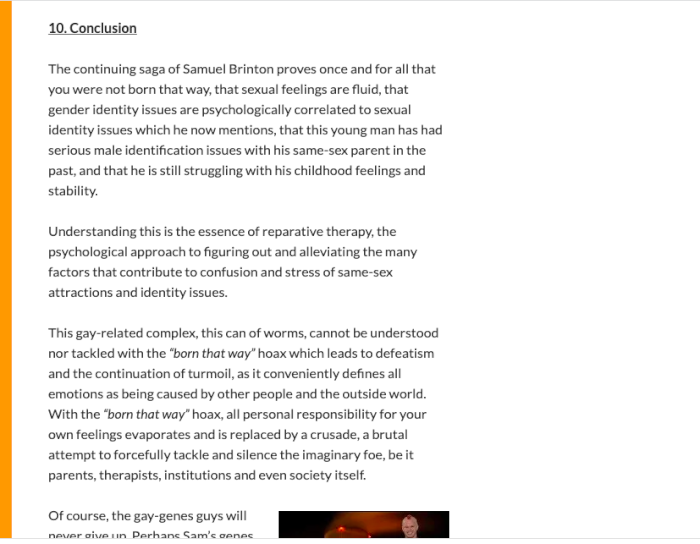 I also found some dumbass articles by one of those gay conservatives, decrying that he represented a sad “dorkification” of gay culture, instead of … I don’t know, does he want all queer people to be insufferable contrarians like him? He also makes me sad, because I lived surrounded by conservative homophobes. I know and he probably knows that no matter how many articles he writes against cancel culture and devil-advocating against his own interests, that glint of gut-level disgust in their eyes will never go away.

Reading all of this, I came to realize what cis-hetero privilege really meant. Sam Brinton probably has a skin made of layered titanium and ceramic compounds plus reactive armor in the form of brutal comebacks against everything they have ever been called. An LGTBIQ+ kid raised in San Francisco probably has a thicker skin than mine. The fact that I could read that vomit and only think of recording them, reporting them, and blocking them instead of feeling it was chipping away at my soul — that’s cishet privilege.

Luckily, people did show up for Sam Brinton, with some wonderful dunks on their harassers: 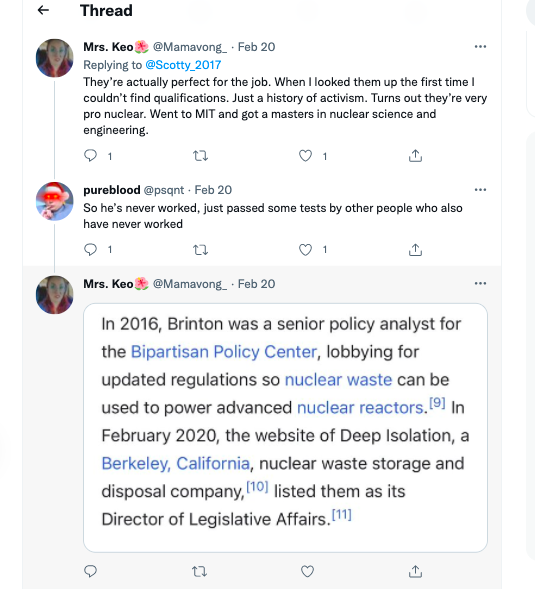 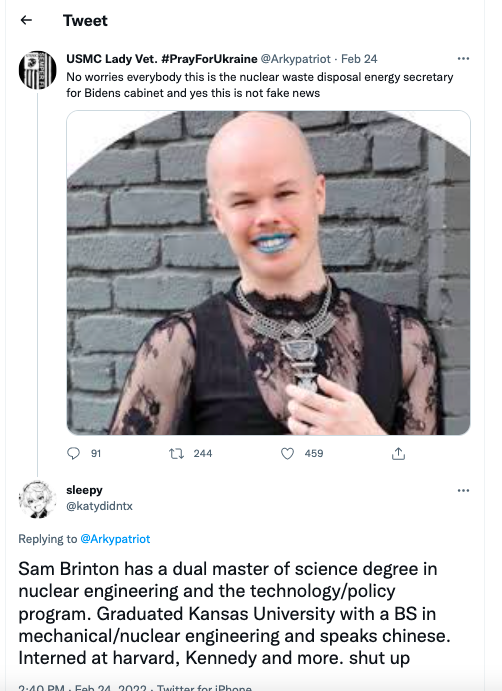 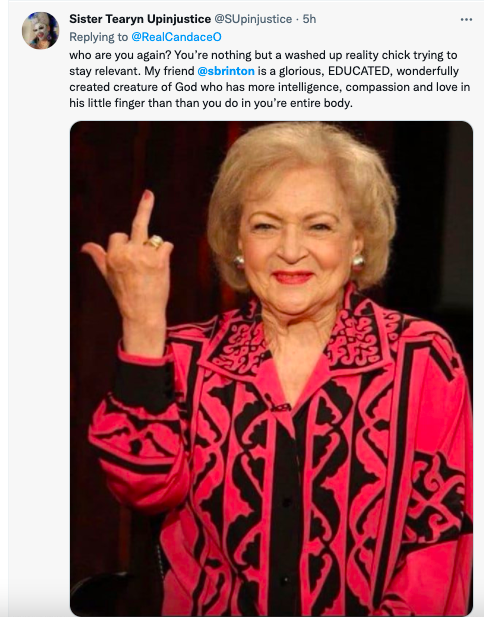 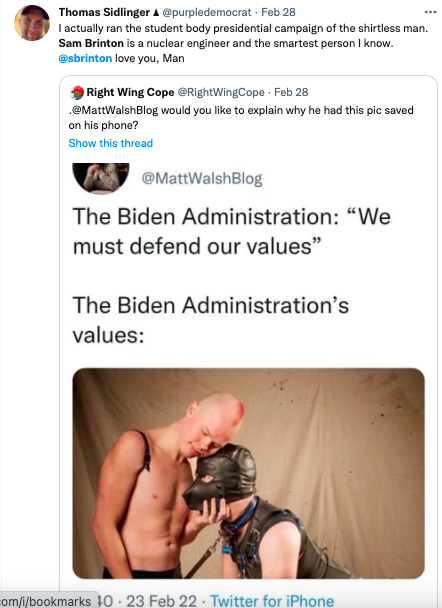 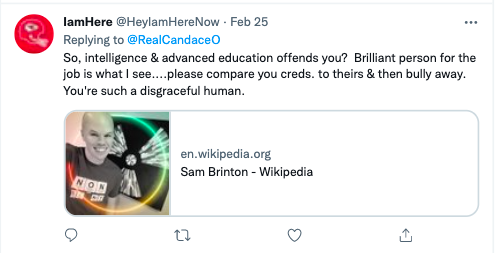 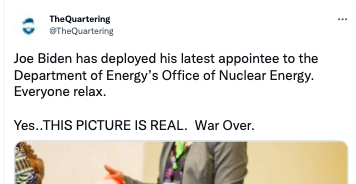 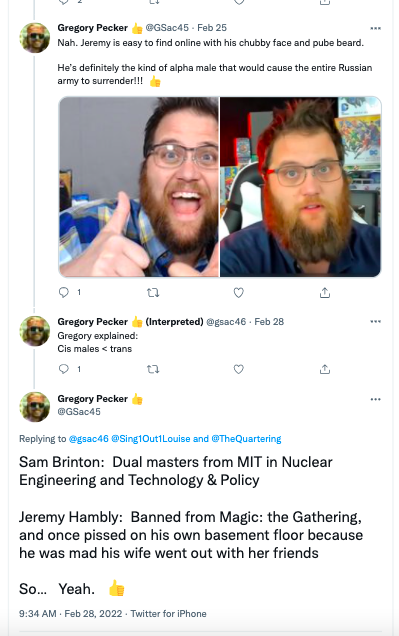 There are many things about these mouthbreathers; reactions to Sam Brinton that make me wanna go full Old-Testament. There are moments when your rage against immorality meets at an intersection with your rage against anti-intellectualism, the denial of nigh-unquestionable pieces of evidence. When both columns of rage meet, they join, they fire up each other’s (justified) anger, and they press on, but they feel at a lack of words to explain and counteract something so horrifically wrong.

But this time it’s much more simple: Sam Brinton is a Graduate from the M-I-T. The M-I-T. The place that makes that other Uni in Boston feel inadequate, and with good reason. Now, as with any top-tier Uni, some of the worst people in the world passed through there, but mostly through the Management School and it’s not like their problem is their qualifications to do evil shit. But still, being a scientist and an expert in science policy from MIT in one of the coolest and most complex areas of knowledge should be argument enough to shut any naysayer’s big, dumb mouths. Seriously, I’m wary of blowing steam up the ass of certain Universities, but MIT might count as an exception because it’s the f**king MIT. That’s it, that should zip the debate.

That’s the tragedy of US conservatism, from overpaid assholes at the Federalist Society to the maskless Karen calling the police on a cookout. But it’s a tragedy without catharsis and where I cannot find a damn thread of empathy to hold on to.

This is what a culture war does to a MF. This is what chartered, segregated education does to a MF. This is what white evangelicalism does to a MF. This is what the United States’ contempt for intellectualism does to a MF. But all these people are not victims, these people are just the resentful beams of a building that’s about to collapse (MFers never thought of insulating against the South’s humidity and rising tides). They are what the very few net-positives of modernity are leaving behind. It’s their fault. Because I believe in personal responsibility too, but a particular kind: Intellectual personal responsibility, to train your curiosity to explore beyond the failures of your system. The one that makes you discover that a) Nuclear technologies are something the vast majority of humanity knows jackshit about and we should recognize the experts and b) Gender is a wonderfully complicated dimension. Learn to change your mind. What all these people are doing, instead, is letting their inner high school bullies take over because they have nothing left to offer to the world, and Sam Brinton has everything.

Perhaps a fellow like Sam Brinton is … too much for their narrow little minds to process. Like a mental allergy, Brinton is someone whose very existence questions every single one of their most deeply held systems of belief, so they react with a virulent rejection of a body too foreign for their binary minds. They can choke on their past.

And yes, Sam Brinton is what you might call a character. Unusual? Weird? Yes, but that word hasn’t been an insult in a long-ass time. Winston Rowntree made sure to bury the negative connotations years ago, and turned it into a point of pride. Weird in the most creative, unimpeachable, world-enriching way. Because Sam Brinton is the future.

Sam Brinton is what we Lib-Leftists want with all our tricky, tiring, unending, and needed conversation on identity. This is what we want with pronouns. Geniuses that can also be whatever on earth they are, that can literally wear a fluid identity without it affecting their careers and their intellectual education. Sam Brinton embodies the best parts of the future. Sam Brinton is the very definition of Cyberpunk. People like Sam Brinton are the kind that will make at least one part of the Future less bleak, whether it is by having whole generations of gender-fluid nuclear engineers, repairing the engines of asteroid-hopping spaceships, The Expanse-style, or by counteracting the climate crisis with tiny, highly efficient reactors that repurpose the fuel of nukes. Or both. Or just being genderqueer without having to explain jackshit to anyone and without having to be the most accomplished person in the world.

I too did a disservice to Sam Brinton. Sort of. For the banner picture, I chose a more “institutional” shot of them, with the Capitol Dome in the background and standing beside a congressman. But they are also the kind of people that can go receive an award by Playboy rocking this. They are all part of them. 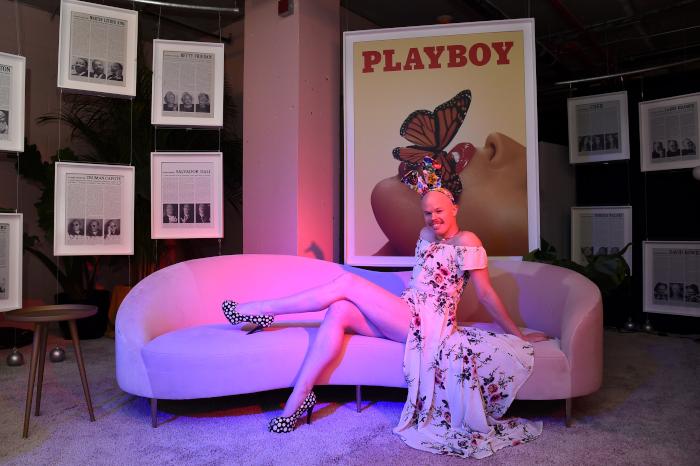 (Online support for them has been far from enough. So, if you have the energy, time to love-bomb their timeline)

Alberto Cox would still like to offer those horrid people a very heteronormative debate with his fists, to which he gave very cringey names. You ain’t scaring anyone, Alberto