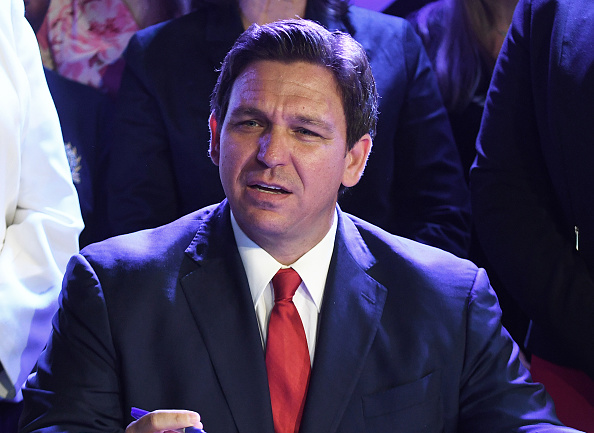 Ron DeSantis Cut Off His Own Nose to Spite the Libs

The “Don’t Say Gay” bill may have given Florida governor Ron DeSantis a short-term win in whatever culture war he’s fighting, but the long-term consequences for the potential 2024 Presidential candidate could be disastrous. Before the bill was even passed, it appeared that it was going to be a major trigger for lawsuits and not the kind that conservatives would want in Florida. That’s because, to avoid triggering equal rights protections, the “Don’t Say Gay” bill had to remain vague, meaning that it doesn’t allow discussion of sexual orientation of any kind from grades K-3 and that such instruction “be age or developmentally appropriate” for higher grades. The fear here among conservatives is that, by talking about relationships between same-sex couples, younger kids will be “groomed” into queer kids, which is not a thing.

However, aside from creating moral panic among K-3 grade teachers who may quit for fear of saying the wrong thing, it also gives those who oppose the spirit of the law plenty of ammunition to bring their own lawsuits should an instructor discuss his or her straight marriage. From an op-ed in The Washington Post:

So what’s to stop parents from bringing actions against school boards from the other side — against references to heterosexuality or cisgenderism that can be deemed “instruction” in “sexual orientation or gender identity”?

In other words, there’s nothing stopping a parent from suing a school district for indoctrinating their children into a straight lifestyle. Teachers are going to have to keep their heterosexual relationships out of their mouths, lest they risk lawsuits from opponents of the law. It’s going to be a sh*t show, and lawyers defending the bill will be hamstrung by the language because they can’t argue, “We only meant to ban discussion of queer relationships!” because doing so would trigger equal protections laws and the courts would have to strike the law from the books.

Meanwhile, after Disney objected to the “Don’t Say Gay Bill” under pressure from both the public and its own employees, Ron DeSantis decided to punish Disney by … giving it a massive tax break?! By taking away the special tax district, Reedy Creek, for Disney, DeSantis has managed to punish Floridians. That’s because, in the special district, Disney is responsible for its own sewer system, public works, fire department, zoning, etc., which it pays for itself by taxing itself $163 million a year tax to pay for its own projects.

By taking away the special district for Disney, the company will have to go through regular procedures to, for instance, build a new facility on the property or fix a road. That might be a pain in the ass. On the other hand, the two counties in which Disney is located — Orange and Osceola — will now have to provide sewer system, public works, fire department, zoning, etc. for Disney, meaning the state and local governments will not only have to pick up the bill for those services, but also assume Reedy Creek’s $1 billion in debt.

How will it do that? By raising taxes. A lot. Property taxes in Orange and Osceola County will have to be raised by as much as 25 percent starting next year, and if those counties don’t want to raise taxes, they will have to cut their budgets to pay for the expense.

In other words, Florida taxpayers will now have to foot the bill for every queer New Yorker who comes to Disney and uses a Disney toilet or drives over a Disney road because Republicans in Florida are as dumb as they are bigoted, and in order to pay for it, they may have to fire a lot of teachers and leave a lot of potholes unfilled.