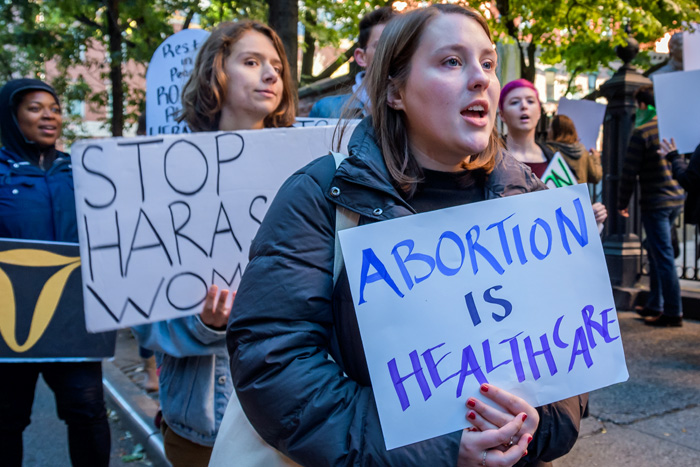 In a move that should surprise absolutely no one, Republicans are attempting to exploit the current pandemic by making baldly transparent moves to shut down Planned Parenthood under the guise of concern-trolling over medical supplies or just flat out labeling women’s health as “non-essential” or “elective.” Adorable, right? And I say this move shouldn’t come as any sort of surprise because this is exactly what Republicans do all of the time. Anyone who wants to say that the Democrats are just as bad, or both parties are the same, should be shipped off to Moron Island where they can jam out to Bernie livestreams to their heart’s content. (Sorry, I needed that.)

Like most people who spend way too much time online, I was aware of the attacks on Planned Parenthood that are happening in Ohio and Texas, but as I perused the news in PA this morning, I learned that this attack is rearing its dick-shaped head in the Keystone State thanks to the party that is literally saying out loud that grandparents should sacrifice themselves for the sake of Wall Street. A party that is decidedly not the Democrats, and yes, I might do this the whole column. We all have our own versions of self-care.

The Pennsylvania Family Institute is asking Wolf and the Pennsylvania Department of Health to order the abortion provider to stop performing elective abortions and all other services during the public health crisis.

“This is unacceptable,” Michael Geer, president of the Pennsylvania Family Institute said. “Planned Parenthood is now 100 (percent) abortion - willing to put further strain on our health system and risk increasing the spread of this virus so they can still profit from their main service revenue stream of elective abortions.”

Right off the bat, that’s just an outright lie. Abortions only make up three percent of Planned Parenthood’s services, which is an easily verifiable fact, so that argument won’t gain much traction. What could stir shit up is Helen Lovejoy-type pearl-clutching over the scarcity of medical supplies.

“Planned Parenthood has the nerve right now to ask for donations of masks, surgical hats and hand sanitizer - scarce resources needed by Pennsylvania hospitals treating patients with COVID-19 - so that they can be used to perform elective abortions,” said Emily Kreps, a legal representative for the group.

As detailed and highly recommended reads in The Cut and Buzzfeed cover more thoroughly than my online caterwauling, setting aside the fact that Planned Parenthood provides a plethora of very essential health services for women — like, oh I dunno, birth control while we’re all trapped inside — many of the abortions are performed through pharmaceuticals, but even with the ones that require a minor procedure, the window to get them done safely is very short. And if that window is missed, you didn’t just solve your bullshit problem by stopping an abortion. You’ve now put an even larger strain on healthcare services by forcing women into full-term pregnancies during a pandemic. You know what requires a whole lot more medical supplies and manpower than an abortion? Child birth, you forced birth f*cks.

Will this move get anywhere in PA, a state controlled by a Democratic governor? Probably not. But Republicans did manage to get gun dealers onto the list of life-sustaining businesses because what’s more pro-life than arming yourself to murder your fellow man if he covets your stockpile of Lucky Charms? So, you know, anything’s possible.

← Eerie Current Similarities And Trivia Facts About The Movie 'Contagion' | Why Yes, Bree and Roger are the Most Boring Couple in 'Outlander' →