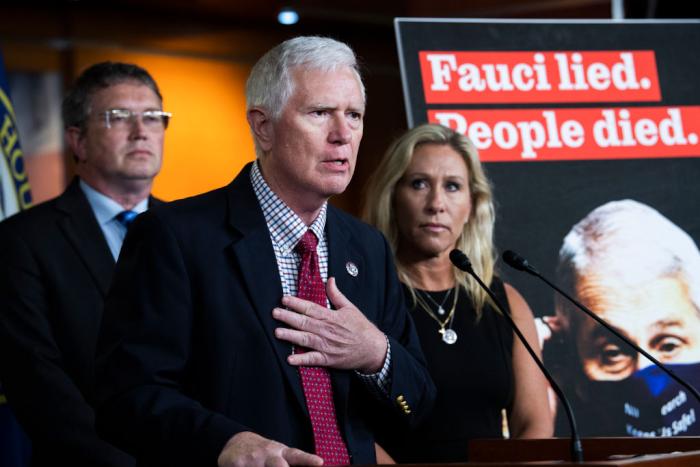 Mo Brooks may be the dumbest man in Alabama. That’s saying something, given the state’s educational ranking. How else to describe a politician who helps incite treason, inadvertently gives up his immunity to civil suits related to the insurrection, and then admits to wearing body armor to a “peaceful” rally? It’s fair to say Mo Brooks’ own mouth is his worst enemy, a far greater threat than any number of imagined Antifa super-soldiers.

This all started when Mo gave a rousing, and some would say treasonous, speech at the “Save America Rally” on January 6. In it, he repeatedly called for the Trump supporters present to “start taking down names and kicking ass.” He noted their ancestors gave their “blood, their sweat, their tears, their fortunes, and sometimes their lives” to defend America, and asked if they were willing to do the same. After a day of Republican incitement, the crowd decided to do as instructed and attacked the Capitol building, leading to damage, injuries, and multiple dead. Representative Eric Swalwell tried to hold him accountable with a civil suit since there was no chance of Brooks facing criminal charges. Mo Brooks then hid from the court summons like an absentee father ducking child support payments, forcing Rep. Swalwell to hire a PI to try and track him down. Eventually, a process server tracked down Brooks’ wife at their home and served her with the papers.

.@EricSwalwell Well, Swalwell FINALLY did his job, served complaint (on my WIFE).

HORRIBLE Swalwell’s team committed a CRIME by unlawfully sneaking INTO MY HOUSE & accosting my wife!

Brooks refused to respond to the lawsuit until Swalwell filed a court motion asking for a default judgment against the representative.

It gets better. Brooks then claimed he only spoke at the rally because the White House asked him to, and requested the Justice Department quash the lawsuit because, according to him, it was in the scope of his duties as a Congressional Representative to incite a riot. Unfortunately for Mo, he claimed his “kicking ass” statements were political speech meant to inspire followers into voting for MAGA candidates in the 2022 and 2024 elections. The Justice Department rejected his request, not because the claim is a blatant lie but because if Mo’s telling the truth, his speech becomes a campaign event. Campaigning is very definitely not covered in the scope of a Member’s duties. This means not only will Brooks not be protected by the DOJ but his affidavit becomes evidence against him. It was submitted to the court under penalty of perjury, so he can’t later claim it was inaccurate. Then, then Mo decided it was a good idea to tell a Slate reporter, Jim Newell, he wore body armor to the rally.

“That’s why I was wearing that nice little windbreaker,” he told me with a grin. “To cover up the body armor.”

Brooks claimed he was warned the previous Monday of potential violence at the rally. Why? “… Financial losses suffered because of the government’s reaction to COVID-19,” “the belief that there was significant voter fraud and election theft activity,” or “a great love and respect for President Trump.” He also threw in a line about “militant anarchists,” because if there’s one thing a Republican hates more than a poor woman getting an abortion it’s accepting responsibility. But it sounds like he knew there was a significant chance of mob violence at the rally. Even so, he chose to incite the crowd on Trump’s behalf.

Rep. Swalwell’s civil suit is probably the only way Brooks or other mob leaders will ever face consequences for their role in the failed insurrection. Even so, the odds are stacked against him. But that may change if Mo Brooks keeps letting his mouth run away from him.