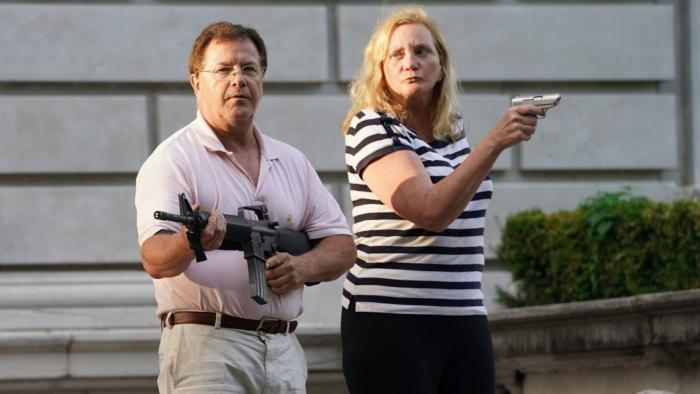 I felt no surprise when I heard that Mark McCloskey, the St. Louis lawyer lionized by the GOP for waving his assault rifle at peaceful protestors like a used car salesman prepping for an evening’s Purge, was running for US Senate. His particular brand of self-aggrandizing martyrdom is a perfect fit for the 2021 Republican party. McCloskey, whose only other claim to fame is suing everyone in sight, announced his run on Tucker Carlson’s show before posting his first campaign ad on Twitter.

An angry mob marched to destroy my home and kill my family, I took a stand to defend them.

I am a proven fighter against the mob

When the mob comes to destroy our home, our state, our nation— I’ll defend it

I will NEVER BACK DOWN

Where to begin. First, he’s obviously very fond of the word “mob.” Also, the victim complex remains strong here. A peaceful crowd marched by his house and he’s convinced they were there to murder himself and his wife Patricia, who probably pronounces the J in “mojito.” McCloskey told Carlson that “God came knocking on my door last summer disguised as an angry mob, and it really did wake me up,” which sounds a lot like God was on the side of the protestors, so Mark pointed an assault rifle at Him. I can’t blame God, if true. Given a choice between people protesting the abuse of police powers or a lawsuit-happy lawyer whose greatest struggle in life is a stained polo shirt, I know who I’d pick. I’ll give him credit, though; his lack of experience in public service combined with delusions of victimhood and lack of empathy makes him the perfect candidate.

He faces a full field in the Republican primary. Former Governor Eric Greitens is also running. Greitens was last seen defending himself against charges of taking nude photos of his mistress without her permission as well as campaign finance improprieties. Missouri AG Eric Schmitt is in the mix as well, but appears too normal by current Republican standards to get very far. He’s only sued China over Covid-19, as well as St. Louis county for its mask requirements. I don’t know how he expects to win over voters without a serious sexual or financial scandal in his recent past. Perhaps he can wave a firearm at a local Girl Scout troop to drum up interest.