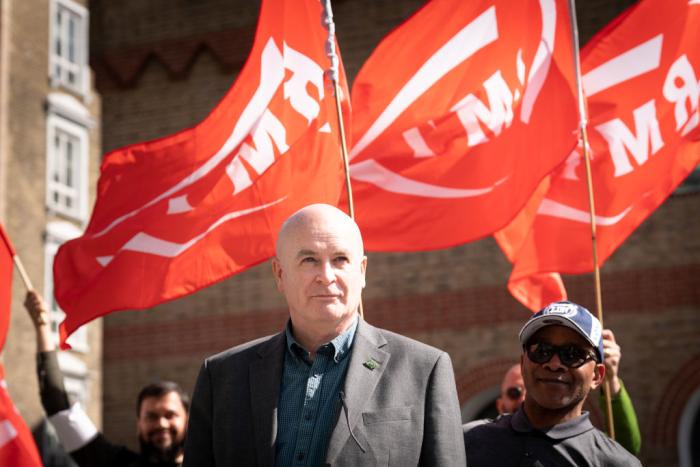 Now This, THIS Is How You Deal With the Media!

Britain is a failed state. If it wasn’t for the racist and empire-enabling connotations of that term meaning it is only ever focused in one direction, it would be used to describe the country all the time. An incredibly wealthy nation in which the vast majority are subjected to ever-worsening living standards while the wealthy few at the top continue to grow their wealth at record rates. A revolving door between industry and Parliament that, alongside cosy family-and-friends relationships between the two spheres, ensures that there is a continuous stream of wealth transferal from the the already-impoverished public to the already-rich elites. Regressive taxes and tax haven enabling policies and structures, collapsing wages, soaring food bank usage, hostile immigration environments, child poverty, industrial scale arms dealing, imperial wars of ‘post-colonial’ aggression, racist insitutions, deliberately underfunded and eviscerated public services—you could go on and on. The instutional purpose of the UK has moved fully away from any notion of looking after its citizens. All it knows now how to do is enable the mass looting of the public sphere so as to enrich the few and make it easier for a bunch of world-destroying corporations to carry on doing exactly that.

Party politics doesn’t make a difference as both sides subscribe to the same fundamental worldview (with a few notable, aberrant exceptions among the ranks) of the neoliberal supremacy of ‘the market’, and the one institution that is in theory meant to hold the powerful to account—the media—remains woefully, almost comically, uninterested in doing so. The UK mainstream capitalist media is a textbook example of the ways corporate media serves to protect the powers that be and the structures that uphold them. Before I stepped away from political coverage for my own peace of mind, I went off on the UK media, time and time again—so I won’t do so here as I’d just be repeating myself. Instead what I’ll do is share one of the exceedingly rare bright and hopeful moments that sometimes happens in that media.

It’s been happening the past few days, courtesy of one Mick Lynch, the Secretary-General of the National Union of Rail, Maritime and Transport Workers (RMT). The RMT are currently holding the biggest strike in several decades, in protest against a government and a corporate system that wants to worsen their working conditions and add them to the long list of people whose pay and life quality is flushed down the toilet by British capitalism. The UK has one of the most union-hostile legal environments in Europe. It’s one of the worst violators of union rights on the continent, and the number of unions left that have the strength to fight for its members is a fraction of what it once was. The RMT, however, is one of those unions, and so naturally the corporate media—stenographer of the powerful and playground for insipid poshos—has been hellbent on trying to turn the public against the RMT, barely covering the actual reasons for the strike while instead framing issues in ways straight out of the Tory playbook. It’s not working: 54% of the public currently support the strike. Mick Lynch will be a part of that, as his media appearances have been a masterclass in how to deal with a corrupt and complicit machine. Here’s a selection of Twitter coverage to brighten your day like it did mine.

the head of the railway workers union who are currently on strike showing how you deal with media class hackspic.twitter.com/0a1Ika03We

Mick Lynch of the @RMTunion: "Are you saying that workers should passively accept the reduction in wages, the stripping out of terms and conditions, extended hours and precarious employment?". Well said, and solidarity to everyone on strike today. #KayBurley pic.twitter.com/PorbTgzoyH

He nailed it. This “cost of living crisis” is manufactured. Killing the masses with bills, but slowly stripping away their rights.

It’s time for Brits to wake up and see what’s happening around them. Instead of hating on striking workers, join them? pic.twitter.com/SiPgYUctFq

This is more economically literate than the chancellor of the exchequer (or anyone likely to replace him.)

There’s a lot of talent & smart people in this country - but they’re locked out by a self-perpetuating 2 party machine which serve elite interests. pic.twitter.com/xUFD1SBTGU

a Baroness angrily saying "don't tell me I'm not working class" is the perfect distillation of the UK's political culture https://t.co/9HKLCgkAV0

Between them, Mick Lynch and Sharon Graham make me feel like we might not be totally fucked

Mick Lynch is genuinely a hero. He’s achieved more for working people in 12 hours of media appearances than Starmer has managed in over two years

Currently binge watching videos of Mick Lynch basically telling everyone in the media to F**K OFF & now I feel like I can take on the world!

Labour could do with some lessons in calling out bull & challenging from him pic.twitter.com/vd7CYWkovX

Mick Lynch schooling presenters on the media rounds is absolutely class. Such a refreshing sight compared to the political game playing and spin we are constantly subjected to.

The way Mick Lynch has dealt so effortlessly with the media, unscripted and soundbite-free, because the truth doesn't need a focus group, has really shown up the 'opposition leader' for the vacuous non-entity that he is.

did Mick Lynch just drop a solid gold clip on every news channel he went on this morning? I swear I’ve seen about half a dozen different ones on my timeline today https://t.co/DhLp3W1JUS

When a spokesperson for working class people and their interests isn’t obsessed with being ‘nice’ and doesn’t take Britain’s bizarro broadcast media especially seriously.

Lot to learn there! pic.twitter.com/99fDBDeeW1

Somewhere up high today, Bob Crow is looking down very proudly at Mick Lynch and the whole @RMTunion

Dismantling every single political or media melt that comes in front of them.

Victory to the RMT!

Mick Lynch and @UniteSharon represent the very best of the Labour movement. Bold, principled and assertive. What a breath of fresh air. In stark contrast to the weathercocks who are willing to throw working-class communities under the bus to protect their own careers.

Mick Lynch and Eddie Dempsey appearances in the media lately are shining examples why there needs to be more working class voices being heard. https://t.co/MCqAi92HyZ

Mick Lynch, who left school at 16, is a far better media performer than all the glib Etonians who were prepared for television appearances throughout their childhoods.

He has a superb way of ridiculing faux hysteria.

The sort of person you want on your side.

Mick Lynch's ability to break the rules of news communications styles must not be merely seen as neat innovation in comms or framings. he can speak like that because he is speaking on behalf of a democratic group and has years of training within a militant union

I have seen a few tweets on this ridiculous website that amount to "I was angry with the RMT until I saw Mick Lynch and now I support the strikes". THAT'S what cutting through the dogshit can do. https://t.co/TrDQM5xU5h

What’s remarkable about the Mick Lynch coverage is just how rarely we hear straightforward, working-class lefty union people in mainstream debate. Our media is dominated by a privately educated professional pundit class, their MP and banker chums, and it’s all the poorer for it.

All it takes is one guy not to care if he gets invited back on TV and suddenly all the 'ferocious reporters' and 'hotly contested political debates' just look exactly as they really are: a load of people chatting meaningless shit

I don’t think strikers or RMT could have asked for a better ambassador pic.twitter.com/H9DMiXT9lZ

Watching Mick Lynch toreador his way through news presenters yesterday, I kept thinking how so much TV news is low-information and low-value. This piece is excellent on how it fails us on industrial disputes https://t.co/eZXD5qjtow

Victory to the RMT! Unconditional support for all strikes.


← British Airways Lost Aisling Bea's Luggage, So She Went To Jimmy Kimmel In A Bathrobe | Review: Irish Horror Gains Another Unsettling Classic with 'You Are Not My Mother' →