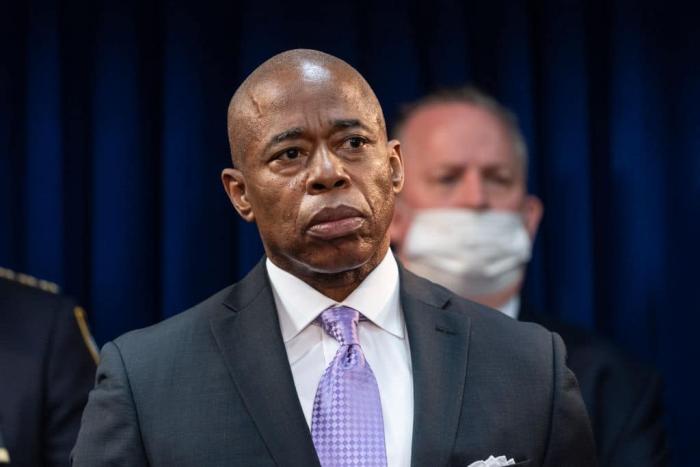 Eric Adams was sworn in as New York City’s Mayor on New Year’s Day. He decided to skip the honeymoon period after taking office and went straight to making everyone hate him within 72 hours. Bravo. Slow clap for you, mister. How did he accomplish this feat in record response time? It’s all about the swagger.

“When a mayor has swagger, the city has swagger. We’ve allowed people to beat us down so much, that all we did was wallow in COVID.”

First off, New York City hasn’t had swagger since Disney took over Times Square and the SatC ladies introduced everyone to Magnolia cupcakes. Every transplant who moves here from middle America and calls the cops on their neighbors for being too noisy brings our swagger points down. Every Target Express that opens brings us one step closer to being a swagger-less city.

Second, no one wants a mayor with swagger. Are we living in an episode of Starsky and Hutch? What the hell is this? We want a mayor with rational and sound policy-making abilities. We want a mayor who has our back against the skyrocketing cost of living, rising Covid hospitalizations, and socio-economic inequities. Boy did we pick the wrong guy.

My first job was at a Dunkin Donuts, and let me tell you, Mr. Swagger over here wouldn’t have lasted a single six-hour shift doing what I had to do. Doing what thousands of New Yorkers do every day to provide for their families and make ends meet. Not to mention the fact that the job market, although on the upswing under Biden, has made it necessary for plenty of people with college and advanced degrees to take lower-paying jobs to get by. There is no such thing as “low skill work.” Every job and every task takes skills. They just might not be skills you value until you need a bacon, egg, and cheese on a bagel, with a regular coffee at 6 o’clock in the morning, Mr. Swagger.

Mr. @NYCMayor, there’s no such thing as low skilled workers. That is a concept designed to suppress wages. You’re talking about people whose labor is essential to our everyday lives. Smh. https://t.co/RMBTDnq9sn

That’s Jessica Ramos, New York State Senator and Chair of the Committee on Labor up there. It’s a bad sign if the rest of his (alleged) party are already calling him out. I know that the rest of the country (world?) is probably sick of NYC being Big News. But even United Farm Workers chimed in on this line of bullsh*t.

Anyone in a corner office can come try our “low skill” work anytime pic.twitter.com/kUWy5cWALj

In his “Swagger Speech,” Adams also managed to anger everyone in the city who has been affected by Covid-19 by accusing us of “wallowing” in the pandemic. I beg your pardon, sir.

"All we did was wallow in COVID."
1.6M people in NYC got COVID and 40k died. What a thoughtless, callous statement to make. And ftr, one of the biggest problems of de Blasio was too much swagger.

For every progressive-minded citizen of this city there exist six pearl-clutching NIMBYs who were too afraid of Maya Wiley’s bold stance on social justice, and last year’s (righteous) rally cry to defund the police. Too many people could not imagine a strong, Black woman leading a city of this size. Or any woman. That’s how we got here. A whole bunch of people got to pat themselves on the back for voting for a Black man (see how progressive we are?), but don’t ever forget Eric Adams was a cop. He’s still acting like one. Aside from all of this gaffe-y nonsense, he’s already talking about rolling back reforms at Rikers Island and re-instituting solitary confinement. His new Department of Correction Commissioner, Louis Molina, has pushed out the Deputy Commissioner for Intelligence and Investigation, who tackled thousands of backlogged use-of-force cases over the past two years. Apparently, she wasn’t nice enough to the people she was investigating.

It’s clear which side of the issue Adams and his administration are going to take when it comes to police reform and accountability.

I don’t ever want to hear how progressive New York is again.

Y’all could’ve had Maya Wiley and elected Sgt. Ruckus instead.

We’re only five days into this administration. It’s going to be a long four years if Adams has raised everyone’s ire this fast. We’ve survived bad mayors before and we’ll survive this one, too. As one anonymous New Yorker put it when asked: “F**k. Him.”


← I Am Confused by the Trailers for 'Big Gold Brick' and 'Blacklight' | Review: 'Parallel Mothers' is Mid-Tier Pedro Almodóvar, Still Better Than Most Other Things →