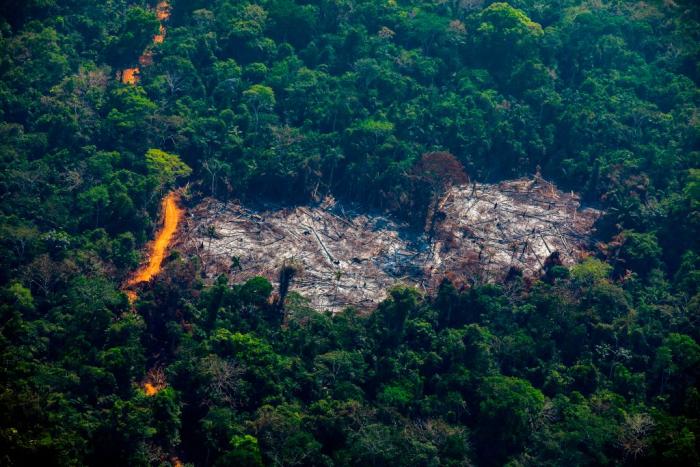 Almost exactly a year ago I wrote a piece about how climate scientists were sounding the alarm that due to the impact of capitalist industry and the climate change that has already begun, the world’s tropical rainforests—and the Amazon specifically—were on the cusp of turning from entities that acted as buffers against further climate change by being net absorbers of carbon, into engines that actually accelerate the climate crisis. Thanks to deforestation and other human industry, as well as wildfires and other climate change effects, rainforests were absorbing less and less carbon—a whole third less than they did in the 1990s—and some scientists were now predicting that the typical tropical rainforest may become a net source of carbon by the 2060s.

Well, guys, we’ve gone ahead and smashed the sh*t out of that expectation! As reported in the National Geographic, a new groundbreaking study of the Amazon that takes into account all greenhouse gases—not just CO2—shows that the South American rainforest will become a net contributor to climate change in…

It’s already happened, is the point I’m trying to make.

Touted for years as one of the planet’s most powerful defences against runaway climate change, the Amazon—which according to some figures removed as much as a quarter or all the CO2 removed by the world’s forests from the atmosphere—has now become part of the problem.

It’s a complex calculus that has led to the report, published last month in Frontiers in Forests and Global Change. There are many processes at play in the ecology of the rainforest. Forests act as carbon sinks thanks to the photosynthesis that sucks in CO2 and converts it into carbohydrates stored in wood. On the other hand, rainforests like the Amazon contribute to emissions due to the methane (a far more potent greenhouse gas than CO2) produced by microbes that thrive in their super wet soils. And then you have the mechanisms of the water cycle, by which moisture from the rain gets absorbed by leaves, used for photosynthesis, and then exhaled into the atmosphere as water vapour again.

All of these processes and more form a rich tapestry of absorption and emission, and all have been affected by the impacts of climate change and the industrial activity that causes it: Deforestation, mining, farming, and the building of reservoirs to name just a few. All impact the natural balance that rich ecosystems like the Amazon rely on. Indigenous peoples have long been warning of the impacts that the destruction of the forests will have, not just on their communities but on the planet as a whole. Their warnings have been cast aside and their communities brutalised. The interests of capital and the mantra of infinite growth on a finite planet were deemed more important.

The Frontiers in Forests and Global Change is the first time that an interconnected study of this scale has taken place in an effort to really measure the changes to the Amazon, and to tot up the effects of all the greenhouse gases at play. As per the National Geographic:

Deforestation in the Amazon hit a 12-year high in 2020. Illegal fires are on the rise. Large floods are triggered due to rain falling in more dramatic bursts than before. At the same time, droughts are becoming more frequent and are lasting longer.

Resource extraction, damming rivers, and the conversion of forest for soybean and livestock production all alter the natural systems in a variety of ways. But most serve to warm the climate. Methane is a particularly important player. While the largest sources of methane are still from natural forest processes, the Amazon’s capacity to take up carbon used to do far more to offset its methane emissions. Humans have diminished that capacity.

Patrick Megonigal, associate director of research at the Smithsonian Environmental Research Center, agreed. “What the authors do that’s important is to expand the conversation beyond carbon dioxide, which is what 90 percent of public conversation is centered around,” he says.

“CO2 is not a lone actor. When you consider the whole cast of other characters, the outlook in the Amazon is that the impacts of human activities will be worse than we realize.”

On top of all this, a recent analysis has shown that there is a chance that there is a chance that if 20 to 25 percent of the Amazon is cleared of forest then irrevocable changes may take place that trigger the rainforest’s transformation into a drier woodland savanna, dramatically reducing its abilities as a climate change buffer even further. The Brazilian government estimates that 17 percent of the forest has already been cleared.