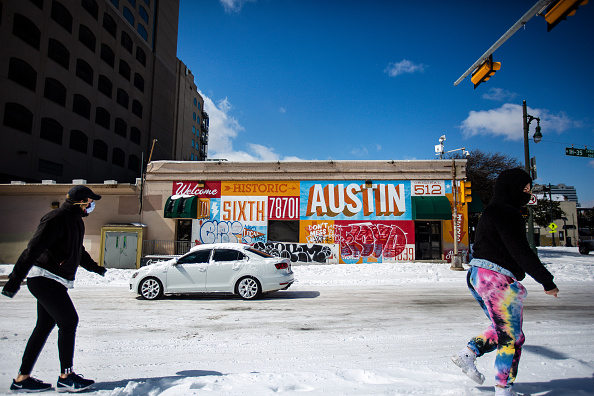 Morning Briefing: Mother Nature Is Playing Some Cruel Goddamn Tricks on the South this Week

When I graduated college in Arkansas, I was dating someone at the time whose parents wouldn’t let her move to Boston with me unless we got married, and so while it wasn’t a “shotgun marriage,” exactly, it was one that we would not have otherwise entered into were it not for her parents. That’s not to say that it wasn’t a serious relationship — we’d dated off and on since high school — but neither of us were ready or particularly well suited at the time for a lifelong committed relationship. But, to avoid the stain of “living in sin,” we accommodated her parent’s wishes.

It was a disaster. Two years in and the relationship had completely fallen apart. A couple of days before Christmas, I’d found out that she had had a relationship with a co-worker and one of my roommates. I was heartbroken. She had decided to move out, but we’d already made plans to return to Arkansas to stay with her parents over the Christmas holiday. She was very close to her parents, and they were very into Christmas, and though I didn’t want anything to do with her at the time, she didn’t want to tell her parents that we’d broken up yet, and I respected that. I flew back with her to stay in her parents’ house, a sort of off-the-main-road house situated in Arkansas woods. We’d go through the motions of being a couple; I’d spend as much time as possible away from her parents’ house visiting friends; and we’d get through two or three days, fly back to Boston, go our separate ways, and she could break it to her parents whenever she thought it was appropriate.

That was the plan, anyway. Now, for those of you who live in New England or the upper midwest (or Canada), y’all know that we can get 12 inches of snow at 9 p.m., and have it completely cleared early enough the next morning to get the kids to school and go to work. We are built for the winter, where by mid-March some of us have stacked so much snow along our driveways that we’ve constructed snow walls.

As we can see by what’s going on in Texas, that is not the case in the South, where an inch of snow will shut down school for the day. I don’t remember the temperatures getting in the single digits more than once or twice in my entire childhood, and those were probably the most brutally cold days I’d ever experienced. I’d never heard of snow pants; I’d never owned a pair of gloves (if our hands got really cold, we’d use a pair of socks as mittens). Hell, I’d never had a cup of coffee in my life until I was 24 and living in Boston.

That year I went back with my partner for the holiday, we got hit by a wave of freezing rain. It would have been a shrug of the shoulders in New England — just another day in December that ends in Y. But in Arkansas, it was devastating. A tree branch had snapped on the road near her parent’s house, and the power lines went down. I had to spend one week — an entire week — with no electricity, and no ability to escape with the woman I’d just discovered had been cheating on me and her parents, for whom I did not have a particularly good relationship.

My partner at the time had a sister, who was severely intellectually disabled. She was in her 20s, and lived in a home most of the year, but would come back for the holidays and spend most of the day in her wheelchair watching Sesame Street and other children’s programming. Without electricity, she had no television. It threw her entire schedule into disarray, that poor woman. It was one of the worst weeks I’d ever experienced, but playing Uno throughout much of the daylight hours was the only thing that got me through that week, most of which I spent under a blanket, because wood stoves and fireplaces aren’t really a thing in the South, either.

This is my way of saying: I really feel for all of you in Texas and in other parts of the South, where you’ve lost electricity and heat. Four million people have lost their power in Texas. I am reading that the northern parts of Arkansas are expected 12 inches of snow today, which is probably more snow than I saw in Arkansas in ten years. Texas is expected to see another half-inch of freezing rain today with temperatures around 0, and they have not seen temperatures that low in over a century. That’s the Maine equivalent of 110 degrees for a week without air conditioning. We would just melt, just f**king up and melt and die.

We are all feeling for you in the South this week, and especially in Texas, where in a better year I’d be heading in two weeks for SXSW. I hope y’all are all wearing two pairs of socks on your hands and playing lots of Uno until the Spring arrives (by the looks of it, that”ll this weekend in Texas). Hang in there. We are sending you our warmest vibes.