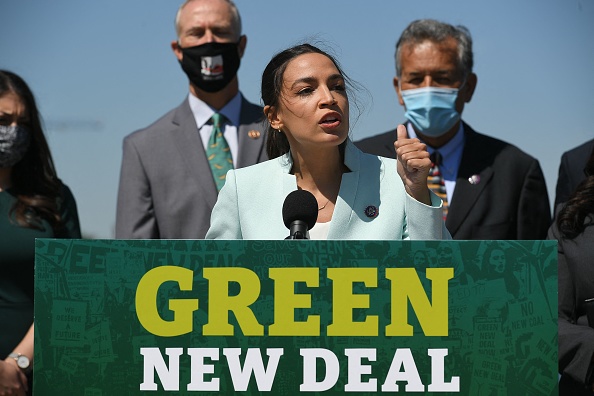 Morning Briefing: Will Trump Get His Facebook Account Back? Plus, MTG vs. AOC(?), and Murkowski Bucks Mitch

During a virtual climate summit today, Joe Biden pledged to reduce greenhouse gasses by 52 percent by 2030 — it is twice as ambitious a goal as Obama’s proposal. “This is a moral imperative, an economic imperative. A moment of peril but also a moment of extraordinary possibilities,” Biden said in his address. “Time is short but I believe we can do this and I believe that we will do this.”

To be honest, the private sector is already taking care of some of this — electric vehicles, more energy-efficient buildings, more solar/wind power, and many other technological advances. I know that Petr is a climate catostrophizer, and I 100 percent get why he would be, but goddamn, scientists are wizards. We obviously shouldn’t wait around for them to solve our problems, but I will say this: They might figure it out. I have a friend, who is an engineer, who is working on carbon sequestration. I had to look that up, but basically what it means is that this company is going to use kelp to capture 1000 years of carbon and then sink it to the bottom of the ocean, where it will become part of the geologic timeline. It’ll just turn into oil in a million years. Fascinating, and I think absolutely doable, and these engineers will be goddamn heroes for saving the planet. Blew my mind, though, that reversing a thousand years of carbon emissions was even theoretically possible. Let’s just hope we don’t somehow end up in Snowpiercer.

This is what Boris Johnson had to say about Biden’s proposal.

— Meanwhile, though he risks backlash from Turkey, Joe Biden is set to recognize the Armenian genocide, the first President to use the term ‘genocide’ to describe killings of Armenians by the Ottoman empire during First World War. That sounds like something our anti-imperialist friends would approve of.

— Speaking of our anti-imperialist friends, Bernie and Rep. Pramila Jayapal are introducing legislation today to make community college free to everyone and college free to families earning up to $125,000 a year. They’d do so by taxing Wall Street transactions. Love it.

— If you’ve been vaccinated and decided to return to your favorite restaurant and you see Help Wanted signs, there’s a reason. There’s a huge hospitality worker shortage. The pandemic led to the loss of 2.5 million restaurant jobs. A lot of those people have since found different jobs, and a lot of those people still don’t want to return for obvious reasons — it’s still dangerous out there. We may find that even more restaurants will shut down, not over lack of demand but over staff shortages. And yes, it is true that some restaurants cannot compete with enhanced unemployment benefits (McDonald’s is offering $50 just to get people to interview in some places), which really speaks again to why we need to raise the minimum wage.

— Speaking of the pandemic, it appears as though we are approaching that tipping point where supply is about to outstrip demand. That’s not great, considering that only 50 percent of the adult population has received at least one shot. We need 70 percent. If we don’t achieve herd immunity, variants are more likely. Get your shots, folks. Because — as we’ve seen in Israel — once all the adults get their shots, the infection rates among kids also plummets. I cannot stress this enough: Severe infections among children is rare, but trust me, that won’t make you feel any f**king better if it is your kid.

— Somehow, I don’t think that AOC has agreed to anything. Also, MTG hasn’t read the whopping 14-page document yet?

I’m glad I ran into you today @AOC to plan our debate about the Green New Deal.

After I finish reading all 14 pages, like we agreed, I’ll schedule time for our debate.#MTGvsAOC pic.twitter.com/viuH5Uj0oD

— Yesterday, the Senate confirmed Vanita Gupta to be associate attorney general by a 51-49 vote, over the objection of almost every Republican. But not Lisa Murkowski, who maybe doesn’t like being told what to do.

— Finally, I think that Facebook’s independent Oversight Board will make a decision today (or this week) on whether the suspension of Donald Trump will be permanent or not. Politicians are obviously on edge for a variety of sometimes conflicting reasons. Should Donald Trump have been deplatformed? Yes! Should Facebook be making those decisions? ¯\_(ツ)_/¯