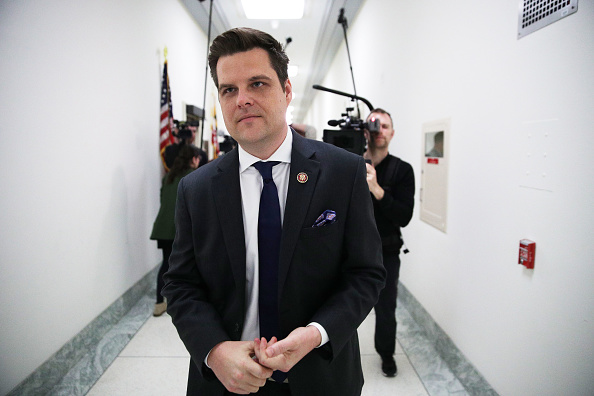 Well, well, well: The Matt Gaetz story just got more interesting, if what the conservative outlet The Washington Examiner is reporting is accurate. The extortion plot apparently involves a former Air Force intelligence officer and a former federal prosecutor trying to blackmail Gaetz’s father into giving them $25 million to be used to free American hostage Robert Levinson from Iran. The leverage was apparently photos of Gaetz in a “sexual orgy with underage prostitutes.” Whoa. The two men apparently also suggested that — if they were successful in their attempt to retrieve Levinson (whose family declared him dead last year), they would implore President Biden to pardon Matt Gaetz, and they seem to believe that Biden would be amenable to such a plan. (Obviously, Joe Biden isn’t going to pardon Matt Gaetz, people).

Gaetz is claiming that his father is wearing a wire in order to implicate the two men in the extortion plot (although, oops, why would you give that away, Gaetz?), and that the New York Times leaked details of the investigation in an attempt to thwart their attempts to apprehend the blackmailers.

— There was another mass shooting last night. This one was in an office complex in Orange County, California. Four people, including a child, were killed. It’s the fourth mass shooting in 15 days, although if you define a “mass shooting” as CNN does (four casualties — dead or wounded — excluding the shooter), it is the 20th in two weeks.

— The Georgia voting law is drawing more backlash, now among people who do business in the state. President Biden says that he would support moving the All-Star game out of Atlanta over the voting bill (not that Biden has any say in the matter), a number of CEOs have “expressed concern,” and Apple CEO Tim Cook has condemned the law. There are others, like director James Mangold, who say they will no longer base their productions in Georgia until the law is overturned.

As always, there is a double edge here. We obviously want corporations and CEOs to condemn the law, and while pulling their business might put some pressure on lawmakers, it also detrimentally affects many of the people the voting bill already hurts the most. It kind of sucks to punish thousands of crew members because Brian Kemp is a racist asshole. Ultimately, a better idea is to abolish the filibuster and pass a Voting Rights Act!

— Elaborate gender reveal parties maybe should be banned. I mean, what are we doing here, folks? From The Washington Post:

The small plane arced over a blue lagoon near the Caribbean Sea, flying low above a family in a boat on Tuesday afternoon. As they clapped, it released a pink cloud into the sky. “Girl! Girl!” a man aboard the boat yelled in Spanish, celebrating the dramatic results of the elaborate gender-reveal stunt for a new baby in the family. “It’s a girl!”

Seconds later, the family’s video shows, the small aircraft plummeted into the Nichupté Lagoon, a body of water off the east coast of Cancún, as the family and their guests watched in disbelief.
“No way!” a man cried in Spanish with an obscenity. “It went into the water.”

Both the pilot and the co-pilot were killed in the crash.

— Ivanka Trump’s flagship program — the Women’s Global Development and Prosperity Initiative — was a sham, according to the Government Accounting Office, which issued a damning report this morning.

← Sarah Palin Is Pro-Mask and Pro-Vaccine Now | 'Made For Love' On HBO Max And 'Invincible' On Amazon: This Week On Podjiba! →