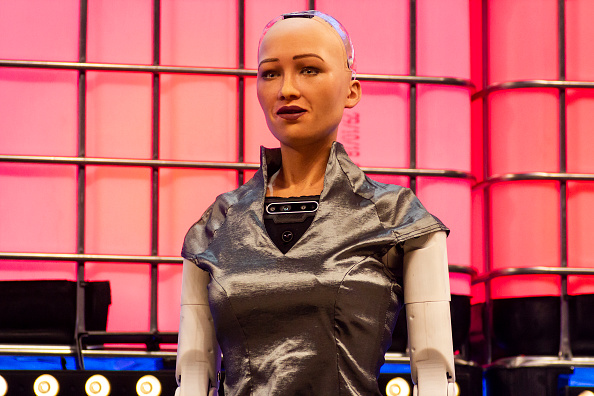 As progress against the coronavirus has stalled — new infections, fueled by variants, are up 20 percent since the low point in March — Joe Biden will officially announce today that everyone over the age of 16 should be “eligible” for the vaccine by April 19th. Governors in most states are heeding that call, while some states are making the general population eligible even earlier. Nineteen percent of the population has been fully vaccinated, although in a number of places, they’re just pretending that there is no pandemic — in Texas, for instance, the Texas Rangers hosted the Toronto Blue Jays yesterday in front of a sold-out crowd of 38,238 fans. You do you, America. Reckless motherf**kers.

— Sophia — a humanoid robot — was launched in 2016 by a Hong Kong company to help care for the sick and elderly by communicating, providing therapy, and social stimulation. There are plans to mass-produce Sophia and other humanoid robots this year, and they’re even making Grace, a sibling to Sophia. Sophia also produces digital art. In fact, she sold a piece of digital art as an NFT for $688,000 last month, and now she’s considering a career in music.

You know what I don’t feel bad about? Taxing the sh*t out of the rich. You know why? Because they’re spending $700,000 on digital art created by goddamn robots that probably steal medicine from old people.

— 60 Minutes is digging into Florida Governor Ron DeSantis’ possible pay-to-play scheme with the grocery store Publix, whereby they were given the ability to administer vaccines soon after providing a $100,000 contribution to DeSantis’ campaign. DeSantis’ is milking the controversy over on Fox News, where he gets to claim to be a victim.

— Yesterday, in a Supreme Court concurrence that has no real legal weight, Justice Clarence Thomas took aim at Section 230 of the Communications Decency Act, which protects social networks from being sued for the content that is published on their sites. Basically, Thomas wrote that social media companies are “sufficiently akin” to common carriers, such as a public utility, and should be “regulated in this manner,” which is interesting. It was clearly written because Thomas believes that right-wing Republicans are under attack by social media companies. On the other hand, there are probably a number of Democrats who also believe that social media companies should be regulated like a public utility.

I would just note, too, that the ability to abuse Section 230 of the Communications Decency Act is very high, as we learned this morning from the NYTimes The Daily podcast. It tells the story of a pissed-off, mentally imbalanced woman who decided to defame a family — including a 17-year-old — on a bunch of low-rent websites. She called them scammers and pedophiles, and that information came up on Google if their names were searched.

The family attempted to remove all of that fake information from these low-rent websites, but the websites are protected from lawsuits by Section 230, so they were like, “Eh. We’ll remove that information if you give us $2,000.” The defamatory information had been planted on dozens of websites, so obviously that was out of the question. Besides, it’s basically extortion. In fact, the NYTimes journalist who reported the story and her husband also got defamed on a number of low-rent websites by the same woman, who sought revenge against the reporter for even covering the story. There’s basically nothing that can be done about it because of Section 230. It’s kind of messed up. That’s not to say that Section 230 isn’t necessary, but it definitely needs some reworking.

The right is starting to get better at comedy and it's making lefties nervous pic.twitter.com/viTJOV0H1r