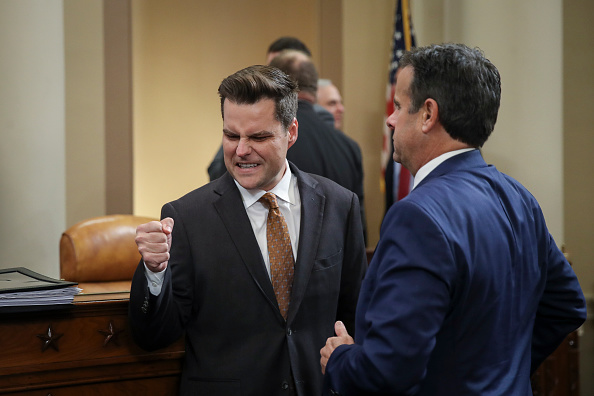 Good morning. In a historic vote yesterday, a House panel voted to advance a bill to study reparations. It really is historic, although “voting on a recommendation for a commission to consider reparations” still feels hollow, but it’s something. The Senate, meanwhile, passed legislation on a bipartisan basis to strengthen federal efforts to address hate crimes directed at Asian-Americans. It’s called the Covid-19 Hate Crimes Act, and it passed a procedural hurdle by a 92-6 vote.

— With a somber speech yesterday, Joe made official his decision to pull troops out of Afghanistan. Meanwhile, Secretary of State Antony Blinken made an unannounced stop in Afghanistan to reassure the government that we’d still have their back, even though we’re pulling our troops.

Joe appears to be turning his focus toward international relations this week because he also imposed new sanctions against Russia. The sanctions against Russia were for meddling in the U.S. election, its massive hacking operation, and for offering bounties to kill U.S. soldiers. These were all sanctions that Donald Trump obviously should have applied, but he left it to Biden, who is determined to make these sanctions hurt (the ruble’s exchange rate to the dollar dropped about 1 percent in early trading, a reflection of their nervousness over how the sanctions will play out).

— In the Derek Chauvin trial, the former Maryland chief medical examiner David Fowler testified yesterday, blaming George Floyd’s death on illicit drug use and heart disease. However, on cross-examination, even Fowler admitted that Floyd could have been revived if Derek Chauvin or others at the scene had given medical attention.

— In COVID-19 news, while numbers have plateaued nationwide (but are still dangerously high in some states), there have been reports of 5800 “breakthrough cases,” where fully vaccinated people have been infected. Seventy-four have died and 396 have been hospitalized. Out of 77 million fully vaccinated cases. What does that mean? It means that the vaccine is not 100 percent effective, but it’s pretty damn close.

— Finally, it turns out that Joel Greenberg has been dishing to the feds about Matt Gaetz for months. From the New York Times:

Joel Greenberg, a one-time county tax collector, disclosed to investigators that he and Mr. Gaetz had encounters with women who were given cash or gifts in exchange for sex, the people said. The Justice Department is investigating the involvement of the men with multiple women who were recruited online for sex and received cash payments and whether the men had sex with a 17-year-old in violation of sex trafficking statutes, people familiar with the inquiry have said.

Mr. Greenberg, who is said to have met the women through websites that connect people who go on dates in exchange for gifts, fine dining, travel and allowances and introduced them to Mr. Gaetz, could provide investigators with firsthand accounts of their activities.

Mr. Greenberg began speaking with investigators once he realized that the government had overwhelming evidence against him and that his only path to leniency lay in cooperation, the people said.


← Chet Hanks Is Being Sued For $1 Million by His Ex-Girlfriend | Anupam Kher, Who Plays Dr. Vijay Kapoor, Is Not Returning to 'New Amsterdam' →