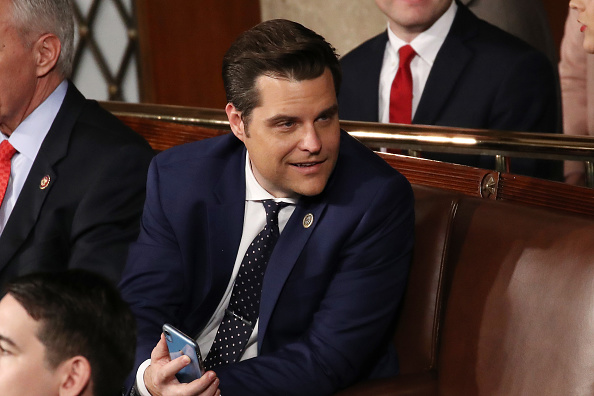 Good morning. The latest on Matt Gaetz is that his own aides sent embarrassing videos of him to other Republican operatives. It’s unclear what is on the videos — and they are not related to the federal investigation — but what is clear is that even Gaetz’s own staff hates him.

Katie Hill, whom Gaetz defended when she was embroiled in her own scandal, and who reciprocated when Gaetz came under fire for living with a 12-year-old he called his son, is now calling for Gaetz’s resignation if the accusations against him are true. From Vanity Fair:

“Let me state it as clearly as possible. If, despite his denials, Matt Gaetz did have sex with a minor, if he did provide girls and young women with drugs and money and gifts in exchange for sex, if he did ask these girls and young women to recruit other women for the same purpose, and if he did show his colleagues images of nude women without their consent, he needs to be held responsible. Some of these actions are criminal and some of them should be. All are morally reprehensible and unacceptable for a lawmaker. If there is even a fraction of truth to these reports, he should resign immediately.”

It also turns out that Gaetz — one of the former President’s most outspoken defenders — also sought a preemptive blanket pardon for himself and other political allies in the final weeks of that man’s term. The White House declined to offer him one because it didn’t want to set a bad precedent with preemptive pardons. In fact, even now, neither Trump nor anyone in his orbit wants anything to do with the man. From Politico:

Operatives inside T—-p World say the silence is owed to a variety of factors. Among them is the fact that Gaetz has always been regarded as a grenade whose pin had already been pulled. The congressman had a reputation for a wild personal lifestyle that, associates say, occasionally bordered on reckless.

Gaetz — being the despicable man he is — is nevertheless fundraising off of the teen sex trafficking probe. Meanwhile, while Gaetz has remained largely out of public view, he will be the keynote speaker at a conservative women’s group’s conference. The group is a pro-Trump organization called Women for America First, and the event will be held on Trump’s Miami golf course. Among others who are speaking are Rep. Marjorie Taylor Greene, Sen. Rand Paul, and Rep. Louie Gohmert, so, you know, the best the Republican party has to offer.

Tonight, Tucker Carlson opened up his show with a full-throated defense of the insurrectionists.

He went on to act as if those being arrested were not committing real crimes and the arrests were somehow politically motivated.@FoxNews is airing undemocratic gaslighting garbage.

Meanwhile, look! Someone in the Trump Administration finally experienced some consequences for violating the Hatch Act! Of course, it’s a Black woman and not, say, Kellyanne Conway, who repeatedly violated the Hatch Act.

This is very good. But it also raises a question as to why OSC didn't seek fines against Kellyanne Conway for her dozens of violations. The law exempts Senate-confirmed political appointees from fines. Other political appointees, like Conway and Patton, are not exempt. https://t.co/wfJNlZmCFU

Elsewhere, this quote from Mitch McConnell yesterday seems to be an actual attempt to have his cake and inhale it, too: “My warning to corporate America is to stay out of politics,” McConnell said at a news conference, before adding, “I’m not talking about political contributions.” Later that night, he probably told his wife, “I do not have sex outside the marriage! Brenda doesn’t count!”

In COVID news, numbers continue to jump (sh*t is getting real again here in Maine), although 80 percent of K-12 teachers have now gotten at least one shot. That’s good news! Meanwhile, it looks like the country is going to divide itself over “vaccine passports,” even though such things will probably never be implemented at the federal level. Now, if private operations — like clubs, or sports stadiums, or employers — want to implement them, that’s up to them, and fully within their rights. And if school and colleges do? Well, ain’t no difference between that and requiring a polio shot. This is a dumb argument (although, I fully support vaccine requirements).

In legislative news, the Senate parliamentarian has ruled that the budget reconciliation process — the tool used to get around the filibuster and pass last month’s COVID relief bill — can now be used several times a year, meaning that Biden can also use it to pass his infrastructure bill, as long as he can get all 50 Democrats to sign on. The infrastructure bill would also provide a lot of social services that poll well with suburban and women voters, which will hopefully ease reelection efforts for the 2024 Democrat. From Politico:

It’s a once-in-a-generation opportunity to remake the structure of the American workforce and potentially firm up an electoral realignment that was hastened during the Trump years. And, to the administration’s delight, polling shows that voters — suburban dwellers and women in particular — are embracing not just those individual components of the bill, but the broader concept of the federal government stepping in to help with their problems.

Finally, in Arkansas, Governor Asa Hutchinson — a very conservative, evangelical — vetoed an anti-trans bill that would have prohibited minors from receiving puberty blockers, hormones, and any transition-related surgeries and would have stripped away the licenses of any health care official who would have provided such services. Hutchinson says that the bill went “too far,” and placed an already “very vulnerable population in a more difficult position.” Unfortunately, the state legislature overrode the veto and passed the bill anyway, placing a very vulnerable population in a more difficult position. The law is the first of its kind in the country.

← Piers Morgan Took a Shot at David Simon and He Best Did Miss | 'The Mighty Ducks: Game Changers' And More 'Made For Love' On Podjiba! →