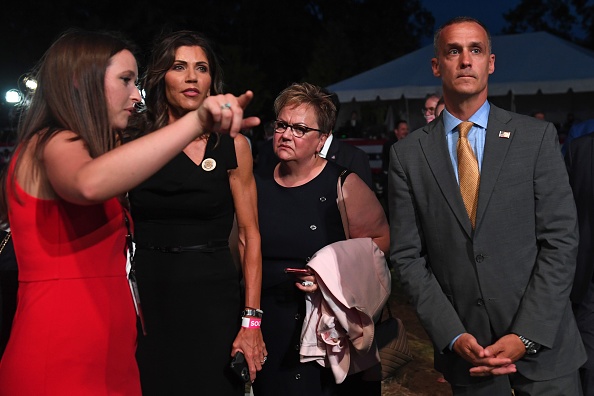 Morning Briefing: It's Going Sideways for Democrats; Lewandowski Pushed Out for Groping

Things are not going well for the party in charge of both chambers of Congress and the White House, as Biden has been unable to reel in either the moderate Democrats in the Senate or the progressive Democrats in the House. No one is playing ball. Manchin and Sinema continue to hold up Biden’s $3.5 trillion social policy plan in the Senate and have not publicly illustrated any desire to compromise, while liberals in the House continue to endanger the otherwise popular $1 trillion infrastructure bill. House progressives are threatening to blow up the infrastructure bill if Sinema and Manchin don’t come to the table to earnestly discuss the social policy bill.

Meanwhile, the House is also working to avert a government shutdown, which would happen today if the House doesn’t get its shit together. It looks like Congress will manage to avoid shutdown, though the infrastructure plan is very much in danger. Sinema is at least speaking with the White House about the social policy bill, but Manchin feels no such urgency and does not expect to come anywhere close to an agreement on it by day’s end. That means if Pelosi puts the infrastructure bill on the floor, she risks seeing it fail if the House progressives balk because Manchin/Sinema are being a douchebag about the social policy bill.

Failure to pass the infrastructure deal or the social policy bill might also have grave political consequences, not only for the midterms but for the Virginia governor’s race, where Democrats are worried that Terry McAuliffe could lose in an increasingly blue state where a Republican hasn’t won a statewide race since 2012. That would be disastrous because it could portend a bloodbath for Democrats in the midterms — as it did in 2009 — and a bloodbath this time would mean Congress being taken over by lil’ Trumps.

I thought we’d have a little more time to bask in a country without Trump’s constant influence. However, the Democrats’ inability to agree on anything could give the Trumpists the opening they need. Then we’re screwed. We cannot underestimate those assholes again.

In Trumpworld, Corey Lewandowski — Trump’s first campaign manager in 2016 and an influential figure in that world ever since — has been pushed out after he was accused of harassing, groping, and stalking a Republican donor at a fundraising event over the weekend. Politico has the story, and the details are gross: Lewandowski simply would not leave this woman alone, no matter how many times she rebuffed him. He followed her around, kept inappropriately touching her, and kept talking about having sex with her while commenting on her body (and his own dick). “He repeatedly touched me inappropriately, said vile and disgusting things to me, stalked me, and made me feel violated and fearful,” Trashelle Odom told Politico.

John Odom, the husband of Trashelle, said that Lewandowski called him to apologize, according to the Post. “He sounded distraught and scared. He said he had been intoxicated. He was sorry for his actions, wanted to know how he could make it go away, and that he would do anything to make it right with Trashelle and our family.”

Separately, South Dakota Gov. Kristi L. Noem was also at the fundraiser, and there are rumors now flying that Noem and Lewandowksi had a months-long affair, which Noem denies.

These rumors are total garbage and a disgusting lie. These old, tired attacks on conservative women are based on a falsehood that we can't achieve anything without a man's help.

I love Bryon. I'm proud of the God-fearing family we've raised together. Now I'm getting back to work

The allegations of an affair were first reported by American Greatness based on several unnamed sources. The affair was also said to be an “open secret.” Noem, a potential VP candidate for Trump in 2024, is facing a host of other scandals in her home state of South Dakota.

It’s worth noting that Lewandowski also reportedly had an affair with Hope Hicks, who later had an affair with another Trump aide, Rob Porter. The rumor is that jealousy over the affair between Hicks and Porter led Lewandowski to leak allegations of domestic assault by Porter on his wife, which eventually led to Porter’s firing.

Do we really want to go back to this bullsh*t? Figure this mess out, Manchin and Sinema, or we’re looking at another four years controlled by the likes of Donald Trump and Corey Lewandowski.

In other news, Al Franken is testing out material as he preps a national stand-up tour. Make of that what you will.