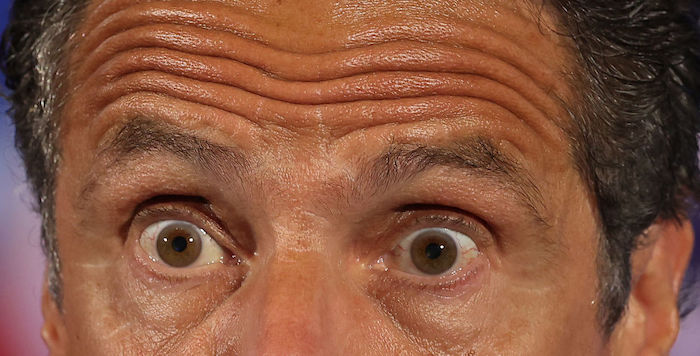 Good morning, everyone. If you haven’t finished all your grousing/celebrating about the Oscar nominations, head on over here to do so. Otherwise, well, Andrew Cuomo hasn’t resigned yet. Chuck Schumer and Kirsten Gillibrand have called upon him to do so, as has most of the New York delegation in Congress, both state and federal. Support for Cuomo has basically collapsed, except from Larry Schwartz, who is New York’s vaccine czar. He’s been out trying to drum up support for Cuomo, which is not a great look, as it gives the impression that vaccine distribution might be tied to support for the Governor. That’s messed up.

If you’d asked me last Monday, I’d have said that Cuomo would survive. If you’d asked me on Thursday, I’d have said he’d be gone by Friday. But here it is Monday again. Cuomo, like Trump, has an ability to wallow in public pressure, but unlike Trump, Cuomo doesn’t have much of a base rooting for him to survive this, because Democrats aren’t cult members. There have been six misconduct and harassment allegations, and where there’s six, there’s probably eight or 12, and that on top of the nursing home scandal suggests that there could be more allegations, which will make it far more difficult for Cuomo to keep his head down until all of this blows over. Ralph Northam survived his Blackface scandal in Virginia because he could wait it out until the news media moved on to another story, and with Trump around, there was always another story. Right now, Cuomo is the scandal, and with Blessedly Boring Biden running things, I don’t expect that to change until Cuomo steps down.

Elsewhere, the vaccine rollout continues to go well. We got up over 3 million doses administered per day over the last few days, and while most states — under Biden’s guidance — will make the vaccine available to everyone by May 1st, Scott Gottlieb is saying that it could happen even sooner, particularly if there’s as much vaccine hesitancy as the polls suggest. Something like 47 percent of Trump supporters say they will not take the vaccine, which makes zero sense, because demographically speaking, they are the most likely to suffer serious infections, Trump’s Operation Warp Speed helped to get these vaccines into the world (and Trump is trying his damndest to take credit for it), and Trump himself took the vaccine. It just feels a little sabotage-y to me. Fauci was out there yesterday saying that it would make all the difference in the world if Trump encouraged his supporters to take it, and he used as much flattery as possible to do so. Trump, alas, is adrift. He is not taking America’s calls, at the moment. However, according to the Post, those folks can be persuaded through public education campaigns that do not include politicians. You know what else will persuade them? Requiring vaccinations for their jobs and for their kids to go to school and in order to go see concerts or go to restaurants. We’ll see how far down the road America is going to be willing to go on that front.

Meanwhile, while most teachers hopefully will have been vaccinated by April or mid-April, the new battleground on that front will be the distancing requirements in schools. Right now, it’s six feet, which will make it difficult for a lot of schools to reopen full-time. However, while the CDC has not yet changed their guidelines, there is a growing body of evidence that shows 3 feet is sufficient, except while eating, which may prove to be another difficulty because kids gotta eat.

Related: New infections dropped below 40,000 yesterday for the first time in I don’t know how long. Actually, I do: October 4th, 2020 was the last time infections were under 40,000. Things haven’t been that great on the East Coast, though, even as infection rates drop everywhere else while things have plateaued here. I assume that a variant is at play, particularly in New York.

Meanwhile, the next big battleground for Biden will be a new Voting Rights Act, and the only way for it to succeed is if the Democrats bend the rules on the filibuster, and the only way for that to happen is to convince Joe Manchin to kill it. Manchin has adamantly refused to do so, but he has shown some willingness to changes the rules about the filibuster, specifically to make it “painful” to use, as in, Senators will have to continue to stand up and speak. If the GOP continues to obstruct Biden’s agenda, maybe Manchin and Sinema will become more amenable to making the use of the filibuster even more painful by, say, making Senators stand on one leg and speak continuously. 🤷