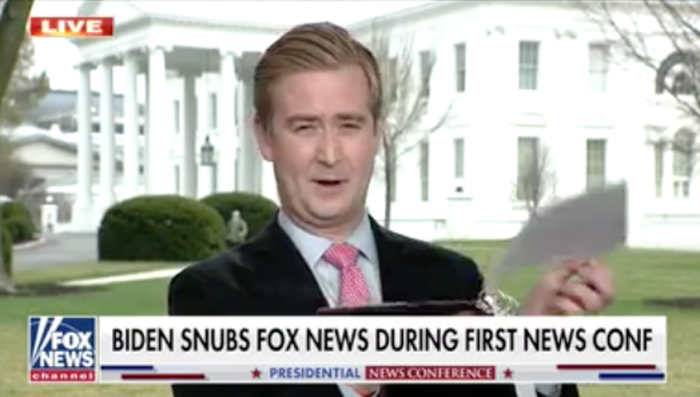 If you’ve glanced at Twitter or Facebook in recent weeks, it’s hard to miss the drumbeat that Fox News has been beating about the fact that President Biden has yet to hold a solo press conference, never mind that the Press Secretary holds them so often that the media no longer even pays attention to them because facts and information are not interesting. Yesterday, Biden held that first conference, and I’m sure that Fox News finally laid off the man and gave him some peace about the issue. Right?

Apparently not. Because as soon as the press conference was over, they started asking why he’s only held one press conference so far, and then instead of attacking him for his gaffes, they went after him for being … overprepared.

"Biden is in cognitive decline" has shifted to "Biden is overprepared" literally overnight on Hannity's show. The shameless is incredible. https://t.co/qFks68wjwy

There was no winning. There never was. The only way to beat Fox News is to do what Biden has done throughout his first few months in office: Ignore them. Don’t even bother with them, and then you leave them to fill 24 hours of cable coverage with tedious bullshit like the number of days Biden hasn’t held a press conference or running on a loop the time that Biden tripped going up the stairs.

Peter Doocy has a binder of the questions he didn't get to ask pic.twitter.com/7O86qhu8S1

Under Trump, sometimes it felt like there weren’t enough hours in the day to adequately cover all the bullsh*t, but now there’s not enough bullsh*t for Fox News to cover, and so this is all they’ve got.

Also, what’s Biden supposed to say when asked if he’s going to run again in 2024? He gave the answer that would create the least amount of news. Will he actually run in 2024? Who knows? It might not matter, however, if states continue to pass restrictive voting laws like what was done in Georgia yesterday, because those laws are going to prevent Democrats from voting and Democratic candidates from winning. Basically, Georgia wiped some of the gains that Stacey Abrams made in Georgia.

It introduces a raft of new restrictions for voting and elections in the state, including limiting drop boxes, stripping the secretary of state of some of his authority, imposing new oversight of county election boards, restricting who can vote with provisional ballots, and making it a crime to offer food or water to voters waiting in lines. The law also requires runoff elections to be held four weeks after the original vote, instead of the current nine weeks.

Similar voting restrictions have been passed in Iowa (where there is likely an open Senate seat in 2022), and they’re being planned in places like Arizona. I am particularly worried about that provision stripping the secretary of state of some of his authority because that sounds like it might allow the Governor to overrule the Secretary of State, which could be … messed up in a state like Georgia, where Brian Kemp — the governor who signed the bill into law — is running for re-election.

"Our ancestors are looking down right now on this House floor, praying and believing that our fight, and that their fight, was not in vain. We call on the strength of Congressman John Lewis in this moment. Because right now, history is watching."

Just a little head’s up here, y’all: Even as Biden is preparing to deal with a “glut” of vaccine, the infection numbers are rising. Up 3 percent in the last 14 days. If we’re not careful, we’re going to have another surge like the one in Europe, although our numbers are really already at surge level — they’re just so much lower than they were in January that we’re not giving them much thought. A lot of us still haven’t had the chance to get the vaccine, so for god’s sake, wear those masks for the unvaccinated adults and their immunocompromised children who won’t have a chance to take the vaccine for many more months.

Finally, Dominion has filed a defamation suit against Fox News for $1.6 billion over 2020 election claims. It is the second such lawsuit filed against the network. I hope they take the network for every goddamn nickel.

← Britney Spears Petitions Dad to Resign From Her Conservatorship | 'Jeopardy' Fans and Former Contestants Are Not a Fan of Guest Host Dr. Oz →