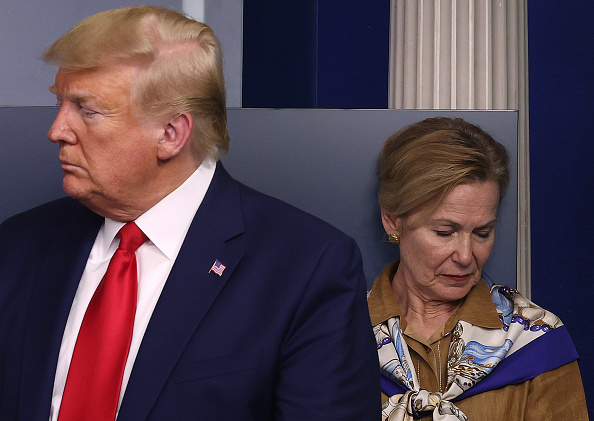 Morning Briefing: A Year Later, Tucker Carlson's Past, and Another Explosive Gender-Reveal Party

It’s been one year since this moment in American history:

April 23rd, 2020: A significant and powerful moment in U.S. history. The day a sitting president of the United States used a press briefing to discuss the possibility of injecting disinfectant(which no one should ever do) pic.twitter.com/75kGQkD0h7

I mention it to remind you of what a buffoon our former President was, and I mention it so that no one forgets that Dr. Birx sat there and watched our former President encourage people to inject bleach into their veins, but mostly I bring it up to remind us that it was a year ago. I don’t want to dismiss the sickness, the death, the economic fall-out, and the months of teaching our kids common-core math, but there were some of us — myself included, on some days — who didn’t think we’d make it to April 23, 2021.

The days are long, and the years are fast, and for any of you who are still going through difficult or challenging times, who still wake up every morning with a pit of anxiety and sadness below your rib cages, hopefully, a year from now, you will wake up relieved of that ache. It feels like forever when you’re in it, but it goes by so fast. As Coach Taylor says, “We will be tested. Tested to our very souls.” If you’re not on the other side of this yet, we’ll get there. As the old Jewish proverb goes, “Ask not for a lighter load, but for broader shoulders.”
For those of you who look like an offensive lineman for the ‘86 Bears, thank you for carrying the load.

— Tucker Carlson warned us a couple of days ago that Jeff Bezos (i.e., The Washington Post) was doing oppo research on his college days. He was very dismissive, basically saying, “Eh. It was 1987. Who cares?!” What has been unearthed, so far, is that Tucker Carlson was a self-proclaimed member of the “Dan White Society” and the “Jesse Helms Foundation.” Neither of these “clubs” existed. Carlson made them up because that’s how he wanted to be remembered: As a member of a foundation named after a virulent white supremacist, and a part of a society named after the man who murdered gay-rights activist and the first openly gay elected official in the history of California, Harvey Milk. It’s been 34 years, but for Carlson — who has been pushing white-replacement theory on his show — some things never change.

— On the other side of the political spectrum, in NYC, Andrew Yang met with the Stonewall Democratic Club of New York City — a prominent LGBTQ organization — in order to elicit their endorsement. He did the opposite. His attempt at outreach — in which he cited gay members of his staff as evidence of his bona fides, and expressed enthusiasm about visiting the lesbian bar, Cubbyhole — was described as pandering and tone-deaf. He still leads in the polls, however.

— Also in New York, Andrew Cuomo is preemptively trying to undermine/smear Attorney General Letitia James, who may run for Governor against him next year, by suggesting that investigations into Cuomo are politically motivated. I really want this guy to get his ass kicked next year. I’d really like to see AG James do it.

Pretty unreal: Cuomo spox says investigations are “Albany politics at its worst — both the Comptroller and the Attorney General have spoken to people about running for governor, and it is unethical to wield criminal referral authority to further political self-interest." https://t.co/KSjFF6gc49

— In a (weirdly positive) sign of how far the GOP party moved, key Republican members are actually open to corporate tax increases now. It turns out, they’re having a hard time hiding their pro-corporate agenda behind their bigotry, so now they just have to do both, I guess.

— On the other hand, here’s Josh Hawley — who is trying to take over Trump’s populist mantle.

BREAKING: The Senate passes the COVID-19 Hate Crimes Act to combat hate crimes against Asian Americans by a vote of 94-1.

The lone "no" vote was Josh Hawley.

— Finally, in New Hampshire, there was an explosion that sounded like an earthquake and literally cracked the foundation of nearby houses. What was it? Another goddamn gender-reveal party.

The massive explosion that rocked their Kingston, N.H., neighborhood and rattled nearby towns had come from a quarry by the plant, police said — but it had nothing to do with making concrete.

Instead, a man detonated 80 pounds of explosives as part of an elaborate gender-reveal party stunt, the Kingston Police Department told the New Hampshire Union Leader.

Fortunately, there were no injuries, but people: The sex of your baby is really not that big of a deal. No one cares. The father-to-be responsible for the explosion turned himself in to authorities. It’s a boy, by the way.