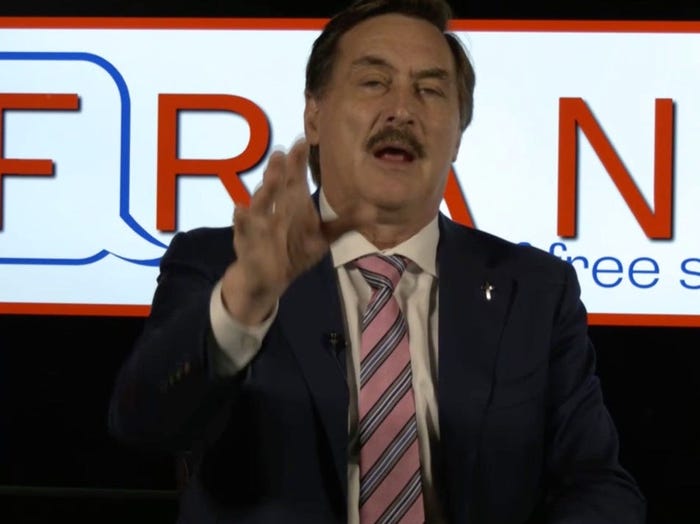 The MyPillow Guy Is Having a Hell of a Week

Mike Lindell — the MyPillow scam artist/Trump loyalist who provided Donald Trump with advice to overthrow the 2020 election and hold a new one under martial law days before the Inauguration — launched a new social network yesterday. Or tried to, anyway. Lindell, who also announced that he will sue Dominion voting machines for $1.6 billion after Dominion sued him for $1.6 billion for defamation, ran into some early hiccups, however, when that social network, Frankspeech, crashed upon launch.

“It’s going to be the greatest place, we won’t be censored. Everyone is going to be able to get on there,” Lindell said before the social network went kaput. (Reportedly, there is some censorship, too, specifically posts that take the Lord’s name in vain will be deleted). Lindell blamed foreign actors and also Democrats when the problem probably had to do with the fact that the CEO of a pillow company tried to launch an entire social network.

Lindell, in turn, decided to broadcast live for 48 hours or until his site came back online. It was a mess, as Jimmy Kimmel — with whom Lindell has a mutual obsession — cataloged last night during the monologue.

Lindell, who co-hosted the telethon-like launch along with Michael Flynn, had a number of guests on, including the usual array of right-wing nutjobs (Ben Carson, Dinesh D’Souza, etc.). At one time, Lindell also believed that he was receiving a phone call from Trump, “our real president,” but it turned out to be a prank caller who delivered a stream of profanities.

Mike Lindell was just duped into thinking Trump was calling into the program. pic.twitter.com/VUMy1etNA3

The site eventually did come up, although it contains an enormous amount of misinformation. I wouldn’t visit the place unless you want to willingly read coverage of Marjorie Taylor Greene, anti-BLM propaganda, or hear names like Jenna Ellis and Sidney Powell that you never thought you’d hear again after January 20th.

Meanwhile, I’m not saying that Chris Pratt or Katherine Schwarzennegar Pratt have association whatsoever with Lindell or FrankSpeech, but it sure seems like they’re big fans of them, for whatever that is worth.