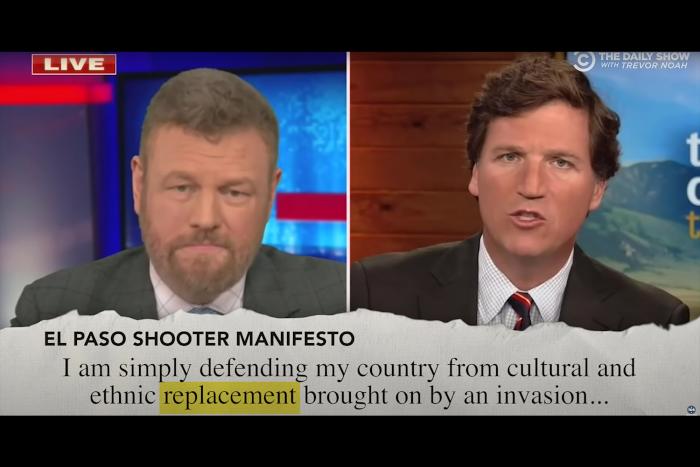 Out in Minnesota, where the trial of Derek Chauvin in the death of George Floyd enters its third week, a police officer has senselessly killed another Black man only ten miles away from where the Chauvin trial is taking place.

Our understanding is that the police pulled over 20-year-old Daunte Wright because he had air fresheners hanging from his mirror, according to Wright’s mother, who was on the phone with Wright at the time he was pulled over. The police say they fired their weapon at Wright — who police said had a warrant out for arrest — when he tried to reenter his car while being taken into custody during a traffic stop.

It has obviously inflamed tensions, because what the hell, police?

Dozens of Brooklyn Center residents who live in the apartments across from the police precinct are peering out their windows filming the tense encounter will police. Flash bangs keep exploding above and around their building. People yelling: “Children live there!!” pic.twitter.com/9PMh87qeAd

— There was a blackout at an Iranian enrichment site yesterday that the Iranians are blaming on Israel (and intelligence services have concluded that Mossad was behind the attack). Israel wants to prevent Iran from nuclear capabilities for obvious reasons (Iranian leaders want to destroy Israel), while Iran says that their nuclear program is a peaceful effort at energy development. The Biden Administration is trying to keep their distance from Israel here because they’re trying to shut down and/or limit Iran’s nuclear program in exchange for lifting sanctions, and this obviously complicates matters. Iran has vowed revenge, and the whole thing has thrown efforts to get Iran to return to something akin to the agreement Iran signed with Obama in 2015 into disarray. It’s a mess.

— Speaking of Israel, they have basically reached herd immunity there, and infections have plummeted 97 percent thanks to their mass vaccination campaign. In January, they had nearly 10,000 infections reported a day. Yesterday, they had 122. The vaccine works, y’all. Get it.

Likewise, over in England, the weather sucks, but lockdown restrictions are being partially lifted and our friends can return to the pubs, thanks to their vaccination efforts. Nearly 50 percent of the population has received at least one dose over there, and for the record, part of the success of their vaccination campaign can be attributed to our very own resident pinko Commie, Petr Knava, whose work involves getting those vaccines into arms. Dude’s a literal hero.

Sh*t is still a mess here in America infection-wise, but we can take solace in the fact that deaths fell below 300 yesterday for the first time since March 2020. Again, vaccines work. The evidence is right there for all the world to see. You need only look at the number of deaths yesterday in the countries where the vaccine has been administered the most: America (276), the UK (7), and Israel (4).

— On Saturday night, out at Mar-a-Lago, Trump gave a speech where he repeatedly repeated the Big Lie, continued to blame Pence for not standing up for him, Georgia Governor Brian Kemp for not overturning the election results there, and Mitch McConnell, whom he called a “dumb son of a bitch. He also said that Fauci was “full of crap.”

Most of the GOP has remained silent (including McConnell), but at least now, there are a few voices within the party pushing back (Liz Cheney, Asa Hutchinson), and look: I’ll take all the divisiveness within the GOP that we can get, as the Democrats continue to gain the support of so-called “Biden Republicans.”

The lie is not really the point here. I’m just, like, happy that we are back in a place where misleading statements — of which this was a very minor one — are not just accepted as routine anymore. I understand the hypocrisy of the same network that would have allowed Trump to get away with literal murder taking a Transportation Secretary to task for a minor misstatement that absolutely no one was paying attention to, but I still appreciate that calling out misleading statements is a thing that the media is doing again.

— Finally, last week, Tucker Carlson referenced white replacement theory — the idea that immigrants are diluting the political power of white people — in a segment that was just … unhinged (and later endorsed by the author of Hillbilly Elegy, J.D. Vance (how you feeling about that movie now, Ron Howard?).

“Now, I know that the left and all the little gatekeepers on Twitter become literally hysterical if you use the term ‘replacement,’ if you suggest that the Democratic Party is trying to replace the current electorate, the voters now casting ballots, with new people, more obedient voters from the third world. But they become hysterical because that’s what’s happening actually. Let’s just say it: That’s true … Every time they import a new voter, I become disenfranchised as a current voter.”

Tucker Carlson basically has no mainstream advertisers left (it’s like the Pillow Guy and probably diet supplements for the elderly at this point), but the anti-defamation league is demanding that Carlson be fired, suggesting that his rhetoric is “deadly dangerous.” They are not wrong. He’s trying to stir panic among white supremacists, and we have seen the results of panic among white supremacists. It either results in mass shootings or voting bills like the one passed in Georgia.