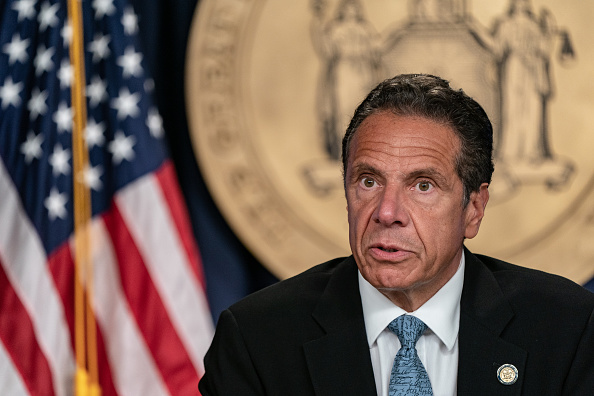 I was gonna skip the daily political post today because of the Golden Globes, but I had second thoughts about that because I don’t want anyone to get the idea that we are ignoring what’s going on with Andrew Cuomo because he is a Democrat. A second woman accused the New York Governor of sexual harassment this weekend. He called upon AG Letitia James to independently investigate the accusations, but then he conceded that he made the statements of which he was accused and apologized.

“I acknowledge some of the things I have said have been misinterpreted as an unwanted flirtation. To the extent anyone felt that way,” he said. “I am truly sorry about that.”

That’s not an apology. That’s closer to gaslighting, and I don’t want to get into any whataboutism here, as in, “Yeah, but Trump did this …” What would we say if a Republican were accused of the same thing? We’d say they should be tossed out of office, and then we’d resign ourselves to the fact that nothing will probably happen, although that does not mean that something should happen. Some New York Democrats are calling upon Cuomo to resign, and in light of the nursing home scandal and two sexual harassment accusations (and where there are two, there are invariably many more), that seems more than reasonable.

I'm in awe of this Biden video on labor organizing. It's not only an affirmation of support, reaching beyond a target constituency, it's a perfect statement of some principles of labor law that lots of people don't know. Like, your employer's opinion about a union doesn't matter. https://t.co/sogjQfdZW0

On the other hand, I could not be more disappointed in the Biden Administration’s decision to essentially look the other way when it comes to the murder of Jamal Khashoggi. I know that Middle-Eastern politics are a clusterf**k and he’s in a no-win situation, but it is absolutely insane that Saudi Crown Prince Mohammed bin Salman is going unpunished. In a no-win situation, the least you can do is take the moral high ground.

Yes, hi, I see all you folks willing to look away from the brutal slaughter of a US resident and Washington Post columnist because you like this president and thus it doesn’t bother you that Biden isn’t punishing the Saudi Royal Prince responsible. You’re wrong.

On the stimulus deal, Biden is not going to compromise with the Republicans. He’s going to pass it with or without their support. However, he still needs the Democrats’ support, which means appeasing Joe Manchin. The progressives, however, still want to include a minimum wage hike. And listen: If the Democrats don’t pass a $15 minimum wage, the Trump Republicans will over the objection of the McConnell Republicans, and the Trump GOP will get all the credit.

Progressive members of Congress — including Reps. Khanna, Ocasio-Cortez, and Omar — are calling on President Biden and Vice President Harris to set aside the ruling of the Senate Parliamentarian and include a minimum-wage increase in the COVID relief package.

Finally: The former President spoke at CPAC yesterday, and spent most of his time pushing the Big Lie and/or enumerating a hit list of 2022 GOP opponents (chief among them Liz Cheney and Mitch McConnell). I’m really conflicted when it comes to him. I am mostly inclined to ignore him because he is out of power. But I also don’t want to ignore him for so long that he quietly re-amasses power. But also, how does he re-amass power unless we give him the attention he craves? He gave his first speech yesterday since leaving office. It’s getting some coverage, but outside of the typical right-wing channels, it’s not getting a lot. I’d like to keep it that way.

Mostly, however, his background presence — and the anti-Democratic threats he made during his speech — drives home how urgent it is that we scuttle the filibuster and pass the John Lewis Voting Rights Advancement Act. Given what the GOP is trying to do in order to suppress the vote in 2022 and 2024, it could be the most important piece of legislation of this generation.