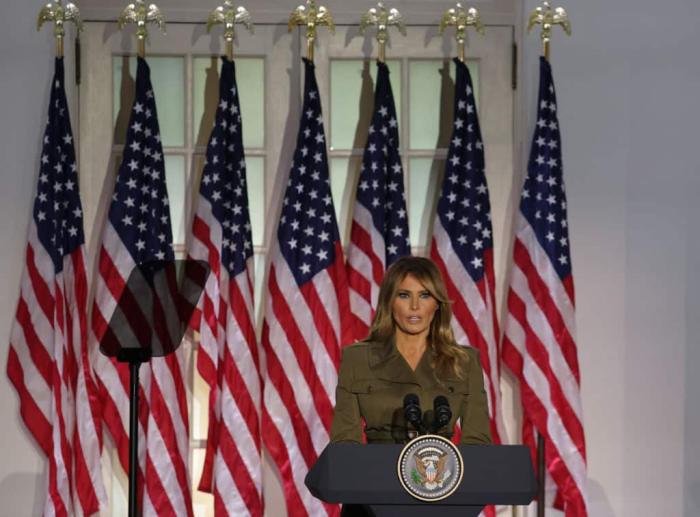 Melania Trump Is Not Your Damsel in Distress: She's As Bad as the Rest of the Trumps

As Donald Trump continues to dig in his heels on the golf course and pretend that the most mundane aspects of democracy are a shadowy conspiracy against his good name, the rest of the world awaits the future of the American Presidency. Joe Biden will be the 46th President of the United States and the fight to bring the nation back to a semblance of decency following four years of fascistic ineptitude shall begin. Of course, that doesn’t mean that we can’t have a little bit of fun until then. The jokes have written themselves for a long time now and the sheer hilarity of moments like the Four Seasons press conference mix-up will only get funnier over time. Donald Trump will leave or be removed from the White House along with his family of goons and hucksters who make the Roys of Succession seem well adjusted. Alongside him — or, more likely, a couple of steps behind him with her face frozen in a look of ceaseless disdain — will be Melania, his third wife and the mother of his youngest son, Barron.

One of the most persistent narratives of this ungodly Trump administration and the ghoulish soap opera of his family’s corruption has been the motion that Melania is an unwilling participant in this drama. At best, she is a trophy wife whose dreams of a quiet life cloistered from reality by her husband’s inherited wealth met a dramatic end. At worst, she is a borderline kidnapping victim whose disdain for her position is almost commendable in its potential camp appeal. Add to that the clone and hired double conspiracies and the Damsel in Distress tales form easily in the minds of billions of horrified voyeurs. It would be almost too perfect for this story of a deranged rich boy with daddy issues and no tenable connection to the real world to end with his younger, clearly disinterested wife kicking him to the curb the moment he loses the power he so desperately craved. It would also be total bullsh*t.

Melania Trump, you are a free woman !

I can’t wait for Melania to break free and write her tell all.

For a long time, people were rather agreeable to the women in Trump’s life. Long before we tried to spin the narrative of Poor Melania, Ivanka Trump had made a name for herself as the one in the family it was OK to like, the modern-day #girlboss who took her infamous surname and created something more palatable with it. Tiffany, the ignored other daughter, seemed sympathetic as the Trump kid who had the good fortune to be as detached from her father’s influence as she possibly could. The scurrilous bad faith focus of white feminism often encourages people to give women like the Trumps the benefit of the doubt. After all, they can’t possibly be as bad as Donny, right?

So much of that narrative relies on the infantilizing of said women, positioning them as reluctant sidekicks dragged into the darkness by a malevolent man. A lot of those assumptions are rooted in our basic understanding of the position of First Lady, or at least our more archaic takes on it. Women like Hillary Rodham Clinton, Michelle Obama, and even Laura Bush did a lot to turn the FLOTUS job into one of active labor rather than decoration, but it’s still easy to categorize it as a spousal requirement. It was one that Melania clearly had no interest in, as evidenced by her hilariously inept Be Best campaign. Her obvious resentment for the work of being both First Lady and Mrs. Trump added fuel to the fire that she was a mere doll for her husband, a ball-jointed figurine he could shape into the desired poses. Poor Melania. Free Melania. It must be so hard for Melania.

The ability to make these assumptions, which I consider needlessly generous at best, requires the wearing of blinders that block out several years of complicit actions and Melania’s willingness to parrot her husband’s racism when the occasion called for it. This is the same woman who repeated the vile birther conspiracies against Barack Obama while her hubby was turning it into his primary political agenda. As revealed in audio released by former advisor Stephanie Winston Wolkoff, Melania’s response to her husband’s policy of separating children who crossed the border with their parents was, ‘Oh, what about the children that they were separated? Give me a fucking break.’ She plagiarized Michelle Obama more than once and dismissed her husband’s ‘grab her by the pussy’ comments as ‘locker room talk.’ She has done everything in her power, as limited as it may be, to ensure that her sh*tty racist fascist of a husband is supported. No amount of gif-ready frowns or pulling away from his touch will balance out the active damage she caused over the past four years.

And yet there are still so many people, liberals who should know better, who have latched onto the Free Melania narrative, a falsehood that only helps her and women like Ivanka to rehabilitate their tainted images as they ready themselves for a post-45 life. Oh yeah, be prepared, because that is definitely going to happen. People are hungry for gossip, now more than ever, and the continuing bad Bravo reality series quality of the Trump dynasty is catnip for the entertainment industry. They can’t wait to hand out book deals to this lot, fling money at them for exclusive interviews and speaking engagements. Agents are undoubtedly scurrying to represent Melania in the hopes that she’ll divorce Donald and get ready to tell all. They’ll happily aid her in her PR agenda to pretend the previous four years either didn’t happen or were simply something that happened to her when she was really key in making them happen. I don’t care if she didn’t get the quiet rich lady life she wanted. I have no sympathy for her oh-so-hard life in the most famous building in America, decorating Christmas trees against her will and looking sad that her husband seems more interested in his own daughter than her. I don’t want to see any glossy autobiographies on the shelves of my local bookshop promising me the ‘inside story’ on life as First Lady or the ‘real’ Donald Trump. I have no desire to be an assistant in the whitewashing of history, all to appease some outdated societal notion that rich white women are forever innocent.

So, don’t let the door hit you on the way out, Melania.

← Reddit Asks the Question: 'What Will Never Be the Same Once the Pandemic Is Over?' | Louis C.K. Thinks He's A 'Great Martyr for History' →