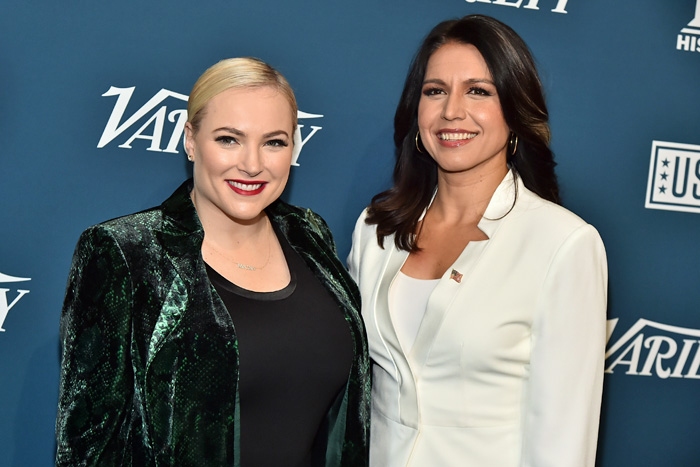 I’m not sure if everyone is aware of this, she rarely talks about it, but Meghan McCain is the daughter of the late Vietnam POW and Arizona Senator John McCain, who himself was the son of a Navy admiral. Military tradition runs deep in the McCain family. The majority of her brothers have served in the armed forces, and despite the fact that one of them will apparently murder government officials if they try to take away his pew-pew toy, Meghan is deeply reverential of our nation’s veterans. That’s not necessarily a bad thing, provided you’re just as eager to care and honor your promises to those veterans as you are to shove them into a meat grinder and order them to unnecessarily murder brown people in the name of American imperialism.

With Veterans Day around the corner, Meghan has been especially leaning into her deep love for the troops on Twitter. In fact, the header photo above is Meghan attending Variety’s 3rd Annual Salute to Service with Tulsi Gabbard after she got read for filth by Joy Behar earlier that same day. You see, Meghan believes in “automatically” giving veterans a pass — which most people with military experience will tell you is a terrible idea — and apparently that pass extends to anyone who shows up to fancy dinners now. Meghan has very, very few good qualities, but one of them is being a goddamn battle-ax when it comes to anti-vaxxers, which makes this photo extremely disappointing.

Really wonderful afternoon ⁦@Variety⁩ salute to service luncheon celebrating all the servicemen and women who serve our country so courageously and defend freedom. Was honored to receive an award. ⁦@TulsiGabbard⁩ ⁦@JennyMcCarthy⁩ 🇺🇸🇺🇸🇺🇸 pic.twitter.com/KcyZAPOVc3

On top of pretending a pile of dead children don’t lie at Jenny McCarthy’s feet, Meghan continued to reinforce her brand as #1 Troop Lover by holding an ESPN panel honoring veterans and auctioning off The View tickets to benefit Homes For Our Troops. Snarkiness aside, there are worse things Meghan could be doing with her time. If she’s helping injured combat vets find a home, I’m not gonna slight that. Where I take issue is when “Honoring the Troops” becomes nothing more than pageantry and stops short of blind party allegiance. Granted, during Donald Trump Jr.’s disastrous appearance on The View, Meghan seemingly made Junior answer for his father insulting Gold Star families, but it mostly became about Meghan and Kimberly Guilfoyle both weeping about how much they miss working together at Fox News. (Yup.) Plus, this beautiful chef kiss of a tweet was spot-on:

So now that I’ve over-established how much Meghan Loves The Troops™, surely she’ll be the first one to take Donald Trump to task for admitting that his foundation looted donations to a veterans charity for his own personal and political gain. That seems like something that should make Meghan McCain so mad that she scales Trump Tower and squawks “MY FATHER” into the New York skyline until an army of pterodactyls attack. Seriously, stealing from the troops? How is she not glowing green and wearing nothing but a tattered pantsuit by now? (This is veering way too far into creepy fan-fiction. You’re right.) And, yet, I’m not seeing a peep about it on Meghan’s Twitter. Maybe she saved it for this morning’s panel. Via The Daily Beast:

After the rest of the panel loudly criticized Sen. John Kennedy (R-LA) for calling House Speaker Nancy Pelosi “dumb” at a recent Trump campaign rally, claiming it showed the Republican Party has morphed into Trump, McCain claimed both sides were equally to blame for such behavior.

“We have congresspeople when they get elected saying ‘impeach the [motherf**ker],’” McCain said, drawing her first bleep from the control room. “It is across the board on both sides.”

“This gutter politics, absolutely indecent, uncivil, disgusting dialogue is across party lines,” she continued. “It is everywhere in this country. Yes, it started with Trump, but it’s infiltrated everywhere.”

Hmm, wow. I guess “both sides” using naughty words is more important than illegally using funds meant for veterans charity to pay for paintings and flag poles at the president’s golf course. Boy, do I feel stupid. If the Best Troop Lover That Ever Was didn’t feel the need to pull her signature move of derailing every discussion toward whatever topic is on our mind that day — typically herself — maybe the lack of “civility” in government truly is a bigger crime than pilfering charity donations for veterans. Which is weird, because doesn’t Meghan McCain often get her shoulder pads in a hunch over P.C. culture run amok? Why, yes, she does!

Meghan McCain cannonballs into the Scarlett Johansson and Woody Allen debacle, but only so she can boost Dave Chappelle's Rotten Tomatoes score?

What in the fu- https://t.co/VFfOZmd9pl

I don’t want to shock anybody here, but I think Meghan McCain might be full of shit. Don’t quote me on that, and I should probably write about her 800 more times just to be sure, but call it a hunch…

← Trumpdates: Election Night Kicks Donald Trump in the Teeth | No, 'Jojo Rabbit' Is Not the New 'Life Is Beautiful' →