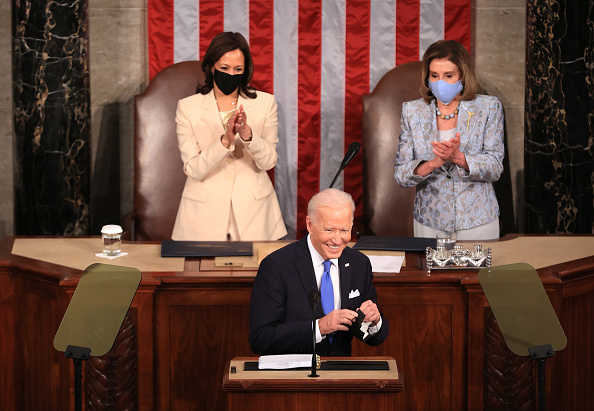 What If, and I'm Just Spitballing Here ... But What If He's Actually Just a Good Person?

Last night, Joe Biden gave a speech commemorating his first 100 days in office, and also laying out his plans for a socialist mecca where only gay people can go to restaurants, Americans will only be allowed four hamburgers a year, and lasagna will be abolished.

wtf even are some of these??????? pic.twitter.com/cRpp1qFkXR

The speech began with a historic moment, and I don’t want to take anything away from it because it was cool, but also, it’s 2021. You’d think we’d have had a Madam President by now, too.

Biden touted his accomplishments, so far, namely the COVID stimulus deal, which will not only get the United States back to pre-pandemic levels by this summer (according to figures out this morning) but will cut childhood poverty in half by the end of the year. Y’all: That’s amazing, particularly for a guy we hired thinking that he’d — at best — stop the bleeding. But Biden is 78, he’s been waiting his whole life to do this, and he is very much in go-for-broke mode, trying to use this moment in history (and his tiny majorities in Congress) to transform the country by redistributing the wealth, much to Mitt Romney’s chagrin.

c-span cutting to mitt romney’s reaction as biden was talking about the wealthy paying their fair share in taxes really is the funniest thing i’ve seen tonightpic.twitter.com/fNu8bet0l0

Meanwhile, he’s got two more major spending bills in the works. They would provide millions of jobs, finance universal pre-kindergarten, provide a federal paid family and medical leave program, provide free community college for all and make college far more affordable for everyone else, expand subsidies under Obamacare, and extend that child-tax credit that erases half of childhood poverty into 2025 (and hopefully beyond). He’d pay for it by raising taxes on the top 1 percent by 3 percent.

Biden also called for legislation to improve policing and restrict access to high-powered firearms, and he came to the defense of transgender people. “For all transgender Americans watching at home, especially young people who are so brave, I want you to know that your president has your back,” he said. A 78-year-old white dude from Delaware said that, y’all. Forget how far in the 100 days since Trump; look how far we’ve come even since Obama.

The man has met the moment more than I ever could have anticipated. I don’t know what’s going on in the man’s head. He’s 78. He may not run for reelection again. He’s following the worst President in America’s history. He’s also experienced more personal tragedy than any of us should ever have to bear. Seriously, I don’t know how he wakes up every morning, and I don’t think that most people appreciate how profoundly those losses may have affected him. You don’t go through that without amassing reservoirs of compassion. Reservoirs. Maybe he’s not thinking about “politics.” Maybe he really just wants to do what is best for the country. Maybe he’s motivated by an actual desire to improve the lives of the people who need it the most? How weirdly revelatory is that?

It's past bedtime for Sleepy Ted Cruz. This is the same guy who calls President Joe Biden Sleepy Joe. pic.twitter.com/beQdNR8ecH

Neither was the speechwriter for the previous President.

Republican Tim Scott gave the reaction speech, although he responded to a speech that Biden didn’t actually deliver.

I could have sworn I heard Senator Tim Scott, the sole Black Republican in the Senate, claim tonight “America is not a racist nation.” But I couldn't have. That's absurd.

Notably, he also said that America is not a racist country. And yet also …

And that’s all that needs to be said about that.

I actually just laughed. “America is not a racist country” from Tim Scott is literally a new level of gaslighting hell.


← Finally, Britney Will Get to Speak for Herself | Michael Collins, Apollo 11 Command Module Pilot, Dies at 90 →