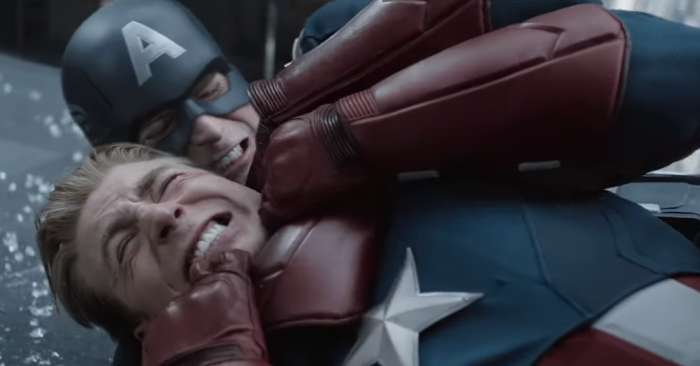 Over the weekend it was revealed that Pulitzer Prize-winning cartoonist and author of one of the definitive fictional treatises on Nazism Art Spiegelman recently pulled his introduction to Marvel’s new comic collection, ‘Marvel The Golden Age 1939-1949,’ after the publisher insisted that he remove a reference to Donald Trump that drew parallels between the American President and Captain America’s Fascist arch-enemy The Red Skull. ‘Maus’ author Spiegelman’s intro was to include the line, ‘In today’s all too real world, Captain America’s most nefarious villain, the Red Skull, is alive on screen and an Orange Skull haunts America,’ but this was rejected by Marvel who said they were trying to remain ‘apolitical’.

A form of the intro was later published in The Guardian, in which Spiegelman described his dealings with Marvel:

When the Folio Society, venerable publisher of luxurious illustrated books since 1947, decided to plunge in with a deluxe compilation of golden age Marvel comics, they invited me, as a graphic novelist and comic book scholar, to write an introduction to the book. Perhaps they misguidedly figured that I might lend the endeavour a fig leaf of respectability.

I turned the essay in at the end of June, substantially the same as what appears here. A regretful Folio Society editor told me that Marvel Comics (evidently the co-publisher of the book) is trying to now stay “apolitical”, and is not allowing its publications to take a political stance. I was asked to alter or remove the sentence that refers to the Red Skull or the intro could not be published. I didn’t think of myself as especially political compared with some of my fellow travellers, but when asked to kill a relatively anodyne reference to an Orange Skull I realised that perhaps it had been irresponsible to be playful about the dire existential threat we now live with, and I withdrew my introduction.

Here we f**king go again, I guess. If ever a reminder was needed that big business will always either actively support the hard-right or turn a blind eye to it, here we have it. Remember how the capitalists cheered and the markets rallied when fascist Jair Bolsonaro came to power in Brazil. Remember how Disney worried that the anti-Nazi satire Jojo Rabbit would hurt their brand. Remember, indeed, how many industrialists preferred the rise of Hitler to a socialist Germany in the 1930s. Capitalism will always side with fascism before socialism. Social progress is only tolerated until it threatens the bottom line.

Yet the picture here is even more dangerous than a simple ideological aligning between corporations and the hard-right. As ahistorical as it would be to try to divorce a medium that arose in many ways in response to the fascism of the 1930s from its political roots, it would be one thing if this was only what Marvel claimed it was: A ridiculous attempt at some sort of ‘neutrality’. A fear of seeming ‘political’ in highly politicised times characterised by an international wave of fascism would be cowardly and complicit, yet it would still be better than the reality. The truth with Marvel is unfortunately even more insidious, and their link to Donald Trump more direct. Four words: Marvel chairman Ike Perlmutter. As Spiegelman himself notes at the end of his piece in The Guardian:

A revealing story serendipitously showed up in my news feed this week. I learned that the billionaire chairman and former CEO of Marvel Entertainment, Isaac “Ike” Perlmutter, is a longtime friend of Donald Trump’s, an unofficial and influential adviser and a member of the president’s elite Mar-a-Lago club in Palm Beach, Florida. And Perlmutter and his wife have each recently donated $360,000 (the maximum allowed) to the Orange Skull’s “Trump Victory Joint Fundraising Committee” for 2020. I’ve also had to learn, yet again, that everything is political… just like Captain America socking Hitler on the jaw.

The response on Twitter to Marvel’s complicit f**kery was predictably scathing:

The idea that Marvel Comics is trying to stay apolitical is fucking gross. This is a phenomenal essay by Spiegelman, and I’m glad The Guardian published when Marvel wouldn’t allow it. https://t.co/UYY99ReTcU

Can you imagine having the stones to tell the creator of Maus that he doesn’t have the right to talk about fascism? https://t.co/q6U8cg4AF0

I'm glad Art Spiegelman pulled his essay instead of bowing to Marvel's pressure to change it.

You don't get someone like Spiegelman to write an essay and then demand it be apolitical.

Reminder that Marvel is led by a fierce Trump ally who is endangering our lives. Kudos to Spiegelman for taking him on directly in this excerpt:https://t.co/t40x6LzV4B https://t.co/PksvkXvnYc

going to be wild when Dan Crenshaw uses this to accuse Art Spiegelman of anti-semitism https://t.co/EzIVu4Dx8n

imagine the level of corporate cognitive dissonance you have to be on to hire Art Spiegelman and then be like "hey, don't, uh, don't do any politics"

This feels like a horrible dystopian future. The guy who wrote the definitive nazi fiction is being erased for checks notes…
Calling out nazi behavior? This is a very bad look for Marvel. https://t.co/ulE2I8ncIZ

Executive 1: "Ugh I can't believe this random cartoonist inserted a political reference into his essay."

Executive 2: "Never heard of him, what's his deal?"

>Hire a cartoonist famous for creating a graphic novel that uses cat and mouse metaphors to depict the experiences of surviving the Holocaust
>Be surprised when he relates a modern day political figure to a supervillain (just by moving a color slider tbh)https://t.co/raCudQv2R0

Comics never have - and never could be - apolitical. Marvel’s move here proves yet again that the company is not a progressive force and that it is as likely as ever to just drop any gains in representation at the drop of a hat should the tide turn. https://t.co/X4urRfh7ZB