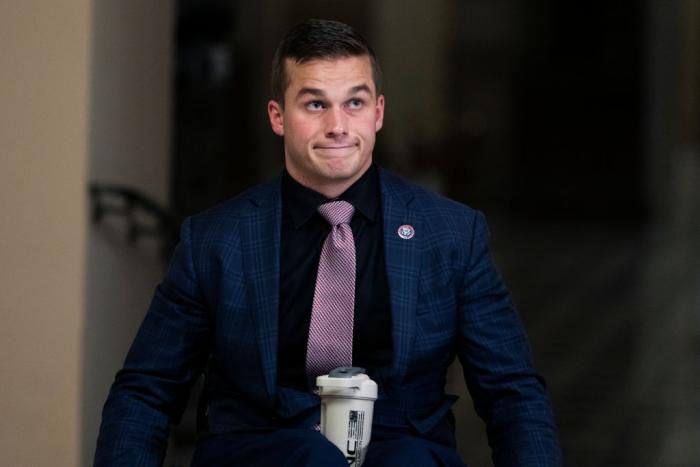 Far be it from me to kink-shame. If dressing like Roger Rabbit and getting stepped on by a statuesque young woman dressed as Jessica does it for you, that’s your business. Who is a man with my browser history to judge? I swear to god some of those clicks were purely research.

But Madison Cawthorn needs to learn some discretion if he wants to get invited back to Kevin McCarthy’s home for the next key party. Last week, North Carolina’s least favorite Mensa member went on a podcast hosted by John Lovell, who after a few more shameful clicks I’ve learned is a right-wing Christian warrior who writes think-pieces like “Why Wokism Is Causing Decay in America’s Defenses” — he really hates Chinese cooking vessels — and “How Suffering Can Save Us All.” During their basement chat, Cawthorn outed a number of senior Republican Congressmen as dirty old men. Shocking, I know.

Alright, maybe I’ll kink-shame a little because the last time I saw a set that creepy it was filmed in the San Francisco Armory. I don’t even want to think about what terrible things that blue-haired doll behind Madison has witnessed. But enough about what a blacklight would pick up. Cawthorn told Lovell:

“The sexual perversion that goes on in Washington, I mean—being kind of a young guy in Washington, where the average age is probably 60 or 70,” Cawthorn said, “and I look at all of these people, a lot of them I’ve looked up to through my life … then all of a sudden you get invited to, ‘Oh, hey, we’re going to have kind of a sexual get-together at one of our homes, you should come!’ And I’m like, ‘What did you just ask me to come to?’ And then you realize they’re asking you to come to an orgy. Or the fact that, you know, there’s some of the people that are leading on the movement to try and remove addiction in our country, and then you watch them do a key bump of cocaine in front of you.”

A couple of things. First, no one knows what a key bump is unless they’ve already snorted coke off a filthy car key, or like me, they looked it up on Urban Dictionary after they heard Cawthorn talking about it. Second, Cawthorn’s told us over and over again how little respect he holds for Dems, so “60 or 70-year-olds he’s looked up to” are obviously on the right side of the aisle. I’m sure you’re as shocked as I to learn our modern moral warriors are coke-fueled sex fiends. More shocked were Cawthorn’s fellow Republican Congressmen who find questions about their sexual escapades uncomfortable. Rep. Steve Womack told his colleagues that many of them “go to bed at 9 p.m.” — YEAH THEY DO — and use fax machines and flip phones. This matters because sexual deviancy never existed before the Internet and can only exist in the presence of WiFi. House Minority Leader Kevin McCarthy has promised to have a sit-down talk with Cawthorn about running his mouth as soon as his latest STD panel comes back.

Of course, everything Madison Cawthorn says must be taken with a grain of salt the size of a Buick. He’s lied about training for the Paralympics, his business acumen, and being a Naval Academy candidate. He recently called Ukrainian president Volodymyr Zelenskyy “a thug” during an appearance in North Carolina, a move that even the pro-Putin Republican wing found foolish given the current (accurate) view that President Zelenskyy is a goddamn hero protecting his country. He’s claimed to use his wheelchair to sneak weapons into the Capitol Building. He talks a lot without saying anything of value, and it’s entirely possible the last time he told the truth was when he admitted visiting Hitler’s compound was on his bucket list. Either way, Cawthorn’s dwindling capital with his colleagues and constituents doesn’t bode well for his future prospects. Or it wouldn’t, in a smarter era. In this one, he’s probably destined for the Presidency. If he wins, I predict he’ll be the first American President to start an armed conflict with our national foliage.