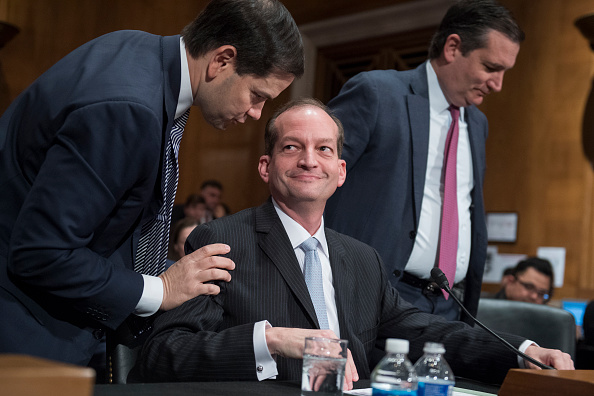 Democrats have been calling on Labor Secretary Alexander Acosta to resign for days over the sweetheart deal he negotiated as a U.S. Attorney in 2008 for Jeffrey Epstein, and now that he has, it’s little more than a headline story, although I suppose that’s the way it’s supposed to work. Someone does something bad, we create a big stink, we put pressure on them to resign, they try to put out the fire, they fail, and eventually they do resign. It’s actually pretty remarkable how effective public pressure has been in removing employees from the White House.

On the flip side, Trump usually replaces these people with even worse people, and he often names them as “acting” cabinet officials in order to get around Senate confirmation.

In January, Trump said "I sort of like ‘acting.’ It gives me more flexibility.”

In any respect, Trump says that Acosta resigned on his own, but that’s probably not entirely true. He was probably forced out after the White House told him not to hold a press conference. He did anyway, and then he performed poorly.

Acosta's folks thought he OK during his press conference, and were bullish yesterday. But Trump didn't like what he saw on TV, and WH was incensed he ignored their orders to shut up. As we reported, Acosta had hoped to survive until next week's cabinet meeting — but he didn't.

Ultimately, this is the long and short of it:

The Labor Secretary resigned in disgrace for giving the President’s friend, neighbor, and fellow sexual predator a sweetheart non-prosecution deal, the President announced.

And that’s that. But, without comment, I am going to leave this here for you.


← One Online Platform, Netflix, Takes On Another, Facebook, in 'The Great Hack' | Review: 'Ringu' Sequel 'Sadako' More Snoozy Than Scary →