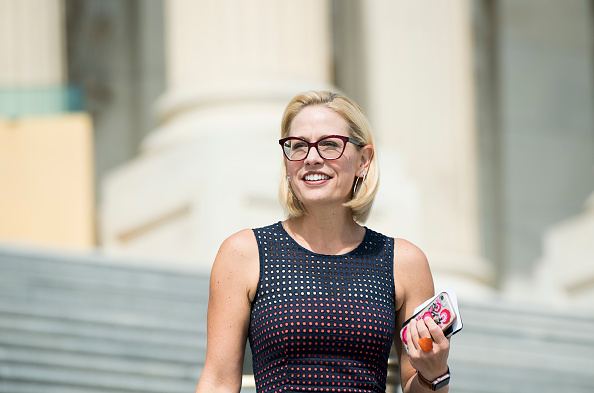 Kyrsten Sinema Is the Worst

Currently, there’s an infrastructure bill working its way through Congress, as well as an expansive $3.5 trillion social policy bill that would basically reshape America’s social safety net, provide affordable child care, two years of higher education, paid family leave, and extend the more generous child tax credit. The two bills are the cornerstones of Joe Biden’s domestic agenda. The infrastructure bill is good in the Senate, but House progressives are refusing to vote for it unless the Senate Democrats move forward with the social policy bill, and the social policy bill — being pushed through the reconciliation process — is being held up by … Joe Manchin and Kyrsten Sinema.

Democrats expect that they will have to shave the $3.5 trillion bill down to appease Manchin and Sinema, but as of now, no one knows exactly what Manchin and Sinema will approve, which is bogging down the entire legislative process that’s already complicated by the fact that those spiteful Republicans voted to block a bill that would raise the debt ceiling and fund the government beyond Thursday.

Manchin and Sinema are now both expected at the White House today. As of last night, there had been no agreement on a top line number for the reconciliation package and aides declined to say if the two moderates had told Biden their specific demands.

Meanwhile, today Sinema is scheduled to have a fund-raiser with five business lobbying groups, many of which fiercely oppose the bill. The fund-raiser is being held in an “undisclosed location,” and checks between $1,000 and $5,800 are payable to Sinema for Arizona. Sinema — who is also raising money from private equity groups — is also unsurprisingly opposed to rescinding President Trump’s tax cuts for corporations and for the wealthy.

I repeat: This supposed Democrat refuses to raise taxes on the top one percent.

Oh, and also: After a Big Pharma fronted group spent $600,000 promoting Sinema in Arizona, she declined to back Biden’s effort to lower the cost of prescription drugs (Sinema is also the sixth-largest Senate Democratic recipient of campaign money from Big Pharma, with over $500,000 in campaign funds).

In other words, Biden’s entire domestic agenda — and that includes Biden’s attempt to raise the minimum wage earlier this year — is being held up by Sinema, who is being funded by private equity groups, corporations, and Big Pharma.

Over the weekend, the Arizona Democratic Party passed a resolution threatening a no-confidence vote against Sinema if she refuses to support Biden’s agenda and vote to eliminate the filibuster. It’s a potential career killer, but Sinema is not up for reelection until 2024, by which time the Democrats’ opportunity to reshape the American economy will almost certainly have passed.

Good morning to everyone except Kyrsten Sinema.