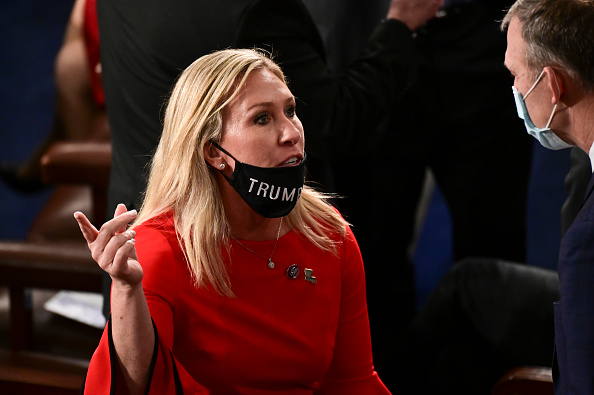 K-Pop Stans Stepped All Over the QAnon Lady's Impeachment Attempt

“I am told that Nancy Pelosi tells Hillary Clinton several times a month that ‘we need another school shooting’ in order to persuade the public to want strict gun control,” Rep. Marjory Taylor Greene wrote on Facebook in December 2018. In fact, it’s recently come to the surface that Greene was not only a Sandy Hook truther, but also a Parkland truther, someone who believed that the Sandy Hook and Parkland shootings were a hoax, that they were all crisis actors. Greene suggested on social media that they were false flag operations orchestrated by Democrats in order to curtail Second Amendment rights.

She is a Congressional representative.

She also followed through on her promise to file Articles of Impeachment yesterday, in Biden’s first full day of office. She accused him of being “unfit,” and further accused him of “blatant nepotism” with regard to his son, Hunter Biden. She filed these articles without a hint of irony.

But then, that’s what QAnon wackadoos will do.

“Because Democrats control the House, there is no indication the House Speaker would consider taking up these articles. It is also not clear whether other government representatives will be following her lead,” reported WTVC, a Sinclair Broadcasting group, which itself is an unfair characterization. Nancy Pelosi will absolutely not take up the articles, and it is very clear what other government representatives will be doing, which is to ignore this lady and get on with their lives.

I would also like you all to know that Majorie Taylor Greene’s impeachment bid is not even original. Representative Al Green, a Democrat from Texas, filed articles against Donald Trump twice before it was cool.

In the meantime, the #ImpeachBidenNow hashtag got off to a rocky start today when K-Pop stans — our truest social media heroes — hijacked it, and now it’s trending for all the best reasons!