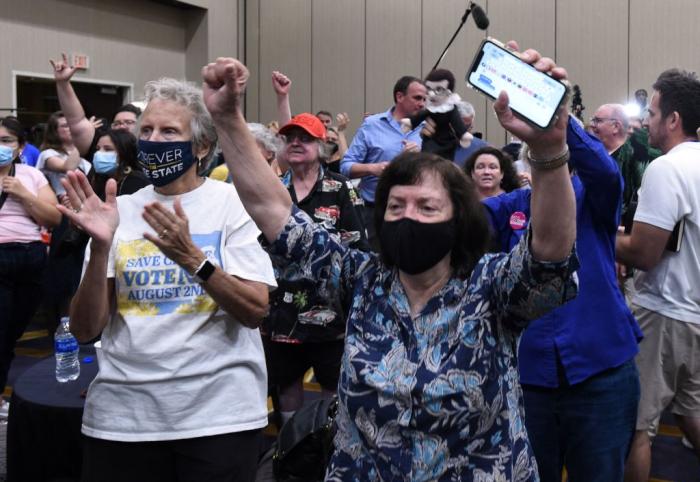 The Supreme Court’s disastrous Dobbs decision sparked a wave of abortion restrictions that have turned women’s healthcare into a battlefield in ways Democrats and health professionals have warned against for years. Despite Republican and religious fundamentalist attempts to dismiss such concerns as exaggerated when compared to an embryo’s right to life (they’re not), women’s autonomy and physical wellbeing has taken a back seat to making sure more unwanted babies end up in the nation’s overwhelmed foster care systems. But the grim circumstances faced by America’s pregnant women have also inspired resistance from unexpected quarters, as unenthusiastic voters and even some Republicans have turned out in favor of continued reproductive freedom.

Kansas became a prime example of this movement yesterday when nearly 60% of voters confirmed the right to an abortion in the state Constitution. Anti-choice politicians and fundamentalists moved swiftly to strip protections in a post-Dobbs world, and the Republican legislature added a deliberately obtuse ballot question to this year’s August primaries when independent and Democratic turnout is historically low. Despite the state’s blatant attempts to sway Kansans into voting against their own best interests, voters turned out in large numbers. Nearly 900,000 Kansans voted on the question, dwarfing both Republican gubernatorial primary votes (350,000) and the Democratic senatorial primary (250,000). Millions were spent in public awareness and educational campaigns by both sides, although calling the nearly $5 million spent by Catholic organizations and their allies as “education” is a misnomer. Ads and public awareness campaigns from the Right spread lies about state funds being used for abortions, and thousands of voters received misleading texts instructing them to vote Yes to secure abortion protection in the days before the vote.

60% of Kansans voting for abortion rights is an unexpected delight. Though a majority of Americans are generally in favor of female autonomy, Kansas isn’t what anyone would call a liberal utopia and still has a 22-week limit on legal abortion. Trump easily won the state in 2020 by more than 200,000 votes, and in 2016 by more than a quarter million. Democratic Governor Laura Kelly has an uphill battle to hold onto her seat. Despite conservatives’ firm grip on the state, however, it appears liberal policies remain popular when divested from Democratic politicians. I’m not sure how else to describe such a resounding win in a state where even a centrist and generally popular Democratic politician like Joe Biden can’t squeak out a win or even a close loss. That’s not a criticism of Biden, not with rightwing media, churches, and local politicians doing everything they can to breed suspicion of even the most moderate Democratic candidates. But it’s a problem.

Regardless, the war for reproductive freedom is far from over in the state. Anti-choice organizations and politicians have promised to try again, and have proven they’re not above misleading and outright lying to voters to get results. Near-absolute bans in states like Texas and Missouri and hostility in states like Mississippi that have forced the closure of their last abortion clinic prove anti-choice fundamentalists aren’t giving up. Decades spent grinding away at Roe protections proved a winning strategy, and the conservative majority of the Court has already sacrificed its legitimacy in favor of “originalism,” which means whatever they want it to mean at any given moment. Dobbs just allows them to work more openly. Nor are other civil liberties many now take for granted. A Court willing to throw out Roe will do pretty much anything in the name of conservative values. Contraception, same-sex marriage, and even interracial marriage are at risk, particularly as a fresh wave of local, state, and federal MAGA candidates for office promise to disregard electoral legitimacy. The right to an abortion isn’t safe anywhere, save perhaps a few staunchly blue states that have or are working on enshrining permanent access in their Constitutions. Even then, we can’t take anything for granted. But that doesn’t mean we shouldn’t celebrate an overwhelming win. Over a half million Kansans came out yesterday to support a woman’s right to choose. That’s wild. And it’s up to us to do the same.


← Jay Leno Swears He Didn't 'Deliberately Sabotage' Conan | It Was a Good Primary Night for Trump and, Counterintuitively, the Democrats →