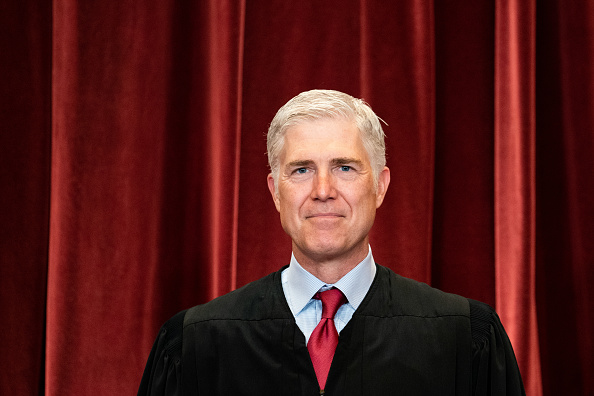 Update: Justice Neil Gorsuch Is a Real Piece of Work

Another Update Clarifying the Previous Update:

More developments on the mask spat — SCOTUS issues ANOTHER statement, this one from the chief justice:

“I did not request Justice Gorsuch or any other Justice to wear a mask on the bench.”

Unlike the earlier statement, this one directly disputes the original report from NPR. https://t.co/jASdJXJbaM

This is turning into a real sh*t show.

Update: NPR may have been wrong in its reporting.

NEW: A statement from Justices Sotomayor and Gorsuch:

"Reporting that Justice Sotomayor asked Justice Gorsuch to wear a mask surprised us. It is false. While we may sometimes disagree about the law, we are warm colleagues and friends."

This doesn’t apparently change the fact that Sotomayor is participating remotely and that Gorsuch remains the only justice who isn’t wearing a mask.

Stephen Breyer was back on the bench today after a false-positive COVID test yesterday. Sonia Sotomayor continued to participate remotely. And as has been the case all week, Neil Gorsuch was the only justice not wearing a mask. Here's a view of the bench from @Courtartist: pic.twitter.com/UY5UoGgNXc

You’d like to believe that in the hallowed halls of the Supreme Court that, despite their political differences, the justices should at least be cordial to one another. This is particularly true because there aren’t supposed to be political differences (idealogical, sure, but not political). You’re supposed to follow the Constitution. And given the “intelligence” of those on the bench, you’d think that they would also understand the science behind mask-wearing.

Even if they didn’t, come on, now: It doesn’t hurt anyone to be respectful of others, even if your Harvard and Oxford-educated self might not appreciate the merits of mask-wearing. But no sir, not Neil Gorsuch.

NPR is reporting that Justice Sonia Sotomayor reasonably didn’t feel safe working from the bench with others who weren’t wearing a mask. She has diabetes, which makes her high-risk, and Omicron is burning through the United States right now, which makes the threat of infection very real. She kindly asked Chief Justice John Roberts if he could ask the others on the bench to wear a mask during arguments, and Chief Justice Roberts agreed.

Neil Gorsuch did not, a doubly jerk move considering that Justice Sotameyer sits next to Gorsuch. Sotomayer now has to listen to arguments on Zoom from home because she values her life. Neil Gorsuch only values his freedom from a thin piece of paper.

Real jerk move, Neil. Real jerk move. Then again, what does one expect from a so-called apolitical Supreme Court justice who has dinner in the homes of Republican Senators.