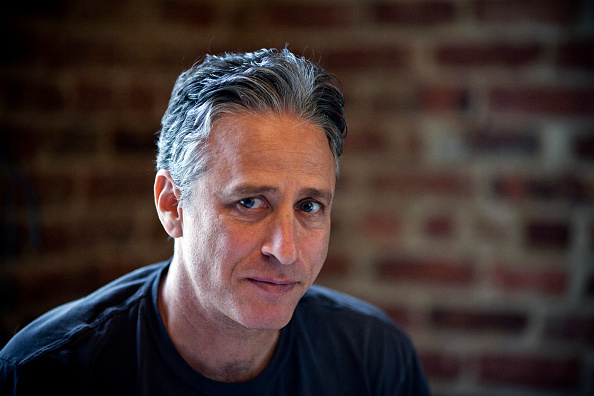 Jon Stewart Praises the News Media's Coverage of Ukraine, Except for That 'S--thead' Tucker Carlson

I still listen to Jon Stewart’s podcast, and I’ll tell you why: Because when he’s not buying into conspiracies about the origins of COVID, or defending Joe Rogan (although, even there, he walked some of that back, conceding that ‘canceling’ is a valid form of protest), or, uh, defending Dave Chappelle (jeez, Jon. You don’t make it easy), he is insightful when it comes to two things in particular: His distrust of the establishment, and he remains one of the best critics of media in the business.

I also appreciate that even he will concede that “I have a lot of blind spots. I have a lot of ignorance,” and likes it when those blind spots are “illuminated.” The week after the Joe Rogan kerfuffle, for instance, he did at least have someone come on his podcast to counter his opinion and tell him why he was wrong and why Rogan is dangerous.

Then the next week, he had on some economists who finally offered some pushback to inflation, discussing the irony of prices going up because of “the pandemic” or “supply chain issues” or “higher hourly wages” but also pointing out how all of these corporations are turning record profits because they absolutely are. This is something I needed to hear because I see it so often right now, even in the media industry, where CEOs brag during earnings calls about turning record profits by simply charging more for streaming services while outside of the context of those earnings reports, they’re like, “We have to raise rates because of the price of goods and services higher.” They don’t have to raise prices. They raise prices because they can. Corporations are taking advantage of inflation, and we all know that if and when inflation is put in check, those prices are not going to go back down. A package of bacon is $9 now. We’ve shown a willingness to pay that much, so no one is going to lower their prices out of the goodness of their hearts.

Apologies for getting sidetracked on inflation, but … it pisses me off, and I haven’t had a good outlet for that anger yet.
Back to the topic at hand: On this week’s podcast, while talking about Ukraine, Jon Stewart did something you rarely hear Jon Stewart do. He praised the news media.

“Let me tell you something about the media,” he said. “These types of stories. Ukraine. The War. These are the stories they are actually built for, and when they are matched with their purpose and there is a story equal to it, boy do they deliver. And they have done a magnificent job of bringing the reality of this story to the public. I have been wildly impressed, and it just shows you what they are capable of when a story is at the level of urgency that they pretend everything else is. And boy, it’s a little heartbreaking, because you see how talented, and committed, and how involved they can be. But when left idle, or left to the currents of their ratings overlords, how their natural and innate abilities are perverted into something way more damaging. But f*ck, man. I don’t know if you’ve seen the coverage, but they have been on motherf**king point.”

“Let me just say, except for Fox,” Stewart added. “Those motherf**kers won’t be satisfied until the axis powers get together and have us joining the other team.”

He did not limit his criticism of Fox News to his own podcast, however. Yesterday, he appeared on the NYTimes Sway podcast. On that podcast, while praising the media and Ukraine, he also pointed out that “Saudi Arabia is still bombing the sh*t out of Yemen,” and America still “bombed the sh*t out of Iraq,” and the “human beings [there, and in Palestine and other places] on the other end of those armaments are just as human-beingy as those in Ukraine.”

He also took direct aim at Tucker Carlson, a lifelong nemesis of Stewart’s. “When you’re dealing with a dishonest propagandist, and that’s what he is, there’s nothing you can take out of context because none of it is real. He’s admitted, when he corners, he lies. It’s all a game. It’s all a performance. Honestly, I have no idea what the f**k that guy believes. Truly. How does anyone go on television and say, ‘Why shouldn’t I be rooting for Russia?’ which by the way I am. He said is straight out. That’s who he is rooting for.”

“… and isn’t that the way we judge dictators and atrocities? ‘Are they nice to me? You know, this Hitler. He’s done some things, but I have to tell you, he always holds the door. Very polite.’ In some ways, you have to ask the question: ‘Why is Rupert Murdoch trying to destroy the fabric of this country? What’s in it for him? I don’t know if it’s ideological, or he just thinks that’s where the money is, but I don’t know how anyone in good conscience can put a sh*thead like that on television every night to say those types of things. I think that’s where the responsibility lies.”

Source: Sway, and The Problem with Jon Stewart