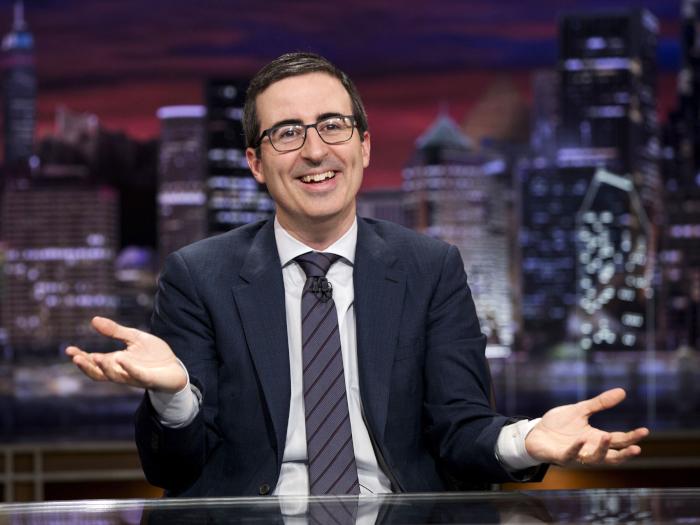 John Oliver Takes a Swipe at the New Host of 'Jeopardy!' Mike Richards

John Oliver typically starts his broadcast each week by devoting a couple of minutes to current events before spending the remainder of his episode on that week’s particular issue. This week, he went long on Ransomware, and as always, it’s worth a look.

Unfortunately, HBO typically does not offer embeds from the first part of the show, where Oliver talked about how our “Hot Vax Summer seems to be giving way to Dipsh*t Autumn” as the Delta variant spreads around the country, particularly among the unvaccinated. Hospitals are being stretched thin, while Florida and Texas account for 40 percent of all hospitalizations in the country. Oliver also called Ron DeSantis a cut-rate Coach Taylor, which is a terrible insult to Coach Taylor, because it implies that DeSantis is worthy of even that. He is not.

He also took up all this controversy surrounding mask mandates in schools, and how some conservatives are comparing wearing a mask to … the Holocaust. He then pivoted to that Tennessee school board meeting that went viral last week. During that meeting, parents called medical professionals “child abusers” and suggested there was a place in hell for doctors who encouraged children to protect themselves (and their parents) from a potentially deadly disease.

“Holy sh*t!” John Oliver remarks. “It is genuinely hard to imagine a five-word phrase less welcome than ‘we know who you are, aside from obviously, ‘new Jeopardy! host Mike Richards.’”

Oliver also spoke of new Texas regulations, of which I wasn’t aware, in which schools are not only not requiring kids to wear masks, but do not have to notify parents of positive cases, do not have to contact trace, and parents are allowed to send in kids even if they are a close contact to someone infected with COVID. Wow! They take their “freedom” seriously in the South.

“What the f**k are you doing,” Oliver asks. Oliver concluded the segment by stressing that mask mandates would not be an issue if everyone in the community got vaccinated. To all of the foolish adults who are not vaccinated, Oliver jokes, “We know who you are, and you’re the f**king problem.”

It is also worth noting that one of the parents in the Tennesee school board meeting was Disney Channel star Leigh-Allyn Baker, who says she gave up her career in Hollywood to take advantage of the “freedoms” of Tennesee, and that requiring them to wear a mask would deprive them of oxygen. Here’s a whole lot of stupid for you:

Leigh-Allyn Baker, known for playing Amy Duncan in #GoodLuckCharlie, speaks out against vaccine and mask mandates at a school board meeting. pic.twitter.com/PKUttMqWj8