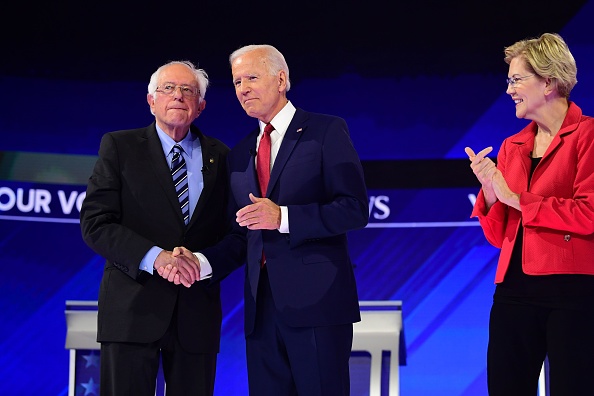 Morning Briefing: One Element Of Joe Biden's COVID Bill May Become the Most Important Piece of Legislation In our Lifetime

I understand that today that the morning briefing will be a placeholder until Kayleigh gets up her post about Prince Harry and Meghan Markle, but while you’re waiting, you should know that after flatlining, the COVID numbers do seem to be ticking down again, ever so slightly. The 7-day average is at 58,000, the lowest seven-day average we’ve seen since October 18th, 2020, 141 days ago. I would love nothing more than to see this trend continue downward as more vaccines are put in arms. A Quiet Place 2 opens in theaters on May 28th. That’s the date I hope to be vaccinated and free to go to the movies. That is my get-out-of-my-f**king-house date.

The big political news, meanwhile, was the Senate’s passage of the COVID relief bill. It wasn’t exactly what we’d hoped thanks to Democratic moderates, who rejected the $15 minimum wage, phased out the direct payments to those making $75,000/$150,000, and added only $300 enhanced employment benefits, but the bill is still about $1.3 - 1.9 trillion better than it would have been had Raphael Warnock and Jon Ossoff not won in Georgia.

Though Senators Manchin and Sinema can be pains in our asses, there is still a huge difference between the bill we got with them versus the bill we would’ve gotten with Mitch McConnell as majority leader. The moderate Republicans offered a $600 billion bill, although McConnell probably would not have passed anything in the end. Thanks to control of the Senate — by the thinnest possible margin — the people who need direct payments the most will receive them; enhanced unemployment benefits will continue through the summer for those who are still out of work; billions of dollars will be distributed to states to account for pandemic shortfalls so that states can continue to pay firefighters and teachers, etc.; and billions more will go to vaccine distribution efforts.

The thing, however, that’s not getting as much play as it perhaps should is the increase of the child tax credit, as well as the fact that half of it will be paid out in direct payments. From the NYTimes:

Obscured by other parts of President Biden’s $1.9 trillion stimulus package, which won Senate approval on Saturday, the child benefit has the makings of a policy revolution. Though framed in technocratic terms as an expansion of an existing tax credit, it is essentially a guaranteed income for families with children, akin to children’s allowances that are common in other rich countries.

For a family with three kids under the income thresholds, for instance, this would mean an extra $800 per month from July to December this year. That is huge. And when families get a taste for it — as the country has gotten used to Medicare/Medicaid and Obamacare — we may find that the increased child tax credit, as well as the monthly payments that go along with it — may become permanent, which is expected to decrease child poverty by half. From CNBC:

With those changes in place, approximately 4.1 million children under 18 would be directly affected and lifted out of poverty and another 5.75 million children would move closer to the poverty line, according to calculations from the CBPP. The expansion of the credit would essentially cut the child poverty rate in half in the U.S.

If we can make it permanent — as Democrats are hoping to do — this would be one of the most important legislative achievements since Obamacare, and it will be a nice thing to run on in 2022. Do you want to continue receiving those $800 monthly checks? Then vote for the Democrats! This is one of those instances, really, where Americans are afraid of socialist policies because they don’t understand them, but they understand monthly checks, and if they continue long enough, those monthly checks become entitlements, and we’d just like to see Mitch McConnell try and take those entitlements away, especially when those entitlements are for kids.

I know that it was a long time ago, and the value of money has changed — although, not by that much, because the minimum wage hasn’t changed that much in two decades — but I knew how much my father made annually because I had to fill out those student aid forms for college every year. He made $9,500 a year working two jobs and raising three kids by himself. It is absolutely insane to consider that — combined with the $600 Trump payments in January — my father would have received $8,000 in direct payments, in addition to another $10,500 under the child tax credit. That would have tripled his annual salary, and during the year of the pandemic, anyway, my family would not have lived under the poverty line, which is $25,000 for a family of four in 2020. In fact, today, a single father with three kids who worked only one minimum wage job for 40 hours a week ($15,800 annually) would — with this child tax credit — cross the poverty line (barely).

Whatever else you want to say about the Biden Administration (and I think they’re doing a solid job given the limitations of the moderates), this bill right here is better than anything that the former President did in four years. That is some Bernie/Warren business right there. They won’t call it socialism or universal basic income, but it’s very similar. I know a lot of our middle-class readers are bummed about the phase-outs for direct payments — as you should be — but for those who live in poverty, this bill is nothing short of life-changing. For most of my teenage years, we ate one meal a day. A bill like this would have allowed us three. I cannot stress just how huge that would have been, and how huge that is going to be for so many kids in similar situations.